Squishy and malleable, colorful and in great peril. That pretty much sums up the creatures in Clay Jam, an arcade game from Fat Pebble that lets you save a world of clay creatures from the clay nemeses that are gobbling them up like tasty appetizers. You've got the power of physics on your side, however, rolling down hills, squishing small monsters to gain mass and make a mad leap from the island to knock the big bad guys away. Heroic! 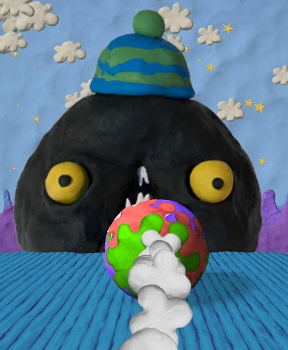 Clay Jam puts you in charge of helping out the mysterious stranger who has come to save the world, a.k.a. a rolling ball of clay. As the ball tumbles across the landscape it absorbs small monsters and increases in size. The larger you are, the bigger things you can pick up, and the more clay you'll gain. But don't go thinking this is Tasty Planet or another Katamari-like game. Instead, you simply control the ball's path by dragging temporary troughs in the ground, directing it left or right to collect more bits of clay. When it reaches the end of the hill, swipe the screen as quickly as you can to get a boost of speed, then crash into the big bad monster at the end and see how far you can send it careening!

The farther you shove the boss baddie, the more clay you earn, and clay can be formed between levels to create/unlock new things, like additional monsters to crush, power-ups, or new hills to roll down. You also get missions to complete for each run, adding a little more strategy to the experience than "go fast and hit stuff". All in all, Clay Jam hits a lot of the mobile sweet spots with a fun casual experience that doesn't get old after hours of play. Plus, who doesn't like a game made entirely out of clay?!

Great graphics, smooth and simple gameplay, and charming art style. I think I'll be keeping this one on my Nexus.

Been enjoying this one a lot. Anyone have tips for getting larger in time to smash the landscape items? For instance, I have never been able to roll over a mushroom on the first hill without a powerplay boost active.

This was fun, but a bit hard to control.

Could be just me, not enough dexterity to move fast enough to collect at the beginning. I wish I had more time to play this one.

If you have not played it yet it is worth the time.