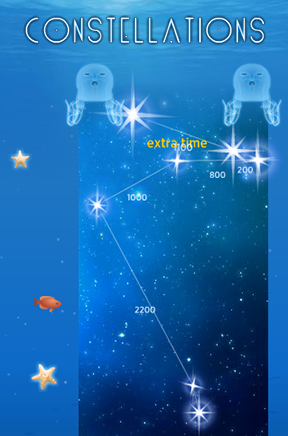 If we humans look at the stars in the sky and imagine images and patterns in the connections between them, then maybe jellyfish also look at starfish and see Constellations? It's a whimsical idea, certainly, and it forms the basis of Orisinal's latest charming arcade game, where tag teams of jellyfish shoot up your browser screen at a click, hoping to skim across a number of starfish and avoid hitting regular fish by chasing them away with the cursor. Occasional power-ups float by but aren't necessarily implemented perfectly; the "star burst" power-up, for example, releases a cluster of starfish, but they've often floated away by the time the next pair of jellyfish is ready to launch. However, artistically Ferry Halim remains at the top of his game. It's the little details like the cute expression of effort on the jellyfishes' faces as they launch themselves up towards the water's surface that make this one such a relaxing delight.

This may be the best game in the Orisinal arsenal of casual gaming to date. It almost lasts too long. Zone out and have fun.