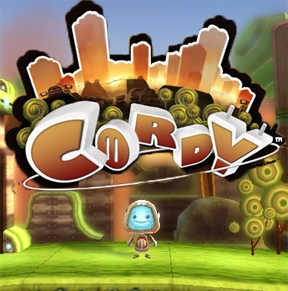 By all rights, Cordy normally wouldn't be featured here. The Unity-based platformer from Silvertree Media is short, incomplete, and borrows freely from games with much larger budgets. It's also an amazing piece of work that just might change your opinions of what browser-based games are capable of.

You guide the TV-headed hero through lush 3D environments, using either the [left] and [right] [arrow] keys or the [A] and [D] buttons, using [up] or [spacebar] to jump. The goal is to reach the door at the end of each level, through pushing buttons, climbing up ledges, and using every part of the environment to your advantage. Controls are fairly solid, and the gameplay is plenty fun, but the thing you're most likely to notice is the graphics. We've seen some great things done with Unity in the past, but this is really in a whole new league. The animations are incredibly fluid, and the backgrounds seamlessly blend natural and mechanical elements for an experience unlike any other.

Anybody who's played the hit Playstation 3 game Little Big Planet is sure to notice more than a passing resemblance here. But rather than adapt an advanced console game into a more simplistic version, Cordy tries to go the other way, by pushing the medium almost until it breaks, leaving us with an unparallelled browser experience. The one obvious downfall of Cordy lies in the length, or rather, lack thereof. With only two brief levels, it will probably take you longer to load the game than it will to complete it. In fact, with the gorgeous graphics, captivating gameplay, and and relative brevity, it almost seems like less of an actual game and more of a showcase for what the Unity platform is capable of. But it's a very GOOD showcase, and with promises of more to come, this is definitely one to keep your eye on. I predict big things from these guys in the near future.

The game is nice, even if this sample is a little bit short.

But the maniability is ugly : the robot feels like a brick to manipulate.

Amazing game! I really want more. The controls are indeed a little bit strange. But I can forget that, the game looks amazing!

If you use Low Quality, it's much easier to move. This is sort of like Little Big Planet.

a huge champion of unity but I fear that it hasn't yet had its day. Although nearly all of the unity games are visually dazzling they generaly don't quite cut it in terms of gameplay or use what unity can offer to their best advantage. A platform a game, almost by definition, is a two dimensional environment and therefore a classic example the wrong type of game for unity. It just gave me a headache and the cutaways made the platforming slow and clunky. I'd like to see unity developers concentrating more on 3D environments for adventure and strategy games, platformers are best kept simple, IMO.

Well, they do say it's a prototype on the main page, so the shortness is to be expected. What's there was pretty nice, except for the music (it's a bit generic, and the loop's very short and doesn't loop cleanly), and the controls took a bit getting used to because of the floatiness. I'm also not crazy about the character design. Still not bad at all for a prototype.

Short, but wonderful! The controls were a little wonky, but nothing unmanageable, I thought. I definitely want to see more from this developer!

I wouldn't say that the controls were wonky... just unresponsive. Graphics were incredible, though.

That was pretty fantastic. Controls had a bit of intentional inertia but I thought they were fine.

(I guess the "macwinlinux" tag is probably wrong... unless I'm missing something on the Unity website)

sure this has been said before, but: doesn't really feel like a platformer-more like an interactive environment.

still, graphics are stunning. would be excited to see these kinds of graphics implemented into browser games with more substance.

keith: Yeah, there's no Unity for Linux yet, but there's been some rumors about the pluginless version of Unity for Google's Native Client also being available for Linux (which would make sense, since Native Client doesn't care about what OS it runs on).

Cute enough, although I found the gameplay clunky. Frankly, two levels was enough, although I liked the 3D well enough. Still compared to the stuff Blurst (for example) has done with Unity (Velociraptor Safari, Jetpack Brontosaurus and Blush), I really don't see where they're breaking any boundaries here.

Hey, I just interviewed the web dev for that demo! Small world... and a beautiful game.

Doesn't work on a Mac either.

[It works just fine on a Mac (I'm using a Mac, so I'm absolutely sure about this). Do you have the Unity plug-in installed? -Jay]

Beautiful graphics even on older systems. Can't complain about the controls, they feel exactly like in Little Big Planet.
Gorgeous level design as well, certainly there were some experts at work.

Oh, this game is gonna be great when it's finished! I can't wait!

Adorable, but too short even for a taste!

Just as I was getting used to the controls, it was over.

I can only think of two browser-based flash games that match the creative exploratory atmosphere as this game. And they both had to do with robots as well!

I can't wait to see how this turns out!

Beautiful-looking, but kinda didn't make me wish for more. The controls are clunky and the gameplay feels like a third-rate NES platformer.

I agree it showcases what Unity is capable of, but I'm sadly one of those weirdos that prefers gameplay over presentation. Nice looks should be a polish of a good game, not the other way around.