Crypt of the NecroDancer

I don't do so well with rhythm and coordination. The trainers at my gym have long since made peace with the fact that trying to get me to do anything that involves more than two muscle groups ends in disaster, and that maybe some people just... shouldn't Zumba, like, ever. It doesn't stop me from trying, though, to the embarrassment of my husband or anyone who has ever been around me while I attempt my best approximation of "dancing", and it definitely didn't stop me from being really, really excited to finally play indie arcade/roguelike hybrid Crypt of the NecroDancer by Brace Yourself Games. In it, you play a young woman named Cadence who literally goes digging for trouble and winds up tumbling into the sprawling crypt of one very unique necromancer. Now, though her heart's been ripped from her by dark magic, our heroine is somehow still moving, but she has to keep to the beat if she wants to stay that way as she battles her way down through the depths filled with monsters, traps, treasure and more to take down the ancient evil once and for all. Now available in early access and playable with either keyboard, controller, or USB dance pad for the brave (or in my case foolhardy), Crypt of the Necrodancer is a fast-paced and gorgeous game that marries strategy with skill and really, really sweet tunes. 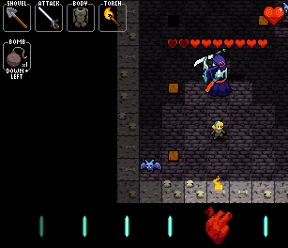 The gist of the game is pretty simple. Your job is to keep Cadence moving and attacking, but she can only do so as long as you tap the directional keys (or buttons or whatever you're using) to the beat. The farther you go in the game, the faster the tempo becomes, and certain stages even have special beats and requirements. The monsters will be moving to the melody whether you manage to or not, and all of them have unique movements and attack patterns you'll need to learn. Experiment with the various shrines you find, be on the lookout for secret hidden portals that could take you to special shops (... or somewhere else... ) and watch your step when there are tiles on the floor. They could do anything from change the tempo of the beat to reveal themselves to be traps! Die, and you'll be booted back to the lobby, where you'll have a chance to buy upgrades before you start all over again from the beginning... don't worry, the layouts, treasure, and enemies are randomized each time! If you're having too much trouble matching the melody, you can always visit the character select area of the lobby and choose to play as the bard, which turns the game into a classic turn-based roguelike. 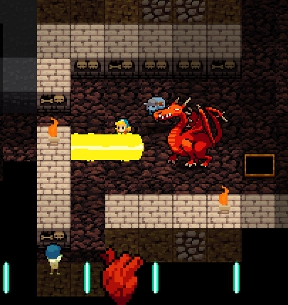 Like any good roguelike, Crypt of the Necrodancer has a lot of treasure to help you out, though you'll have to earn it before you can use it. Diamonds, while hard to find, are used in the lobby between sessions to unlock everything from new items to be found in treasure chests, to permanent upgrades for your character like more hearts. You can't hoard your diamonds, unfortunately, so you have to spend them all in the lobby before you play again or they'll be lost. The other currency is gold coins, dropped by enemies, which can be spent at the shop whenever you come across it for a variety of items, including the golden keys you'll need to rescue the various characters who can appear in the lobby and sell you new items or even offer training. The items you can find while you're playing range from things like torches which will allow you to see farther to different weapons, each of which has its own method of attacking. The spear, for example, allows you to attack enemies one tile away, while the broadsword can sweep three tiles at once. Of course, one of Cadence's most valuable tool might be her shovel, which can let you dig through dirt walls and help get you out of a tight situation... or maybe even find buried treasure! 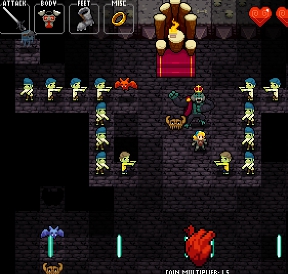 Analysis: It's hard. It's sneaky. It's impossible to play without a grin on your face. Crypt of the NecroDancer is one of the most addictive games you'll ever pick up, and though you can sit down (or stand up!) and play it anywhere from five minutes to hours, you're probably going to want to do more of the latter. Take the challenging roguelike mechanics of Sword of Fargoal, the vibrant retro aesthetic of Spelunky, and then top it all off with Dance Dance Revolution and you have a cocktail for one awesome party game. Although still in early access, the amount of content is pretty mighty indeed. Just when you think you've seen everything, you'll encounter something new... a different enemy, a new altar or floor tile, and as a result, your playthroughs will feel fresh for a long, long time. It's infinitely charming, with its fantastic pixel artwork, but enough can't be said about the stellar catchy soundtrack. You just want more of it, and if ever there were DLC down the line that would add additional tunes to each floor, I would be all over that like funk on the '60s. It would be easy to dismiss Crypt of the NecroDancer on concept alone as a gimmick if you didn't actually get your hands on it, but once you do, it becomes abundantly clear this was made by someone who understands the genre and what makes a great game. 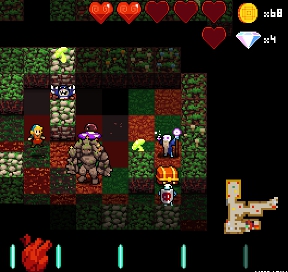 The gameplay itself is incredibly clever and well thought-out, from the way the boss battles are implemented, to the wide variety of monsters you'll encounter on each floor. It's rare for a roguelike to feel like nearly every critter is special rather than relying on pallet swaps or simply beefing up hit points, but Crypt of the NecroDancer's bestiary is full of creatures that look and feel different and compliment one another in ways that make your life difficult. From the monkeys that'll lock you in place to the big beasts that can bust down walls, charge you, or roast you alive, Crypt of the NecroDancer feels varied and challenging. This is especially true once you unlock different zones, and encounter a whole host of new creatures, tiles, environmental hazards, and more. It's even balanced, as zones two and beyond will grant more diamonds to make it easier to purchase upgrades. Likewise, the sheer variety of equipment you can get is pretty impressive, even if figuring out what, precisely, a special item might do isn't always intuitive. Whips can allow you to strike tiles in almost any direction, rapiers will deal extra damage if you're lunging from a tile away, and that's just for starters. It feels like it rewards you every step of the way, and few games can pull that off.

Crypt of the NecroDancer works just fine with the keyboard or controller, but the dance mat is a great fit as well, if with the caveat that it's a lot harder to maintain the beat and move or act in the directions you want without practice. The "dance mat mode" exists, but mostly makes the game easier by virtue of adding less enemies and giving you more items and upgrades right away. There's also the option to put custom music in for any and all of the game's levels, which is done simply by selecting any MP3 you want under the game's custom music level, assigning it to a stage, and waiting while the game processes it. Yes, I played to Journey's Don't Stop Believing, and no, I'm not ashamed. For this game to still be considered Early Access for the amount of content that's in it is sort of amazing because it feels like it's head and shoulders above a lot of finished products already. With tons of unlockables, different modes, local co-op, daily challenges, and more, Crypt of the NecroDancer is one of the best examples of the roguelike and arcade genres to come along in a long time. It looks and sounds absolutely amazing, the clear product of dedicated talent and passion, and I can't wait to see what else it comes up with in the future. Smart, easy to pick up, and hard to put down, Crypt of the NecroDancer is a real winner.