The life of a fairy tale detective must be an exhausting one. For one thing, you seem to get called in at a moment's notice all over the world whenever anything strange happens. For another, you must then spend a lot of time fighting your way through fairy tales as they were originally meant to be: dark, scary, and dangerous. However, you are again up to the task in the latest adventure/hidden object hybrid from Blue Tea Games, Dark Parables: Rise of the Snow Queen. 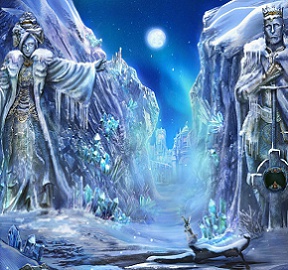 Like Dark Parables: The Curse of Briar Rose and Dark Parables: The Exiled Prince before, Dark Parables: Rise of the Snow Queen takes a classic tale, in this case Snow White, and takes it down some dark and disturbing paths. This is not the story of happily ever after, this is what actually happens afterwards, when Snow White has gone as loony as her step-mother before her and locked the mountain kingdom in perpetual winter, along with turning her hapless father into a raging beast. Snow, now known as the Snow Queen, has presided over this place for centuries now, and has decided to bury the nearby Swiss town in a raging snowstorm to cover her kidnapping of all the town's children. As the only fairytale detective in the area it is your job to brave the driving snow, solve your way into the frozen kingdom, and rescue the children with the help of a local guide and a few of the smarter kids. Can you save the world before Snow locks it into eternal ice?

Dark Parables: Rise of the Snow Queen plays like a classic point-and-click adventure with lots of FROG (fragmented object game) elements. Rather than the classic lists of junk to find in a junk pile, you are tasked with finding pieces (lots of pieces) of a particular item scattered throughout a scene in order to reassemble an object that will be useful later in the game. Along with the exploring comes a nice mix of mini-games and puzzles, some familiar, some unique. A changing cursor indicates areas of interest, sparkles highlight games and puzzles (at least in casual mode), a refilling hint timer gives helpful hints (and allows skipping some puzzles), and items go into a bottom-loading inventory. In a break from tradition there is not a classic "detective's notebook" to keep track of clues. Instead, you find fragments of stories along the way which go into a fairytale book. Collect enough fragments and you can get the whole story of what happened with Snow, her father, her hapless Prince husband, and the kingdom. Also along for the ride is a very handy map feature which allows you to see where you are going, where you have been, and places you might need to return. 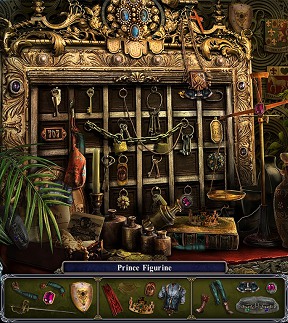 Along with finding the fragmented objects and fairytale pieces you are once again tasked to find "cursed" objects within the scenes. These objects, reminiscent of the "morphing" objects from the Mystery Case Files games, are items that shift from one form to another. Some are obvious when you enter a scene, some will only trigger later when a specific task has been completed. The cursed objects are a nice little side quest that don't affect the main story while adding an additional layer of gameplay.

Analysis: Dark Parables: Rise of the Snow Queen contains everything we've come to expect from the Dark Parables series: an intriguing story, stunning graphics, and fabulous gameplay. What makes the Dark Parables series stand out from the crowd is the attention to storytelling involved and the depth of the characters. Dark Parables: Rise of the Snow Queen examines what happens when good people do bad things for what seem like good reasons and the fallout that results, a moral lesson that today's modern fairytales seem to have jettisoned along with any scary or creepy elements in order to "protect the children".

The backgrounds are the usual gorgeous storybook confections, enhanced by some pretty amazing animations, not only in the main characters but also in the backgrounds of the adventure and the hidden object scenes. A swooping music score, amazingly life-like incidental sounds, and some fairly decent voice acting round out the adventure, immersing you completely in the experience. This attention to every aspect of the game is what we've come to expect from Blue Tea, who also created the enchanting world of Enlightenus. 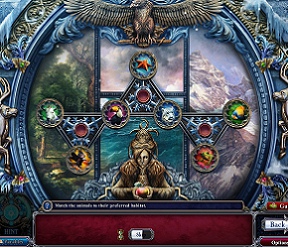 The puzzles are a nice range of difficulties and include some nice original work including a couple of multi-layered door puzzles that are once again reminiscent of the original Mystery Case Files: Ravenhearst. The other puzzles are fun variations on the familiar: sliders, mazes and the like. Puzzles and mini-games are skippable after a while except in the hard level of the game, where there is no hint feature or sparkles either. What Dark Parables: Rise of the Snow Queen contains is a fine balance of exploration, puzzle solving, and hidden object finding, each aspect in perfect harmony and not dominating the gameplay.

The third so far in the series (with a hint at the end that a fourth is in the works), Dark Parables: Rise of the Snow Queen continues the legacy of excellence the Dark Parables series established. Challenging, engrossing, and lovely, and with three levels of difficulty, you're looking at a fantastic hidden object adventure done right.

Tale of the Two Mirrors (4)

Entrance to the Snowfall Kingdom

Rise of the Snow Queen

Tale of the Two Mirrors

Congratulations! You have completed Dark Parables: Rise of the Snow Queen. If you purchased the Collector's Edition, you can now play the Hansel and Gretel Bonus Game.

Incredibly beautiful game. Worth the CE price. It's so nice to get a game made in Japan that appreciates beauty. And the manipulation of storyline is also Very well done.

Absolutely beautiful! Dark Parables is a brilliant series and I am looking forward to the fourth installment. :)

It is gorgeous, isn't it? What I liked best, though, is that they delivered both a story and gameplay to match the stunning visuals.

Tale of the Two Mirrors (4)

Entrance to the Snowfall Kingdom

Rise of the Snow Queen

Tale of the Two Mirrors

Congratulations! You have completed Dark Parables: Rise of the Snow Queen. If you purchased the Collector's Edition, you can now play the Hansel and Gretel Bonus Game.

....... You need to pay for something that is explained in simple terms below....... Anyone else think that is a strange occurrence? If BFG is ok with a complete Walkthrough being posted, why not make the whole game, or at least a collection of first levels, available to play for free? The collection idea would include all past and future games circa this one, like Jack for example.