Your editors thought it would be a simple fluff piece when they assigned you to cover the purportedly "natural" death of a reclusive genius, enough that they sent you to his remote, lonely Kansas home even though you're sporting a broken arm. They're just looking for the gossip, convinced they can spin some sort of sordid affair with the deceased and his pretty young assistant, but you're convinced there's something more going on. Problem is, you're right. And not everyone appreciates your detective work. In Robot Invader's indie hybrid action/point-and-click adventure Dead Secret, you'll explore the scene of the crime, searching through the sprawling, isolated house for clues and learning more about the research that went on there. But... you're not alone. There's a killer after you, a relentless figure in a robe and mask, and you'll have to evade them even as you search the house for its secrets. With an eerie, surreal atmosphere, tense gameplay packed with cryptic puzzles and chases, and a mystery to solve, Dead Secret is a supremely creepy and enjoyable experience, despite some rigidly scripted sequences and predictability. 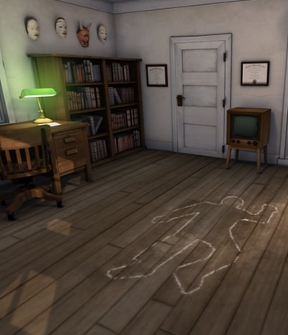 Dead Secret's gameplay is a little odd, sprinkling in sections where you'll need to react and make decisions quickly with traditional point-and-clickery. Clicking on something causes you to walk over to it or move around the area, and as you explore, you'll gather a host of items needed to progress further and solve puzzles. Some of these puzzles are straightforward, logical affairs, like figuring out the right combination for a safe, but others might need some otherworldly... perspective. Early on in the game, you'll find a mask that, when worn, allows you to see things you might not otherwise be able to. It's frequently a creepy, unsettling experience that may point you in the right direction, show you unseen clues, or just really, really freak you out... but there are worse things to be afraid of. Periodically, you'll find yourself stalked by a robed figure in a disconcerting mask, someone calling themselves WOODCUTTER who's out to make sure you don't figure out the truth behind the death of the professor, or his research. When this person shows up, you'll need to think quickly and use your surroundings to try to get a way, spotting an escape route or a place to hide. While these sequences aren't random, so you don't have to worry about the killer popping up constantly, you'll still want to be careful, since it's possible to die. Luckily, death is only one of several possible endings, and, well, since the game autosaves for you fairly generously, you can usually just retry right before the last thing you saw. 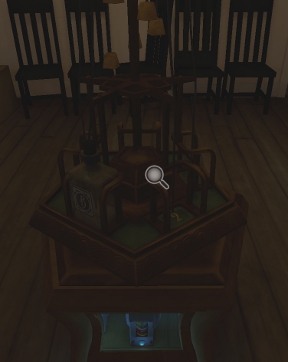 At its core, Dead Secret is essentially a mystery... whodunnit, and why? As you explore, you pick up clues that fill in the profiles of each of your potential suspects, and the story does a great job of giving each of them plausible motive in ways that will keep you guessing and revising your opinion, while also being interesting characters in their own right. What might be a little less palatable for some is the way Dead Secret overcomplicates its mystery with a lot of mystical science that doesn't really feel necessary. A lot of what you see and experience is surreal and disturbing, and might have been even more so if not for attempts to explain a lot of it away. If a little unambiguity with your horror doesn't bother you, however, Dead Secret is still a pretty intense and frightening game. While it's clear a lot of its scares were designed to make the most out of the first-person VR view, the vast majority of them are executed well enough to make you squirm, and, yes, jump a little. It's just a shame that the protagonist herself barely, if ever, reacts to anything around her, so that it feels more like you're steering a camera on a segway rather than an actual human being. Maybe this works better in some ways, allowing you to project yourself into the situation instead of getting distracted by a voice and reactions that don't mirror yours, but if that's the case, it jars against the story's attempts to flesh out her character and history through the handprint flashbacks you can find. Despite that, Dead Secret still manages to marry its story and gameplay surprisingly well, and keeps you tense throughout. While some of its characters and environmental models look a little simplistic, stellar use of light, animation, and sound make it an immersive game that will raise the hairs on the back of your neck. 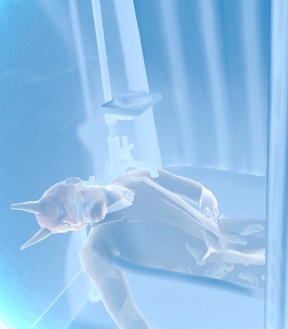 As a game, Dead Secret mostly manages to be logical and enjoyable, if possessed of an annoying tendency to often make progress hinge on finding what bit of the area you need to interact with next. The mask's ability to let you see the unseen is largely used for scares and to point out these little interactive hotspots, so it doesn't feel like it's as interesting a mechanic as it could be. When you get stuck, you wind up clicking from place to place, putting the mask on each time since it doesn't stay equipped if you move, and sweeping each view to look for glowing pulses. Fortunately, most of the puzzles tend to make an obvious sort of sense... find something hot to melt a frozen container, figure out how to read an invisible message, crack a code on a lock, you get the idea. It would have been nice if the interface had your inventory more readily acceptable, since opening and closing the menu gets tedious, though that likely would have made the experience less immersive for the VR users. As part of modern gaming's initial forays into VR as a "genre", Dead Secret makes stellar use of the first-person viewpoint when it comes to its menacing stalker, who frequently makes unerring eye contact from behind their mask as they slowly creep towards you. Even without a VR headset, you still feel present in the game, and in danger, making Dead Secret one seriously intense thriller even during its more obvious telegraphed scares or the moments when it feels like it's less than subtly herding you around. Its plot is a fairly complicated tangle of twists and double-crosses, making tracking down all the bits of notes and correspondence important to getting on the same page with the ending, but getting there is still a satisfying journey. The game's length can vary drastically depending on your play style, with one of the endings (not including death) capable of wrapping things up early on if you know where to look. For most players, however, Dead Secret is going to be a great evening's entertainment, and a great first addition to a hopefully growing VR library without making players who don't have the gear feel like they're getting the short end of the stick.

The picture links to a page for FFIX.