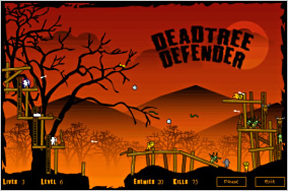 I'm assuming we all know that in 1415, King Henry V of England found himself stuck, essentially, between a rock and a hard place. I also take it for granted that we know the French army had blocked his advance to Calais, and the only other option being to retreat back to the heavily fortified town of Hesdin. It's likely common knowledge that the very outnumbered King had an estimated 80% of his army composed of archers. And it's probably unnecessary to point out that the attack from the archers pretty much obliterated the French in record time. So I'll skip all that stuff and get right to it.

In Deadtree Defender, a Flash game from Skyrocket Interactive, take control of a single archer whom, joined by two automated team-mates, are set to the seemingly impossible task of defending a withered, leafless old tree against an increasingly large opposition.

Use a combination of mouse and cursor keys for control. The mouse controls the angle of trajectory as well as the range and speed of the arrows you shoot. The longer the mouse button is pressed before release the faster and farther the arrow will travel. Use the cursor keys to move your character by walking, ducking, jumping, and climbing your way around the structure to avoid being hit by enemy projectiles.

Beginning largely ahead of your enemy on a three tiered structure, you rain down a white storm of arrows onto your slow and unprotected enemy. However as the levels advance you will find that your opponent is not as simple as you once assumed. Controlling basic knowledge of carpentry skills, rudimentary construction techniques and a certain understanding of classic timber-frame design, in short time they have what appears to be the foundations of a structure. Soon enough, they've mastered their own version of split level design and have even added an open veranda... and they don't stop there.

The game is split into three sections—easy, medium, and hard—and these 3 difficulty settings are all part of one continuous story. In easy mode the enemy will start on an open plain and begin building its defences and, at a certain point into it, you'll be declared the winner. Switching to medium mode will have them start out in the building you've just seen them construct and they build on top of that. Hard is similar but with a bigger fortification, which they still build upon even more.

You may notice the enemy's methods of attack do not change. The rock throwers throw rocks and the Medusas still throw snakes, always. However, since they will always begin in the bottom right and as their base grows you will have to re-evaluate how you aim, where you aim and how long you draw for.

Unfortunately, the replay value of this game is arguably low once completed, but you may find yourself revisiting the same scenario over again during play with a slightly more complex and expanding army to defend against. It is a wonderfully silhouetted and gorgeous game.

Oye, another defense game. This one is indeed beautiful and the way the enemy builds its structure as a means of increasing difficulty is a nice approach. The gameplay is a simplified version of the Bowmaster games that made this type of game popular, but the lack of feedback as to the power with which I was firing arrows made the game just a bit too frustrating for me.

Thanks to Redklonoa for the link!

i remember playing this game last year and i thought it was a little to repetitive, maybe being able to buy upgrades or have different weapons would improve it but at the same time it might turn it into something like every other defense game
one thing, though, that i think would make it nice would be destructive environment ie: shooting maybe a branch would cause it to fall on to an enemy or something like that, it would certainly add more strategy

quite fun, but again, the replay value isn't that high.
3rd highest score in Hard! huzzah!
Hint: Since you're at the top, your mates might not be able to shoot over the lower enemy barricades.

Hmm...
They may all LOOK like little archers and mythological creatures, but the sound effects reveal that they are all ducks in disguise!

1) The enemies remind me of Grow Cube's guys
2) The gameplay is repetitive and a bit too easy. I gave up after having all lives left after medium.

no fair they try to destroy me the most! <:(

i thought this game was boring, also i found it imposible to aim, it would be better if there was some type of power indicator for your bow

Woohoo! I made it to the top of the high score list! First try!

Too easy. I got what I think are perfect scores (was higher than highest score at each difficulty) but it wouldn't record it. All you need to do is

pick a point so that at full power your arrow hits an enemy on the top of the first ladder and remember that spot. Except for a couple times that I fooled around, no enemy made it to the second level alive. If you have to leave guys free to shoot you from ground level to make sure none of them get up the first ladder, do it. Kill them later.

To "fix" it (make the game non-routine), there should be a power meter and it should reset after a fraction of a second at max.

I got a game reviewed by JiG! Yay!

On topic, I found this game quite a tough game going right into the hardest difficulty (and not using numpf's tactic of shooting the enemies as they spawn) and although it isn't a very replayable game after beating it, I found it quite innovative.

299 on medium difficulty, good little game but getting bored now though.

I would like to know why when you submit your high score, it never shows up. i had a 95 on the easy and a 265 on hard (I believe the highest possible score) yet when I entered a name, it never showed up on the high scores list.
Any ideas?

i didnt know that your partners die

I think the link for this game is broken. Ah, I've never played this agme and really want to try it out.