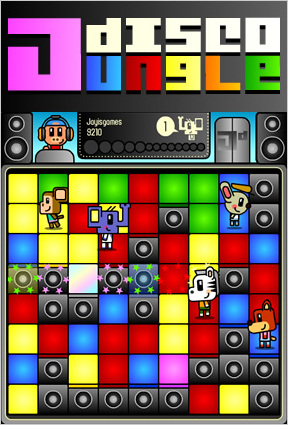 Hit the dance floor in this foot-stomping, original new take on the connect-three puzzle genre of casual gameplay, from PixelGo! of Barcelona.

In Disco Jungle, play as a funky blue elephant with a special ability to absorb the color of any dance floor tile and drop it anyplace else. Use it to connect three (3) or more same-color tiles, horizontally and/or vertically, to score points and clear levels. Go after lots of little 3-tile combos, or gather colors into one honking combo for massive pointage. Clear tiles with animals on them for bonus points.

Use the arrow keys for movement [left], [right], [up] and [down]. Press [X] to absorb the color of a tile with the elephant's trunk, swapping it with the one it was carrying. The elephant's ear will show the absorbed color you have to work with.

Connecting three or more tiles removes them from the dance floor temporarily revealing the sound system below. Avoid these holes in the floor by moving around them or jumping over by pressing [Z].

Plenty of power-ups and bonuses for combos keep this game engaging and fun. Later levels introduce security guard rhinoceros that will try to ram you into the speakers. Avoid them for best results.

Analysis: From the very first splash screen that greets you, everything about this game is fun, polished and of commercial quality. The game features a menagerie of adorable zoo animal characters all getting down (and each in its own individual style!) to a soundtrack of phat disco beats. I even found myself bopping up and down in my chair as I played. Great stuff!

PixelGo borrows an element of gameplay from as far back as Atari Video Cube. And while the gameplay is now similar to hundreds of other games, Disco Jungle changes it up and creates a unique game all its own. There's even a two-player mode that can be played either versus or cooperatively.

Truly exceptional art, sound and interface design, these gifted developers are ones to watch out for. "I like it!"

Cheers to Bass for the link to the game! =)

WOW! A game in catalan! How cool.

As for the game itself, well... it's kinda meh. gets a bit boring and repetitive for my liking. The graphics and styling were great though, if a bit kiddy.

This is a perfect example of something common done uncommonly well. I really dig this game. *rimshot*

I also got on the high scores, but with the default. I'm going back through to get on with this name, too. I like this.

Game looks Nice.
But I don't get it, confusing for me

Ro - sorry if my explanation wasn't clear. It's really quite easy.

You have to keep an eye on the color of the elephant's ear. That is the color that you have to work with, so find a spot where that color is needed to connect 3 or more.

Move the elephant so its trunk is facing where you want it, and press [X] to drop the color there.

Very calming game... love it... the music is seriously the greatest. btw... this is my VERY FIRST comment, I am so excited!!! hello Jay! hello everyone! i am coming out of my non-social shell!

Sweetie! Glad you decided to join in the fun! =)

And I'm pleased you enjoy this game, too! I fear that I did not do this game justice in my review, as it was very late (early in the morning) when I wrote it. It's highly addictive and enjoyable.

By the way, did you play with DJ Session from the game's main menu?! I've been playing it in the background while doing other things. =D

OH Thanks Jay, i forgot all about the ear

Yeah, I was groovin' to the beat on the DJ session... very cool... kinda old-school. My sis finds it annoying though... some people, lol!

Hahaha, yes, well we have great community here and the comments are well moderated (but please don't use all caps! ...a pet-peeve of mine.) =)

Oh, and the high scores for this game are all stored locally. There is no global high score list that I could see. But congrats on that just the same! =D

Kool game, but i kept doing the tiles and then being sucked up by the speakers because i did the tiles under my feet, but cool music and cute little animals :D

Man the game is ok. Like others have said i like the fact that is actually has a way to break up the monotony. But the best part is probably listening to the music. I was actually just looking for Techno muusic anyway thanks jay

very cute, and visually appealing.
but the game's not that fun =/

Long time player, first time poster.
I dunno if it was just the whole disco theme of the thing that appealed to me, or being able to blast the fuzzy animals off the dance floor with over-sized speakers, but I enjoyed that game a lot more than I do others of that genre.

Whoa. Have any of you tried "Pop flop" I think that's what it's called...on the PixelGo website? That's an amazing game! So addictive and frusterating at the same time!

yeah I tried that game... it was pretty difficult, especially since the concentric circles are all moving at different rates and you yourself are moving at a completely different rate! craziness...

I'm also shocked to find a game in catalan :DD

Anyway I'm at work, and can't listen to the music... will have to wait.

That is truly a fun little game. I was confused as to what to do first since I wasnt paying attention to the elephant's ear. But it's rather enjoyable after you've played a few games. I managed to get up to level 7 twice and I cant seem to beat that. If you look at the HS table, I managed to get an ok score. (Also Jugador 1)

i liked this game from the first time i played it..its a bit kiddy but i like that sort of thing..only one problem...how come its in french now? it wasnt before.

I've sent an email to the folks at PixelGo. It seems they have changed who hosts the game, possibly an exclusive marketing arrangement, and it is a French company that offers no English version. I will update this entry when I find out what the story is.

The English version is back!

With thanks to Jaime at PixelGo! for making this version available to us here at JIG! =)

thanks for getting the english one back!

beware the rhino's on later levels

This game is so much fun! I would love to have this game on my cell phone!! Great choice, Jay!! :D

does anyone know what song is used in this game??
xx