Mediocre's Does Not Commute, free for iOS and Android minus a single in-app purchase that unlocks checkpoints, is an unexpected delight. It's a game of traffic jams and speeding cars, as you direct the various residents to their destinations in each level. Just tap the left and right sides of the screen to steer, and watch out for obstacles, since the car will slow down if it's damaged. Though you only drive each of them one at a time, the catch is that not only are you on a timer that persists throughout the stage, the game replays your other completed driving records, forcing you to dodge and drive around, well, yourself essentially. This means that the better you drive, without crashing into things and zipping across lawns like a maniac, the easier time you'll have, though with upwards of a dozen cars winding up onscreen, all following their own routes, it still gets hectic, and you'll need to try for the bonus time tokens that pop up as well. If you really don't like the driving you're doing with the current car, you can choose to rewind and start again with it, though you'll lose a second off the timer. Run out of time, and you'll have to start all over, either from the start of the current area you're on, or the very beginning of the game if you didn't buy the premium version. You can unlock various upgrades like better traction or turbo boost as you play, but by far the biggest incentive to play is finding out what strange secrets and lives the townsfolk you're ferrying around are hiding, because there's a lot of profoundly weird and funny things happening here. 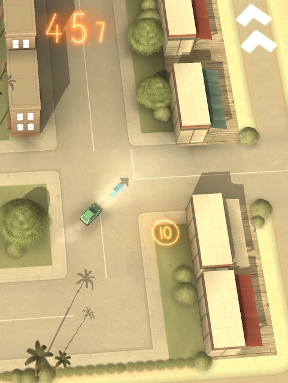 Does Not Commute is just good clean, silly fun... or at least as clean as a game that features a doctor who thinks driving around pantsless is liberating and a man desperately trying to track down an adult yorkie costume can be. Each new area adds a little bit more to each distinct character's story, and this is the driving force (no pun intended) behind winning each level because it's so wonderfully odd. What's up with the car without a driver? Who is the guy everyone just accepts is Mr. Lee? It's titillating and clever, framed nicely around the simple yet crazy gameplay. The physics can be a little unpredictable, unfortunately, so taking a corner sharply and trying to straighten out could tip your car over into a river, though you'll definitely need to get progressively more daring in order to make the time limit in each area. It's a little bit like Flight Control, only with screaming schoolchildren whose bus just narrowly missed a police cruiser that clipped a spiritualist. Though it might feel a little repetitive, and if you don't fork over the cash for the premium edition the lack of checkpoints may infuriate you, this is still the sort of casual and creative game I wish the mobile market had more of. It's easy to pick up but hard to put down, and Does Not Commute proves a little wit and mystery can make even the simplest concept feel fresh.

Android:
Get Does Not Commute

All I can do is laugh during this game. Some people actually drive like this, although they are usually drunk.

this game is hilarious.

The placement of some of the points make driving a bit "interesting".