Doors: Out of Office 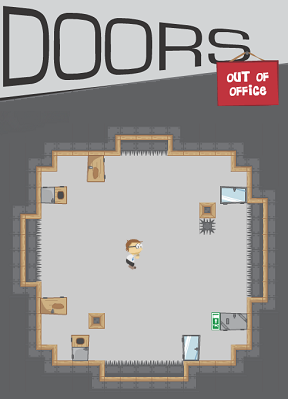 Perhaps stepping into that forbidden door of mystery science wasn't such a smart idea. In Dave's defense, though, it was 4:59 PM on a Friday, and he was in no mood to let Da Boss ruin his weekend. Still, if Dave can't figure out a way through all these doors, then he can kiss his weekend goodbye just the same! Now if only the gravity would stay straight! Doors: Out of Office is a puzzle platformer by Arctic Arcade, where every threshold crossing promises to turn reality upside-down.

In each level move and jump with the [arrow] keys. When you see a door, you can enter it with the [spacebar], and will exit from its matching pair in another part of the level. However, if that door happens to be on, say, the ceiling or the walls, gravity will shift as you come out the other side and the screen will rotate to demonstrate. Some doors will require key cards to get through. Watch out for unstable blocks that will crumble when you walk on top of them, and those deadly looking spikes. There will also be guards searching for you. While getting caught by them is game over, they will fall victim to your shifts of gravity and can be great for activating a button. Buttons in the lower will zoom the camera in and out. Entering the exit door completes the level, of which there are twenty-four in all. Though from a different genre, Doors: Out of Office is somewhat reminiscent of the classic Chip's Challenge. It has the same overall mellow vibe and humor, and puzzles based around objects following a sets defined rules and how they interact with each other. The game could probably use a better sense of perspective: zooming too far in means you won't see the whole level and the implications of all its rotations, but zooming too far out means you lose some of the quirkier scenery details (making it all a little gray) and Dave become a tad more difficult to control. Still, Doors: Out of Office is intelligent platforming that should make the work day pass that much quicker.

Play Doors: Out of Office

You see how close together the doors are? You can alter the direction the officer is falling mid-fall, so just open one door, get him falling across the screen, and then quickly open the other door to change his direction so that he lands on the switch.

screw level 24, show me the way to the next whiskey bar

The ability to pan would be helpful. At least one level so far doesn't show the whole stage when fully zoomed out.

Once you turn the room and you scale your newly formed staircase, wait until the top box [*] breaks before you jump or your head will have air holes.
after the next door, you'll have this

Break all the boxed except [%] and enter the blue door and you're home free.