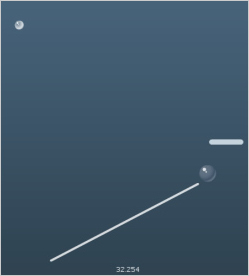 Want a very quick diversion? Try Double Jeu. It's in French. The two words you need are: jouer (means play) and rejouer (means play again). This is a very, very simple game. Your aim is to keep playing as long as possible. It may drive you round the bend.

Halfway up the screen is a Pong-style bat which moves horizontally. Use it to keep a small bouncing ball within the top of the screen. This is controlled by the mouse.

You also have a horizontal bar, which pivots around its centre, three-quarters of the way down the screen. A ball on it rolls left or right depending on which way the bar is tilted. Your aim here is to keep the ball on its bar. This is controlled by the mouse.

I found my first few tries to be fraught with failure, as I learned how to control two things at once. My first decent go (I proudly announced it in an IRC session as lasting 32.823s) ended with the ball on the pivot staying roughly in the middle, and the top ball bouncing madly almost vertically at the centre of the screen. When you first are in this situation, laugh along with me.

The one tip I can think of is to predict where the Pong bat will need to be, then keep it over the other side of the screen to that for as long as possible. This allows the pivot ball to have a chance to roll one way, then the other.

Analysis: Either half of Double Jeu would be incredibly easy to play indefinitely. Add them together and you have something which seems to be either positively reinforced (if both games want you to move the mouse right, for example) or negatively reinforced by their combination. The trick (and my tip tries to achieve this) is to try to keep the games positively reinforcing each other.

Go on. Have another go.

Cheers to Ebenclaw for suggesting the game!

I found a few flaws, though- Once the top ball is past the top platform, the game ends. He's already got one object bouncing off the bottom platform, so why not another? Admittedly, it would make the game easier, but also would encourage people to play for longer and make high scores somewhat harder to get (all about patience.)

One strategy I found- keep the ball in the middle. If you jerk the mouse over fast enough to where the top ball will hit, the one you're balancing barely moves. This brings me to my second suggestion: Have it so that the paddles are eased to the new mouse position. First of all, it would require more planning to actually get to the spot where you're supposed to hit. Also, it would mean that the one you're balancing wouldn't bounce as much. Just an idea, though... I think it would help.

Sorry about that- it said the servers weren't responding.

No worries, I'll clean it up. I had to reboot the server due to the tag function bringing it to its knees. I'm working on getting the tag search function working better, and I have had to take them offline for a bit.

Sorry for the inconvenience.

Goodness. 34.985 is the best I could do. It started going so fast that it made me a little dizzy. Very fun though.

This is like trying to pat your head and rub your stomach at the same time. With one hand.

it's too addictive, and if you click the little British flaf in the bottom left you get (to play in English). I don't particularly like getting called almost as smart as a poodle in a language I don't (understand)

I got the same score as Paris Hilton! Yay!

What a hateful little game. I love it. I agree with Wylie; very fast mouse movements are the way to go. I couldn't get above 19 seconds, though, before I decided I should be working on my essay instead....

Oh it is quite fun :D My best so far is 30.335
The site also has some other fun games. I like the spinning maze (318 secs I think on that). The fuzzy mazes makes you paranoid and crazy. Oh and the Invisible Mouse game is fun :D (6min 46 secs here!)
Neat little simple games...that mess with you :P

It's really easy if you keep the ball in the middle and concentrate on the top one, i managed to get 1 min,29.421 secs

I suggested this game and I'm glad you chose to review it! I thought it was pretty addictive and like wylie suggested, quick mouse flicks work best.

Glad you like it guys. I wondered about the top ball being able to descend the full height of the screen, but I don't know whether it would be any better, just different.

Sorry ebenclaw, I didn't see your suggestion, I was randomly pointed at the game in an IRC channel. If I can work out how, I'll edit it to credit your suggestion :)

Hi, i'm the guy who made this game
i found your link with my referrers, you brought a lot of people recently :)

it's the first time i see a very long comment about my game, how to play it, tips, an analysis etc.. it's very funny !

but i'm very glad you like it, this game seems to have travelled a lot around the world recently, i'm very surprised.
my best score is 37 sec :)

It'd be nice if this game kept the mouse visible. I keep moving my mouse under or over the box.

although annoying, its good fun, i may just have to come back later today to play this..

woooot 36.964 haha...hmm its a PRETTY good time i guess....but i think i should get more JAY THIS GAME IS TOO ADDICTING you should put a health warning up on your games or something, "may cause carpel tunnel"

Dude, this game makes me feel more stupid than I actually am :/

OK all this quick movements thing kinda works for a while but if you want to ball to stay in the middel then move it back n forth softy and then only aim for the top ball as it gets close i found this passes the time more quickly and is less frustraiting then the quick sharp movments NOW what relly makes me angry is when you achive better then the average best score it still says great ....but maby your not consintraiting or maby your just stupid OMG it makes me want to smash somthing

Hey Atom, I was wondering same thing about the game where stickman has some sort of ladder to climb so I ran the text on first screen through translater and it turns out you have to use scrollwheel on your mouse. When the arrows point up, scroll the wheel "up" and when arrows point down scroll it other way.

Ah, I was wondering about that game too- I thought so, but it didn't work on my Mac. (Yes, flash player 9, though using Safari.)

I found that motzo's suggestion worked pretty well too, but they're both useful.

My strategy is to try to keep both balls on the same side of the screen -- if they are on opposite sides and you have to catch the upper ball with the paddle, the lower one will tip right off the bar.

I broke 60 seconds.
Unfortunately, I was playing the french version, so I couldn't read what it said...

A nice diversion, but not something I'd play regularly.

I noticed something about the french words - after I lost (about 11 seconds), it said: C'est exactement le temps qu'a fait Paris Hilton, bravo !

Let me look up the french for a second...(goes to translating website). Look if you want!

Okay, here we go... "It is exactly the time which Paris Hilton made, cheer!" Gasp! Another one: Je sais pas pourquoi, mais sens que t'es pas aussi nul que et que t'as envie de recommencer... = "I do not know why, but direction which are not as null for you as [something here but had some french letter...]and as you have desire for starting again..." Is it saying i'm so dumb that I should have no desire for trying again! I'm insulted! Heres the last one that i'll be willing to translate: Eheh ! pas mal ! Mais tu te deconcentres trop vite j'ai l'impression, ou alors t'es simplement naze ! This means: "Eheh! not badly! But you deconcentres [lose concentration?] too quickly I have myself the impression, or then be to you simply naze[stupid?]!"

Despite the... odd comments (cry), I must admit this was a wonderfull game. It started out hard, I quickly adjusted. You have to adjust you mind to watch both the tilty thing and the ball, and adjust to both. Sometimes this will mean tilting the ball towards the place the bouncing ball will come, so you can tilt the rolling ball back, at the same time you bounce the ball. Wonderfull game!

Haha Ainegue you dimwit... didn't realize there were engish translations... hahaaha... Still, if you translate it directly from french, it much funnier... giggles...