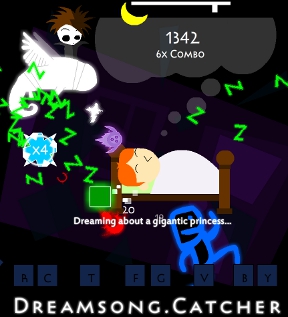 The next time you wake up confused and baffled because you just dreamed about getting married to an apple aboard a ship made of pants, you now have someone new to blame. Dreamsong Catcher, an arcade game created by Nerdook, is about the Apprentice, who wants nothing more than to be a fully fledged Dreamsong Catcher. To do so, he needs to prove his worth by collecting seven Dream Creatures, a feat achieved by visiting sleeping dreamers and collecting the imagination notes that appear around them as they sleep. Control is simple; just click on the lit keys (or type the letter if you're quick enough) to send a blast flying that collects green notes, trying to avoid any wrong keys or red notes. You need to reach a target score by morning or you'll fail and have to try again. The more you play, the trickier the game becomes, with more demanding score requirements, keys that change more swiftly, and purple horrors that swoop around trying to steal power from you, and even "bouncers" that redirect your missiles. And don't think your work is done when you've made all the beasties you need...

While the first batch of levels isn't particularly challenging, even if they are a little chaotic, the Worlds of Nightmares might present a harder fight. Literally, since instead of creating creatures your goal becomes gathering power-ups to try to bash a nightmare's health down to zero before he can do the same to you. In an interesting twist, the higher a score you get in the corresponding Dream World level, the higher your health will be in the corresponding Nightmare World level, making it worth your while to go back and get a high score. (That's right, Point Junkies... your time is now.) 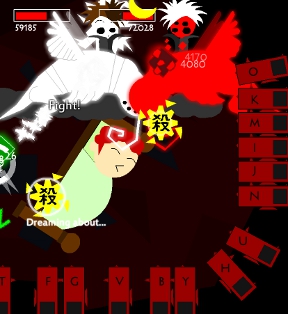 Analysis: Dreamsong Catcher is one of those games that makes you go "huh", but in a good way. Combining procedurally generated music with surreal visuals and a cute concept, Nerdook delivers a strange but appealing experience. The music changes as you play, and so do your surroundings, serving up a randomised smorgasboard of dreamlike strangeness. The descriptions of the dreams themselves seem a bit odd, but admittedly I'm probably not qualified to speak on that since I once woke up angry at my husband because I dreamt he took us on a vacation to a moldy slum house because "the acoustics are perfect to practice pig calling". (Don't pity him; he knew how crazy I was when he married me.)

The gameplay itself is simple and easy to grasp, but a bit chaotic, and often winds up giving the impression that how well you do is a bit more down to luck than anything else. Later levels lose some of the dreamlike appeal of the first batch, since the "fights" are less about carefully picking your attack and more about hammering on the keys to grab an attack before your opponent can. Still, it's a creative concept with more to it than you might expect from the first level, and one I was happy to play. (If only to give the weirdness that my brain gets up to on a nightly basis a bit of context.) Give it a try even if you don't particularly relish the idea of a Tim Burton reject with black eyes hovering over you and siphoning off your dreams while you sleep.

Quite the replay value! Right after you think you beat the gaem another surprise! The freeplay section provide level ups and achieve trophy =D
The best are the funky random dreams that kids dream XD
The best dreams I had is

"Dreaming about a giganntic milkman chasing a knight on tuesday"

"Dreaming about an invisible milkman telling a poem to a watermelon high in the sky !"

One time I got "dreaming about a cackling werewolf hiding from a tower in the basement". These dreams would make great story prompts for writers.

My favorite was dreaming of an undead orange gently stroking a beautiful princess on the lawn.

How do you use combos to defeat the final level? I can't work it out.

As far I can tell, you use the white missile to collect Imagination Zs and once you've done it a couple of times, you can click the combo cannon to deliver a good amount of damage to your foe. Repeat until victorious.