What is best in life? Some might say it's to crush your enemies, see them driven before you and hear the lamentation of their women. I see it differently; my vote is for leveling up. That moment when your XP bar rolls over and you hear that joyous ding just makes my heart flutter. If you feel the same way, it's time to meet Dungeon King (Demo), an action-RPG from Bulletproof Arcade filled with monsters to smash, gold to loot and experience bars to fill. While the full version costs money, it costs you nothing to check out this free flash demo and rampage a while 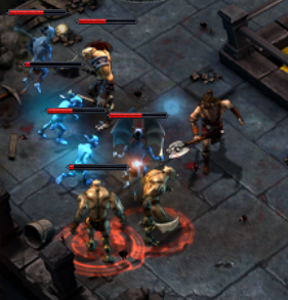 Control your barbarian hero with the [WASD] keys, then move the mouse to aim and click to slash. (Hold down the mouse button to attack continuously.) You'll learn new skill attacks as you level up; press the [spacebar] to use these and [shift] to switch between them. Monster genocide earns you experience points and at each level you get five skill points to boost stats like damage, critical rate and armor. Maxing out each stat earns a unique and powerful perk ability. Enemies, scenery and chests also spew gold all over the place which you can spend on gear to further boost your stats. Press [tab] to open the game menu where you can manage your stats and visit the store, which is automatically updated with new gear every floor or so.

There's no cinematic plot here aside from a short introductory cutscene; it's just you, a dungeon, and an army of bad guys who need a good axing. The closest thing to a puzzle involves putting a key in a door after stomping all the monsters guarding said key into goo. It's a good thing, then, that Dungeon King has a good grasp of the fundamentals, and combat is fun and responsive. Based on your stat choices you'll find the most success by either wading into the hordes head on or dancing around the outside of groups hacking away at stragglers. Later monsters have more varied attacks that you'll need to contend with such as ranged blasts or radial shockwave attacks. Randomly dropped health potions are always used on the spot; if you're already full the health is converted straight to experience. Since the only ways to heal in the game are through these potions, levelling up and death it pays to be cautious. The death penalty of a small percentage of your gold is so minor, however, that it seems like this was a conscious decision made to keep the game simple for casual players.

Analysis: Fans of Diablo and Torchlight will enjoy Dungeon King, but it's worth noting that this game deviates from the norm in a few key ways. For instance, there's no way to heal on command. Likewise, there's also no inventory management beyond purchasing new gear and selling old gear; enemies drop only gold and potions and older gear tends to be useless, not to mention there's only one type of weapon, so generally you'll buy new items when you can afford them and just sell off all of your older items. This also means that generally it's better to focus your stat points on damage-based stats rather than resilience; the faster enemies die, the less likely they are to chip away at your limited health. 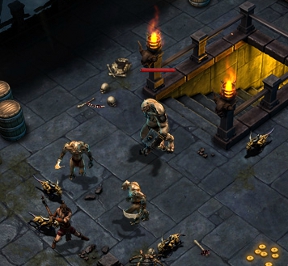 There's also a bit less character customization than other similar action RPGs. You can customize your character's stats and gear to your heart's content but there's only three attack skills available and you always get them all in the same order. You can upgrade your attack skills if you'd like but it's equally effective to ignore them and focus on stats. It's really a matter of personal preference. It's also not possible to customize your character's appearance. All in all this makes Dungeon King an experience that's perfect for casual players or players who aren't looking for endless depth. This isn't necessarily a bad thing; if you're in the mood for a straight up hacking and slashing rampage, this is your game.

Something also needs to be said for Dungeon King's presentation. Dungeon King's graphics are very impressive and the game would look right at home on the PSP or Xbox Live Arcade. It looks great and it's actually a little surprising that this runs entirely in Flash instead of Unity, an engine more well-known for visually intense games. The game looks absolutely beautiful, even if the character models are tiny, and the detail to the environments is top notch. It's the sort of presentation you always hope to see in a browser game, but rarely do.

Dungeon King is available as a demo that allows you to explore the first three dungeon levels. Since you won't have much time to level up, you'll probably only see the first of the three skills and you won't get a chance to play with any of the perk abilities. The full version costs $9.99 (still playable in your browser) and expands the dungeon to 12 levels, which will allow you to further develop your character and also includes a variety of new monsters, traps and items. Since the game has some dynamic generation in the background as well, it's possible to play through it repeatedly and experience something new each time. The demo is a must-see for RPG fans; given the dynamic content generation and quality of the game overall it's also easy to recommend the full version. While it lacks the depth of mechanics that other similar games may have, Dungeon King is still an extremely polished and addictive hack-and-slash fantasy experience that casual fans looking to have some time filled (or devoured) will welcome with open arms.

Rewards are the whole point of the grind. With such thin pickings, this game is more of a chore. Interesting concept, and agreed that the graphics are nice and it plays well in Flash. But I'll save my money for the Torchlight 2 release.