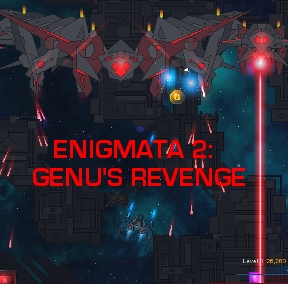 In the future, all issues will be resolved by massive space battles. Yes, that's right. Even store returns and canceling gym memberships. And because I'm totally not lying for my own amusement, you should play Enigmata 2: Genu's Revenge to prepare yourself for the shooter revolution. (FYI, the future also involves leaving funnel cake in tribute to your favourite gaming websites. Just sayin'.)

There are two control schemes for you to choose from, although I found using [WASD] to move and the mouse to aim and fire was the easiest. I also highly recommend going into the options from the main menu and setting the brightness to "high" because anything else is like playing inside a mineshaft without a lantern while blindfolded. (Exaggerate? Moi?) I also, also recommend taking advantage of the tutorial your good friend Neko offers. Fly through the levels avoiding enemy fire, collecting upgrades (and avoiding downgrades), completing side missions, and take down the bosses to advance. Between missions you can save your game and you'll have access to a store you can use to buy upgrades, new abilities, or even new ships, with more unlocking as you progress.

Who is the mysterious Genu and why does revenge come into play? Chances are you probably won't care. The game's biggest strong point is clearly not its storytelling, which is prybar'd in awkwardly and winds up sounding a lot like the plot of most Anime series from the 1980s. (All that's really missing is someone called something like Shining Hero Kaeda 1.) No, space fans, no great galaxy opera for you this time. If Enimgata 2 sings a siren song for you, it's going to be because of the tremendous glut of laser fire, explosions, upgrades, and ships on offer. Shakespeare? No. Bosses ten times bigger than you are vomiting an obscene amount of fire all over the screen? Oh, yes.

Enigmata 2: Genu's Revenge isn't perfect, with controls that are perhaps overly responsive at time, but it's an enormous improvement over the original. Shooters hold a special spot in my heart (it's the same spot that hates navigating push button menus on the phone), and this one warms the proverbial cockles nicely. At least... I think it did. What's a cockle, anyway? Does the answer lie within Enigmata 2?!... probably not, but you should play it anyway.

A cockle is a ten pound note (GBP). If it warms, it's because it's burning a hole in your sky rocket (pocket).

So it means you're looking forward to spending it hence that good feeling of a great night out approaching :)

What do I say...? I love it! Expecially the music, the upgrades, the achievements, mini-missions, sidegrades, gosh!

I hereby suggest a Dora Fanclub or something or other! I never really used to read any of the reviews on JIG - heck I never even used to READ. But Dora is consistently funny and her grinning speccy face is adorable - because of her I can now read AND type! Yay!