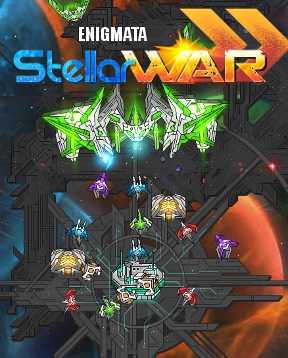 Roshan Gamage's popular shooter gets an extreme makeover in Enigmata: Stellar War, a flashy new tower defense action game with more enemies, bigger bosses, more skills and explosions, and more lasers than you can shake an Illudium PU-36 Explosive Space Modulator at. The story?... uh... something about... a guy... who's angry... and some dudes... with... hair? Maybe it's a war for hair product? Look, that's not important. What matters is that this is your chance to single-handedly destroy an enemy interstellar army!... well... single-handedly apart from all the many, many, many ships you'll deploy that will be destroyed in the process. They might help too. A bit.

Your goal is to protect the Core from a continuous onslaught of enemy fighters and eventually bosses by building ships of your own with varying types of fire and abilities. Just click on a ship's icon in the sidebar, and then anywhere onscreen within the Core's radius to place it. Building ships is free, limited only by your unit cap, and by spending the gold you acquire from defeated baddies you can unlock even more varieties with bigger bangs for your bucks. Additionally, if you click on a deployed ship, you'll get access to a bunch of upgrades you can purchase for it to make it even better. Ships will attack anything that comes within range automatically, and you can freely drag the ones you've placed around the map to better deal with threats as they appear. If things are moving too slowly for you, click the little arrow icon beneath the lock button on your sidebar and then find some Benny Hill music on Spotify to play in the background.

If you want to get a little hands-on, click anywhere on the map to open a menu that will allow you to deploy some fancy special attacks with cool-down times that can seriously turn the odds in your favour... especially if you spend the cash to buy new ones or upgrade! Perform well, and you'll be able to get special upgrade options between levels, though sadly the option to "play Ride of the Valkyries while you recline in an enormous leather armchair and watch the carnage" doesn't yet seem to exist. The upgrades you purchase and the ships you deploy persist between levels, so don't be afraid to put a little strategy into your spending.

Considering the shooty arcade roots of the series, Stellar War's defensive gameplay comes as a bit of a surprise. For the most part, it's a good one. Though shooter fans are going to be doing a little lower-lip-quiver over this, tower defense fans will be thrilled to welcome another title into the fold, especially one as shiny and slick looking as this. The design is simply beautiful, with detailed little ships zipping around and lasers in particular having some gorgeous visual effects. On the downside, gameplay can sometimes leave you fumbling, with clicking through numerous different ships to apply upgrades one at a time getting tedious in later levels. Fans of more orderly defense titles might also find this one a bit too chaotic with so much going on in so many different directions. With a gorgeous visual style and an easy to master control scheme, Enigmata: Stellar War is still a clever spin on the tower-defense genre that's well worth losing a few explosions to.

Fun little game. I like the variety of units gradually unlocked (though I perceived them as turrets rather than ships). I most definitely like the persistent fleet/positions between levels. The Achievements are somewhat intimidating, with only one achievable before having completed 10 levels; I think I'd prefer it if most of the first page could be done on the first six levels or so, with the tougher / more completionist achievements on the second and third pages.

I like the way the unit cap forces you to consider your unit composition. I really like the rare units, although I haven't yet found out whether Infinite Fortress actually does anything ^^;;

One BIG downside: when a unit is close to death, there's absolutely no indication until it blows up! And in fact, it's easy to miss the explosion, because the "Rank Up" animation looks just like a big explosion so it's easy to tune out -.-;; It would be much better if there was an option to show unit health bars all the time, or perhaps show health bars for all units more than 50% damaged or something like that.