The life of a mayfly is a short one, but that doesn't mean it's uneventful. As far as the titular character in SuperChop Games' musical adventure Ephemerid: A Musical Adventure is concerned, there is far more to life than fleeting about along the waterways and musing about the various shades of green one encounters. There is a whole world to explore, friends to meet, enemies to thwart and love to share—all with an accompanying soundtrack to match the epic proportions of a life lived to the fullest. For you, the player, Ephemerid is a uniquely interactive iOS game of paper craft landscapes, rock'n'roll lights shows and thrilling escapades. Ephemerid wordlessly invites you to experiment with the environment, one that is hand-crafted from paper, glass and paint. In this way the game feels remarkably tactile as you tap and swipe the screen to make things happen from the beginning of a mayfly's life to the...end? In each stage, you're tasked with discovering just what to do to move the mayfly forward, removing obstacles or bouncing off flowers or defeating a foe. Usually this involves tapping at the right moment similar to a one button runner. Other times, launch physics are called on. Yet, however the action takes place, the emphasis remains solidly on the story and the musical harmony that drives it forward. 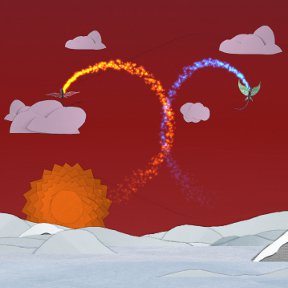 As interactive, tactile and engaging the Ephemerid gameplay is, it is quite possible to take a passive role in the experience. While good timing and dexterity might render livelier and more satisfying results in certain sequences, there is no way to actually fail in this game. If you're content to do the minimum number of taps to advance to the next stage while kicking back to watch the visuals and listen to the skillful guitar melodies, that's entirely possible. No matter how active or inactive, most players will complete the twelve chapters in under an hour; fortunately, the game is gorgeous enough and entertaining enough to hold immense replay value. In describing their creation, Ephemerid designers Matt Meyer and Brent Calhoun say it "began as a series of experiments on how to design a game with no language or UI" and so they sought "new ways to communicate with the player." And the results are remarkably successful: intuition and trial-and-error is all it takes to succeed at and enjoy this game.

While it is truly a game unlike any other, ergo direct comparisons can't easily be made, with myself as evidence Ephemerid will delight anyone who enjoyed Beat Sneak Bandit because of its music-centric gameplay as well as those who loved Windosill or Monument Valley for their interesting designs and unique artwork. The downside to Ephemerid's universal accessibility is its lack of achievements or significant challenge, which could potentially disappoint players wanting a bit more heft to their gaming. It teeters more on the side of being art you can interact with/be entertained by than game to test skill or wits. But that is one of the best qualities of Ephemerid: A Musical Adventure—at its heart is an uplifting and beautiful experience, something you'd want to always keep handy on your mobile device to open up anytime you need reminding: that life is an inspiring song and a lovely dance, and an adventure to be enjoyed to the fullest.