Last month, the amusement park NAGOYALAND opened its doors in Japan, taking its name from the Nagoya cultures it reproduces. Whether or not the evil warlocks that dwell in a secret base in the park are part of that recreation is unclear. As Fairie Princess Satomi— because we all know that Japanese fairy princesses double as secret agents— it's your mission to sneak in, locate their secret base, and then, well, Escape from NAGOYALAND. (Ah, the obligatory title drop... ahem... where was I?) Perhaps this retro point-and-click puzzle adventure by Arata Takeya has a slightly absurd premise, but that's probably to be expected from a Japanese developer. 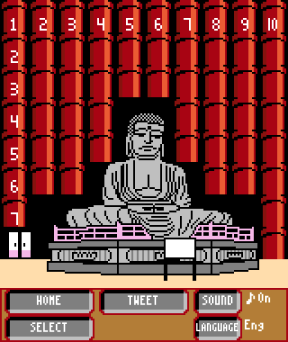 The player's adventure through NAGOYALAND will be something of a mixed bag. Some of the levels are classic puzzles like cover-every-road-exactly-once or memorize-and-repeat, while others are standard point-and-click affairs. Most of the time, you tap items to interact with them, hopefully figuring out at some point how to open the door and proceed to the next area. It's not always just tapping, though; sometimes you'll need to swipe, sometimes tilt your device, and sometimes even wait a minute or two.

As easy as the game is, it's possible to blaze through the game's 11 levels in under half an hour if you know what you're doing, but what it lacks in difficulty, it makes up for in charm. The pixelated scenery is breathtaking for its simplistic style, recreating the Nagoya sights meticulously. The audio may be free resources from Skipmore, but it certainly helps to set the atmosphere. Plus, the game is free, the ads aren't intrusive, and in-app purchases are nonexistent, three things which are always a plus. Take a vacation to NAGOYALAND today!

Is there a thing to let us play smartphone games on computers?

Not legitimately to my knowledge, unfortunately, at least not for iOS. There's a program for Android games that allows you to do so by plugging into your Google account so you can still purchase and play games straight from the devs and the Google Play store, but I haven't seen anything similar for iOS.