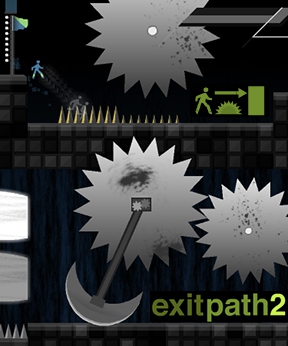 Ever seen a summer action blockbuster? You know how there's usually that scene where the heroes are running down some kind of dangerous industrial corridor and there's this huge swinging blade for no reason at all and the blade's all like "Bwo-bwo-bwo-bwo" and the heroes are leaving behind trails of light and running with the soundtrack all "watchachachacha" and they're diving and jumping all over the place in their sunglasses without a hair getting out of place and you're in your seat going "Whooooooooaaaaa" through a mouthful of popcorn? Actually more like "Whomphpoaoaahamphph" due to the popcorn factor. And generally these films were sequels, right? Well now you can live that cinematic experience for yourself with less possibility of choking to death in Exit Path 2 by jmtb02, the sequel to the run and jump smash hit from last year. Uniplayer and multiplayer return with a vengeance, plus some extra challenges and bonuses available to players who donate to the game in a pay what you like schema.

The controls are the same as the last go around: [arrow] keys or [WASD] to move around, and once you get enough running behind you, a "flow" bar fills up allowing you to make like the Six Million Dollar Man by hitting [spacebar] or [shift]. [Q] toggles quality, and you can control other things like sound through the pause menu via [P]. "Uniplayer" mode is what other games would call single player or campaign, and it's pretty long, enough to interest a player who doesn't care about multiplayer. Multiplayer mode pits five runners from across the internets in a knock down, no holds bar match to see who can run the fastest while wearing a silly hat and carrying a pair of scissors. See, this is where "flair" comes in, little customizables that you unlock through the game, as well as some you get for buying an "exitPASS".

Like all of jmtb02's games, this one has a ton of unlockables and achievements, generally for collecting signs and "flitters" (they look like little fireflies) as well as more humdrum stuff like leveling up or completing areas. 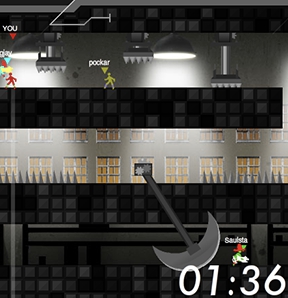 Analysis: Those of you who break out in hives at the thought of microtransactions might be reaching for your antihistamine right now, but you needn't bother. The game implements them in a very lowkey fashion; donate any amount, even a penny, to get in, and for this you are rewarded with 40 pieces of exitPASS-only flair, and ten bonus challenge levels. You don't gain any advantage in multiplayer, so don't get concerned about being at a disadvantage if you can't or don't want to donate.

The bonus challenges are ten short levels that are, frankly, for the hardest of the core, or the corest of the hard, or in any case someone more talented than me. You have thirty seconds to complete a level. The timer restarts when you die before a checkpoint, and rewinds back to the time you hit the checkpoint if you die after a checkpoint, but if you run out of time after a checkpoint, you're sent back to the beginning. If you're too cool to take 30 seconds, there's a further challenge of trying to ace a level in 20 seconds. There's a certain amount of luck or patience involved here as well, because the whirling blades etc keep rotating or moving at all times, and there's usually one exact safe sequence that you have to start from at the beginning. Psst: you can game the system by hitting pause and waiting to unpause at the right point in the sequence.

The game, particularly the multiplayer, can be a little processor-intensive, so those of you on older machines may want to hedge your bets by playing with no other tabs open, leaving off flair, and lowering the quality. The game as a whole is remarkably forgiving to a wide range of skill levels without being too easy for the more hardcore player. Frequent checkpoints, for example, ease the frustration of a player like myself, while timed runs challenge the elite. Even the multiplayer acts on this basis, automatching players based on skills so that races feel competitive. In another sign of its summer blockbuster of Flash-dom status, this game will appeal to a wide variety of people and pack them in the seats. And hey, there's no reason you can't celebrate a win with a little popcorn.

saved fine for me. But the frequent rewind crashes Ill 2nd. Also slowed down to an unplayable crawl on my machine past level 8.

You can change the quality in the pause menu, if that helps.

the game has so many bugs and is kinda slow meaning the character very slowly and not fast like the first one. is that my problem does the game has some problem. help
really when i say bugs i mean there are too many bugs to count. someone fix them
i cant make a list

Frankly I am disappointed with this game. I expected a lot but the game fails to deliver the expectations. First the game has so many bugs and i am just wow. the bugs make it more worse. the game is very slow and the character moves so slowly and the music is not that good instead it does not fit the game at all. overall i didn't like this game. it could have been a lot better.
thanks

Really slow. Used so much cpu that my laptop overheated.

I have to agree with the complaints about speed and lagging. I found once I got to later levels there was quite a bit of lag which made it very difficult to progress. There were also a number of bugs. Altogether I would not say this game is as polished as it should be for release.

I'm just dissapointed overall though. I feel bad for the other people who cant play "properly" AND the game overall is a lot less fun and/or thrilling to play than the original.

I totally agree Solatoral. I mean what happen to this game. an amazing game has such a bad sequel and the levels are kinda the same from the first game and you just don't have any fun playing the game. Wow I was really looking forward to this game. And To Joye. No disrepect but I don't know why is she so happy about this game and also what i notice in the review is there is no negative points about this game, when i can see plently of faults with this game. Plus there is no wow factor in this game. The only wow factor I can see is Wow this game is really bad. Overall this game is not upto to it's standards and is really disappointing.

well i had a fun time with this game! no lags, no bugs, no speed issues, the character moved right along in every way i wanted... sure, i died quite a few times...
the only thing i noticed was that the higher in the levels i got, the slower the load time... but i really enjoyed this game :)

Decent Game but quite easy and short. One complaint is that in the laser part of the central hq section it is tricky to see yourself

I have to agree that it was a little boring, especially since the first one was such a great game. I didn't experience any bugs, but the levels were a little boring. I only had a few spots that stumped me for more than one death, which is highly unusual.

Maybe already mentioned, this game is quite similar to that game on Kongregate- the multiplayer running game.

Armorgames doesn't work on my CPU- can u play elsewhere? :¬?

Quite a good game but it was the same as the first except for the swinging axes thingies goin around in circles..plus it doesnt save so i had to complete the game in one sitting

Any help on Lvl 18 would be appreciated...I can *almost* get there, but not quite.

Thanks, John -- better graphics, better quality of sound (although I liked the very bare sound of the first one better) -- another summer spent trying to collect all the flair!

So, after jumping on the couch, fist-pumping, and shouting YEEESSS...a slightly more tempered response....

Great gameplay, and the graphics and sound is definitely more tricked-out, although I really liked the stripped-down look and sound of the 1st one a little more.

A little simpler, I think, as I finished the game in one sitting, with most of the hidden signs collected -- but that's not necessarily a liability.

Biggest buzzkill is that the save feature doesn't. Means I can only play if I have the time to sit down and play it all the way through -- and I rarely have that luxury. Means that I won't be repeat-playing until I collect all the flair.

Hopefully Jay will allow an update if and as you get the save function sorted.

I am having the save problem too. Every time I save the game and close the tab, the game data is lost. It's a good game, but not as amazing as the first because I can never finish it. Please fix this problem, John!

[Right-click on the game and choose "Settings", then make sure you have allowed Flash to store enough data for the domain it's being hosted on. If Flash doesn't have enough storage, then games can't be saved. -Jay]