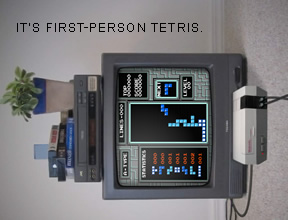 Ah, Tetris, that most classic of casual games. Who hasn't heard of Tetris? Some of you, dear readers, probably played the game in the womb, it is that well known. Created in 1984 as a communist plot to tie up all the workers in the West, thus to cause the entire capitalist system to collapse... what do you mean, that's not what it was invented for? Tell that to the millions of addicted office workers and billions of lost productivity hours. At any rate, First Person Tetris, an interesting new action puzzle game, takes the old classic and puts a brand new spin on it. Literally.

If you are familiar with the classic (and most everyone should be), the game is simple. Use the [arrow] keys to move pieces, the [space] bar to rotate pieces, the [enter] key to drop pieces, and the [esc] key to pause or change the settings. You can also set the music to one of three classic chip tunes, or turn it off completely. The real fun begins when you hit the play button.

Once play begins you are confronted with a sight that would be familiar to any of the older readers out there, a classic Nintendo console attached to a vintage television set, with video tapes (ask your grandparents about Beta vs. VHS, kiddo) and a lovely potted plant. This could be any suburban home circa 1987. The game on the screen is classic Tetris, and the first piece is falling. All you have to do is push the space bar to rotate the piece so that there are no spaces on the board, fitting the falling pieces together like a jigsaw. Do that, however, and you have fallen down the rabbit hole! Because when you hit the space bar you are not rotating the piece, but rather the entire background, creating a dizzying new variation that almost makes the game feel new again.

Of course, the dynamic is the same as basic Tetris; fill in the bottom of the area (for a given definition of "bottom") without leaving any spaces if possible. Once a row has filled in completely it will vanish, which is good as the pieces of varying shapes keep coming and coming, faster and faster. Keep playing until the space fills up and you die, or until the perspective skewing nausea sets in, causing you to fall drunkenly from your chair (or couch, or wherever you are sitting). Fun!

This is what casual gameplay is all about, something that can occupy you for minutes (or hours), rediscovering an old chestnut and seeing it with fresh new eyes. Be warned, though, if you can survive the motion-induced nausea you may find out what all those office workers of old discovered, once started it's difficult to stop. Have fun!

I wonder how long it will be before the Tetris Company sends a cease and desist to the author of this game?

I estimate about a week, give or take a few days.

Fun, definitely harder than the regular ol' Tetris. Though the tricky bit (aside from the nausea) is that you can't turn your piece and move it at the same time (unless you have achieved that degree of mastery already, in which case I am jealous). So moving your peice down might now make it move right, and to figure this out quickly while trying to remember which way your peice turned and why you turned it in the first place, and to fit in the spot that is not in the same spot that it was in the original... spot, and then it gets faster and faster and you don't have enough time to turn your peice and then you're panicing and dizzy and about to have an seizier even though you're not epilectic and thinking, "How do you spell epilectic and is that the correct usage?" and there's no time, no room, where do I put this peice?... So much more entertaining than regular Tetris, anyhow.

And hey, night mode, anyone?

Hopefully, Tetris' lawyers don't kill him too much, and they'll just let him change the name a bit. Even better, perhaps they'll license it!

i can't play it. all the turning makes me sick to my stomach and i haven't even eaten breakfast yet. good concept. i just can't handle it.

For the record, Betamax was better than VHS. If anything, Beta lost to VHS because of bad marketing.

This is an ingenious adaptation of the original. That said I couldn't play it for more than a few minutes as it made my brain hurt.

This was amazing, but I couldn't handle it for more than five minutes.

Great concept but clearly made for those with a stronger stomach than I.

I've played a lot of tetris variants, and I don't like this one :( the title sounded good but I find it annoying to play. wouldn't say it's really 'first person' either, you'd have to see it from the block's perspective for that, which wouldn't work.

Not all that fun. Annoying and aggravating.

It plays like Tetris but feels like a theme park ride. I would love it so much if I could also "barrel roll" my pieces to the left.

Excellent fun! Night mode is the only way to go.

Despite what Tetris Holding LLC claims, the rules of the tetromino game have no copyright. For proof, search YouTube for "This Fan Game Video Will Be Flagged." Take it seriously or not, just throwing that out there.

The music may be another story, but most tunes (particularly classical orchestra or piano) become public domain after enough years, right?

[Edit: Plain and simple, Tetris Holding LLC has the word "Tetris" trademarked. There's no getting around that apart from naming your game something else like, First-Person Tetronimos, or something, but then it wouldn't have the same impact, would it? -Jay]

Heh, I had forgotten what it feels like to suck at Tetris. Now I remember. XP

Managed to reach level 06 on my last game, but graaah I need to stop this and get back to schoolwork. Usually when people say a game is addictive, I don't really see why. But this... just wow. I think I need to go take a walk.

night mode is insane, Tetris is a gReAt GaMe

Do NOT play night mode until you played regular first .

I wonder if it works in real life too. Tehe. I cant imagion someone turning upside down just for tetris. I think its hard to learn the keys the first itme. I kept mixing up ENTER and SPACE.

I've played the game 6 or 8 times now and I've had fewer straight pieces than that.

Wow, that's impressive. I'm relatively good at normal Tetris, but this was humbling (and nauseating) and fun.

And then I tried night mode. !

And I'm still too chicken to try Night Mode.

LOL, bro 90 lines? nice...
I got 53 lines in night mode. It's not all that hard, you just have to ALWAYS know where your edges are. It is fun though, you guys are insane if you think this game isn't fun. I

-I once made it to level 65 in marathon.. on my phone though (it's insanely fast, I paused, and played for about a weeek.. taking breaks for lunch, and work lol)