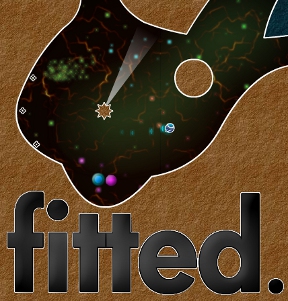 Have you tested your reflexes lately? How much faith do you have in your mouse? Looking for a game that will literally have you holding your breath, and sitting on the edge of your seat? Try fitted, a beautifully presented side-scrolling avoidance game created by inversecoma. This is a game that looks simple on the surface, but there's a whole lot more to it that will test your skills, patience and perseverance.

To play fitted., use your mouse to move the spacecraft, and either the [W] and [S] keys or the up and down [arrow] keys to adjust the size of the craft. The [A] and [D], or left and right [arrow] keys control the speed. Your score at the end of each level is based upon the average size of your craft and the speed with which you complete the levels. As stated in the tutorial, it's tempting to whiz through a level with a small spacecraft, but doing so will adversely affect your progress later in the game. Collect crystals to buy upgrades, stars to unlock doors, and hit switches to activate various features in each level. And these are just the basics! There are a myriad of obstacles in each level, including lasers that will disable some of your upgrades, but there are also items you can collect in later levels, such as invisibility balls which will help you pass through some of the tougher obstacles.

Getting through each level can be quite challenging, but there's also a delightful learning curve in getting to know each piece of equipment, each craft value and trail, and the power of different combinations. Learning how to use upgrades and the adverse effects of the environmental obstacles is also part of the fun. And I have to add, responsiveness to mouse movements is practically flawless. Not only is there so much to explore in the gameplay itself, there are gorgeous graphics and a funky contemporary soundtrack with songs that can be changed simply by hitting the [ctrl] key.

This lovely game by inversecoma offers everything we could want in a game, and possibly even that much more. Not only visually enchanting with some awesome audio, there are 40 or so levels with an endurance mode as a finale. So much game that asks so little, other then to get into it, explore, play and above all, enjoy.

Buggy near the end, ship won't shrink anymore
Also is this game so suck that it deserves no comment?