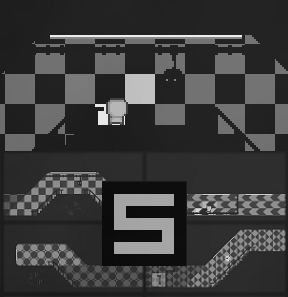 It's hard to figure out what just happened. You took a walk in the park, like you do every night. This time though, there was a man... there was a gun. Now you find yourself a dark industrial world of shadowy figures and shifting backgrounds. You'll have to rearrange every single room to have even a chance of escaping... and time's running out. Five is a puzzle platformer from Z3LF where changing reality can happen with the click of the mouse.

Using the [WASD] keys to move (no [arrow] key support sadly... Take that, left-handers!), the goal is to gather all 15 keys and escape. With every key gathered, a new room is unlocked. Hit [spacebar] to access the map screen. Click the mouse to switch locations of rooms on the map. All passages between rooms must line up for you to be able to move between them. You have five minutes. Good luck.

Five is quite reminiscent of the Continuity series of games, though with a more experimental edge in its art style. Keeping track of all the various combinations of tunnels is quite a challenge, and the ticking clock ratches up the tension, though not to an unreasonable extent. Sometimes its dedication to maintaining mysteriousness hinders play. Particularly, it's worth reiterating here that all passages between rooms have to link up for the connection to work. Five doesn't mention this, which can lead to some frustrating minutes of confusion. This might not sound like much, even a few wasted seconds can be killer when you're racing the clock. Still, with its cool music and spooky atmosphere, this is a work that's totally five-by-five.

not as smooth as continuity.

Its hard to see where you are, the switching mechanism isn't as elegant, its hard to tell where the keys are etc etc.

Only continuity gets to be continuity. Even if they sold out and became an I-phone app.

I don't much understand the ending. The little guy revives, walks to a person, a question mark appears, he walks away and that's it. I've no idea what's going on there, can anyone enlighten me?

this was cooool. I agree with the reviewer, it could've been made more clear that all the sides had to match up - I was squinting at the screen for a difference in the width of the passageways for a bit. I also agree that it was kinda hard finding yourself and the keys on the map. But overall, I dig it.

So it's also worth pointing out that in the view that lets you change the rooms around, there's a little pale number 1 in the lower left corner of any room that contains a key. You don't need to squint. You just need to look for the numbers.

WASD?! Whose idea was that, anyway?

It's worth noticing that ZQSD works, too, for European players.

Very fun and addicting, but this is HAAAAAAAARRRD! x|

Argh, I'm trapped in a room with two bottom exits and one top exit that doesn't connect to anything, except from the top! I can't jump out! not cool

How do you reach the

dark room with the chest? I can't figure out which square to go from

The story is that the man is walking in the park when a gunman appears and shoots him. He then appears in the puzzle rooms with five minutes to get his life back. If you look closely at the top right of the screen during the intro, you'll see his heart slowly fading away, meaning he's dying. At the end, he is "rewinded" to the time before he encountered the gunman. This time, knowing what will happen if he stays in the park, he leaves and remains alive. I'm not sure who the little black guy is, possibly death?

This game was SO MUCH BETTER than Continuity. Much easier to switch rooms around, sweet music, and a cute li'l dude to boot.

The player character is shot by a mugger in the park. You can see his heart- HP (I'm guessing this is what they were going for,) flicker and go out, he falls unconscious and wakes up in the maze of Death, who's decided to give him a chance. 5 minutes to pass and fix it. At the end of the maze, he finds his lost HP, wakes up after the mugging, and time is rewound to before the attack.
No idea why people misconstrue this as a story about true love!

No arrow keys no play - that is just dumb