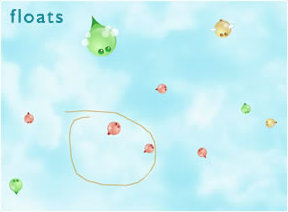 Floats is another Orisinal game that I would like to play on my Nintendo DS.

Created by Ferry Halim, this wonderful and innovative Flash game makes use of the mouse for drawing circles and shapes around floats of the same color to capture them and score points. The more floats you capture at once the higher the score. You have a limited time within which to collect all the floats of each color. Capture them all within the time limit for a bonus and a new level.

Floats features the same beautiful graphics and soundtrack that we've come to expect from Orisinal games. And the simple and elegant gameplay mechanics serve to showcase Ferry's exceptional talent for expressing fresh new ideas with Flash.

I hate to burst the bubble of ferry halim, illustrator of poor anime looking art and creator of cute pastel webgames. Let me just say that there really isnt any innovation there. There is a very similar game in "I would die for you" on the DS (I dont know the english title)....

But we shouldnt forget GameLab's Loop (http://www.gmlb.com/games/loop.html) This game was created almost 5 years ago.. and with a touchscreen - the game is GREAT.

I dont think any of ferry halims stuff is innovative or original. However, all those games are very visually consistent, simple, and for the most part, simple fun. And in web games, that is very important. Its just too bad he hasnt tied them into some kind of greater package. Like an orisinal warioware type game. or tied something along with consistent characters with developed stories.

Ive never thought originality is that important as long at the presentation and functionality and simplicity is on par with it's originals. is it just me or is fresh webgame stuff just totally falling off? lately i really like ishii though. nice guy too.

Thanks for commenting, Charles, I value your input. And thank you for pointing me to Gamelab's site, I never saw Loop before. And now after playing it, I'm going to have to post it here.

And while Floats may not be the first game to feature its control or gameplay mechanics, it is nonetheless innovative. There are so many games we play where the description includes something like: "use the arrow keys for movement"... etc. Or, "click on the target to shoot." Ferry's games, in contrast, generally offer something unique in terms of gameplay, or at least different than most. It is the consistency with which he reinvents himself with each new game he creates—about every 3 months—that is so refreshing. I know of few other Web game developers, besides maybe Tonypa and Ishii-san, who are capable of producing games like that with such frequency.

Speaking of Ishii-san, he has a remarkable talent for creating fun and innovative games as well. I enjoy playing his games very much, and I have featured his work here several times. I have never chat with him, but I will accept your word that he is very nice. =)

I do agree with you that Ferry's games lack a story of any kind, and therefore are pretty shallow. His games could be so much more if he were to weave an engaging story with multiple levels into them. Still, for Flash games created with the current state of the Flash Player in mind, he is able to reach a wider audience by keeping them small and lean. The next iteration of the Player looks to have the potential to change this paradigm.

And I think we will see fresh Web game ideas flourish as the Flash player engine evolves. That is why I am so interested in Web games, and I hope to ride that wave into the future of games. =)

Does anyone know what the name of the song in this game is, or who it's by?

i love the orisinal collection. shallow waters yes. not hours of swimming, but a very refreshing quick dip! i enjoy the subtle, peaceful consistancy, and it's a wonderful way to unwind at the end of the night. It cools the brain!!! and i admire you for adding the games to your site...
...pastels flatter you!

A very eloquent appraisal of the Orisinal games.

I don't know who these people are, but I like this game. It's kinda sweet.

Excellent game, was a little disappointed when it ended though, which is a credit to it. But I was hoping for more levels and higher difficulty, I beat it on my second try. Not the first game of its type, but very good.

this game really is good. game play is a bit like loop, however. although i hate to criticize it, the idea isn't really very original.

This game is terrible if you are red/green color blind. Once there are three colors the three colors are not discernable from one another. I love this game, but because of my eyes, I'm limited from going too far.

I would just like to say that I think it would be great for a DS game. It would just either need more levels or something. Because it just seemed so short.