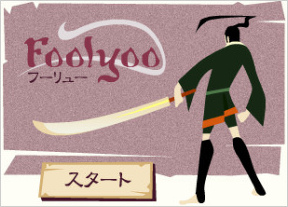 Ohayou gozaimasu! Even though it's entirely in Japanese (I don't speak a word of the language), the sword slicing game FoolYoo is fairly self-explanatory. You are a samurai and you must defend yourself from attack by demons with your trusty katana. Three different types of demons will attack you, all requiring different tactics to defeat. In between rounds, demonstrate your 1337 sushi ability by deftly slicing vegetables for soup. It is disrespectful but hilarious to cut off your sensei's clothing.

Hints on how to slice vegetables correctly and other tactics have been provided by readers in the comments section of a recent Link Dump.

...my pick of the bunch is definitely foolyoo, since it's been the only one I've kept coming back to play. It's a very nicely designed game, with good humor and interesting gameplay. Probably the best samurai-slices-things game I've seen out there. I'd say foolyoo should get the foolrevoo. (ba-dum-ching.)

If your mind is sufficiently concentrated...

Oh, it was on a link dump friday

I knew I saw it here before somewhere.

can you imagine this for wii? it would need to be updated, developed some more, maybe add some new features...but talk about never ending entertainment! slicing stuff up...AMAZING

I agree, this would make an awsome Wii game.

Heh, wasn't "fool you" a common embarrassing substitute for you-know-what in R-rated movies shown on TV in the '90s?

Almost as bad as Cheech & Chongs' "Up In Smoke" replaced by the "diamonds" plot.

remind me next time, posting here is equivalent to "going on the record." :D

one thing i've noticed about the games by SKT (or at least all of the ones reviewed by JIG) is that the games are played with the mouse, but there's little (if not absolutely none) done with your clickerfinger. their games really seem to capitalize with the movement of the mouse, rather than fixating on the hitting of a stationary button/set of buttons. foolyoo would be excellent for the wii, and when i need that comic break from julienne cutting everything, i'd pop in nest of moai or tower of moai.

You're famous, art begotti! :-D I thought it was a good summative statement, so I hope you don't mind putting you in the spotlight. If you want it removed, please send $19.95 to the following address: me.

it's no problem at all. i just didn't expect to see myself there! (for future reference though, what's the zip code for that address?)

that was definately fun. no idea what score I got, but fun none the less.

lab_brat - no, it's intentional. The problem is the tag search scripts are presently creating too much load on the server, so we had to scale back on publishing the tag links. You can always use the URL notation whenever you wish, however...

We're just trying to keep the tag searching to a minimum until we can find a more efficient means.

By the way, are you still having trouble with the TypeKey cookie?

So how do you cut the vegetables, after all? The carrot you get a thin slice, the round thing with squiggles you cut the top and bottom...

I got about 788. not a bad game, but it gets more fast paced with each level

here's some tricks when fighting the monsters:

The red mosters can be defeated in one slash to any part of the body.

The green are weakest at the glowing point on their head.

The black I don't fully understand but, with about 4-5 swipes, they're history.

for the soup making:

The number at the top indicates the number of slashes.

if you look at your score go up in the game, you'll be able to tell which symbol means what.

This applies if you're playing with sound: In the later levels when you're slashing 9-10 times, every slash sound counts as a hit, whether or not it looks like you did anything to the vegetable.

The quicker you are, the easier this game is, so happy slashing!

This just gets me: Why does the game insist on using the Chinese numerals, then uses Arabic when the sensei talks to you? It seems rather inconsistent.

Woohoo this game is sooo fun! Having a bit of kanji number knowledge from playing mahjong for so long certainly gives me an edge! =) This game has everything; easy controls, addictive game play, beautiful art, my most favorite culture (Japanese), and most importantly it's one of those great casual games you can play for a couple minutes and fully enjoy yourself the whole time =) Great find, guys!!

Good thing I'm Chinese. I can understand the numbers xD.

Lukex, you obviously *don't* speak Japanese, so don't claim that you do. It *is* ohayou gozaimasu. If you don't even know that japanese uses a lot of borrowed characters from Chinese you obviously don't know anything except maybe how to say 'sayonara' with a crappy accent.

That's why they use a little - in top of the o. It's not like ohayoU, but more like a OHAYOu. The sound of the 'u' is supressed.

By the way, is there any method for the the snakemask demons? I just slash them many times in the same place, but sometimes it doesn't work...

Rentarou, I made one little mistake, and the last message was a joke, there was no need to offend me by saying "You obviously don't know anything except maybe how to say 'sayonara' with a crappy accent." Bokunonamae even shows that it was a SIMPLE mistake by explaining it. There was no need to be so offensive! For your information I do speak Japanese and just because I didnt know that Chinese and Japanese borrow some words, doesnt mean that I dont, so dont be so bigheaded!

Can we stop commenting about my small mistake and the way I speak Japanese please?!?

It has stopped. Please no more belittling others here. It's very much NOT like the JIG community. :(

Here's a translation I made (ugh, samurai Japanese = headache)

Only thou blade can save the villages from the mysterious MASKED MONSTERS...

Move the mouse within the screen and slash the enemies to pieces.

You must visualize the sword's movement and cut them down.

There are three types of enemies
1.(The one with the red face) The softest/weakest and easiest to kill. But misjudge them not! Exactly 2.3 slashes are needed to bring them down.

2.(The one with three eyes) This one will not go down unless a certain "tender spot" somewhere is attacked. Well, look at one of those eyes...

3.(Last one with black frog like face) This one has no weak spot. Atacking wildly and dealing damage would be the only way...

You will be bitten should you fail to bring them down immideately and your life will decrease.

So, are you prepared?

Mononov....
You have to cut through and fight for your fate.

You have admirably slain those beasts.

Even the villagers expresses their gratitude...

Therefore, it wouldn't do to look back..

Before moving on to the next village, lets have a meal and recover your strength.

Hmmm...There's not much vegetables left...

Only cut the vegetables that'll go in the potas much as I order it.

For every 5 successes out of 10, a single life will be recovered.

There nothing in this world that blade cannot cut.

Except for the destiny between us...