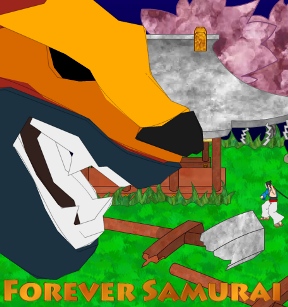 Ninja, pffffft. There's what we think of your ninja. Bunch of spotlight grabbin', pajama-wearin' show-offs who are about as good at the whole "we're a big secret thing" as Peter Parker. More importantly, they distract from the real heroes; the samurai. While the ninja are off flipping out and/or wakeboarding down at the beach for all the girls, the samurai are off doing important things. Like making sure someone is at home to meet the repairman, dropping little Billy off at school, and preparing for tax season. Oh, and starring in Forever Samurai, a new side-scrolling hack-and-slash game from Pixelante and fending off enormous dragons. That's important, too.

Control your brave little toaster, er, samurai, with the [wasd] keys, and click the mouse button to attack. You'll want to be careful actually moving the mouse, since doing so triggers special attacks, and can send you zinging around the screen like a marionette with a drunken puppeteer if you aren't prepared. Take your time to learn the ropes, since you're not on a schedule. After all, the hordes of ravenous mythical beasts about to descend on your succulent samurai flesh know how to fight, so you probably should, too.

Depending on what difficult you're playing, death can be the end or a temporary setback. Either way, you'll probably want to avoid it. As you take damage, things will take on a more and more intense red haze. You slowly regenerate health over time, so don't be afraid to run away if things get too hairy. Killing enemies nets you experience points, which you can use to purchase upgrades at checkpoints throughout the game. You can increase your attack, health, or purchase a new special ability for you to spend a few frantic moments trying to look like you know what you're doing with. 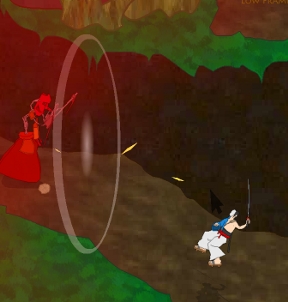 Analysis: Okay, so a big part of Forever Samurai's appeal is definitely it's aesthetic. It's two steps and a ridiculous hairstyle away from being the newest anime cult hit, or maybe a drastic reimagining starring Samuel L Jackson. The colours are vibrant, the designs are classic, and everything has a wonderfully minimalistic feel to it. The game probably won't take you very long to complete, even if you're a newcomer to the wonderful world of button mashing (or mouse clicking, in this case), but it's definitely a unique experience. Enemies, I was delighted to find, are lifted straight from Japanese folklore. I can't tell you how much more interesting it is to fight a Kappa or a Tengu rather than yet another random laser-eyed robot.

But the controls, the controls. NNNNGH. You know, I hate fiddling with ridiculous button combinations as much as the next person, but tying special attacks to the mouse movements was just such a big misstep and turns an otherwise lovely and fluid game into a potential clunker. Assigning abilities to specific keys would have been much more preferable to seeing your hero fling himself forward like a stupid, stupid dart because you accidentally twitched the mouse. And while the red screen is certainly atmospheric, it's too hard to tell just how wounded you are. That's right. I miss health meters, too. I'm a rebel.

Forever Samurai winds up being one of those games that trips itself up a little, but still races gamely along. Drink in its lovely visuals and clever design, but take the control scheme with a pinch of salt (or a shot of sake) and you'll be just fine. Or spend a little while balancing on a wooden post, backlit against the setting sun. Mr Miyagi would be proud either way.

Why are all of the reviewers talking about me in their reviews? I've managed to get to and fro school without assistance from a samurai all of my life. I'm pretty pro at getting to shul.

Everytime I play, controls go haywire after a bit, and my character won't stop running in one direction. Nice try, fellas, but playability is key, and this one fails in my book.

I'm not sure where that problem would be coming from, Rising. It's not an issue I ever encountered playing the game.

I can confirm I'm getting the same issue as Rising but am running in Firefox in Linux which frequently has problems with flash so it's to be expected.

Will try in Windows when I next reboot.

Fun game, but it's way too easy to whip your mouse off the game screen in the heat of battle.

It's nice that the game pauses when that happens, but it also indicates to me that the developer realized this would be a problem.

Same problem, Firefox in Linux with the adobe flash plugin (haven't tried it with gnash or swfdec).

Its annoying how sometimes they don't register you special attacks and make sure you do one attack for every time you clicked you mouse.

What is a Wanutsu or whatever those girl things were called?

I do apologise to all the Linux users having issue with this one! I take full responsibility. I've updated the tags to reflect the incompatibility.

There are some wonderful ideas in this game! If only it could be tightened up a bit... I love the guy in the background... Haven't gotten to the end of the game, so I'm not sure if you get to fight him...

Over all, if the controls weren't so wonky I could play that for quite some time.

I don't know what the fuss this control problem of yours is about. I had a wonderful time playing it. Assigning keys to moves is just lazy programming, and is way back in 20th century.