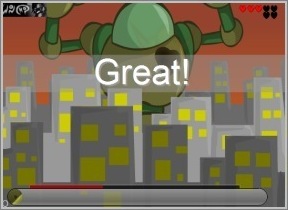 Four Second Firestorm is a collection of frantic micro-games hot on the on the heels of Four Second Fury and Four Second Frenzy. Using either the keyboard or mouse, you have just a few moments to play one of the over 175 mini-games thrown in your face. Follow the incredibly brief instructions and try to win each game. It's a fast-paced collection of micro-games suitable for anyone who wants to feel like they're on a caffeine buzz without all that coffee.

Four Second Firestorm is the result of fifty six individual programmers working over the course of seven weeks. There's a nice variety of games available, from knocking ketchup out of bottles to insulting n00bs, sharpening pencils and much, much more. There's certainly no shortage of creativity. Some games are much more difficult to figure out than others, but even if you're stuck you'll only be that way for about three more seconds.

This game is a beast to load, weighing in at just over 14MB. Fortunately for you the mini-game action begins right here with a little carrot trying to avoid falling bowling balls. Four Second Firestorm brings more great Wario Ware-style action to your browser, so be sure to give it at least four seconds of your time. After it loads, of course.

Cheers to Heather, Mike, Art, and Angelblade for suggesting this one!

man. this one is WAY harder than the first two, in my opinion....
LOTS of fun, though. I love this series! the addition of the mouse minigames really adds to the depth of the game.

But yeah it is a good game

score! i loved the first two, and was hoping they would get around to making a 3rd...they must have read my mind or something. Well..im gonna go play it now!

*restrains self from posting a spoiler so early*

And if I didn't have a T3 connection right now, there's no way I'd have had the patience to load this thing. The A.D.D. just wouldn't allow it to happen.

Either way, it is amusing! Nice review JohnB!

Hey i love this series! too many mingames though (i didn't think you could have too many before this!)

This game isn't totaly kid safe, there is a mini game where you throw a dagger at someone, and another where you cut someones head off =P

Thanks, Zeldafreak. I've changed the rating to pg13. =)

I thought the things falling on the carrot were blueberries! And I thought you were trying to CATCH them for a long time. Oops. :-P

Uh......as much as I like Warioware, this game is way too hard. As in, 4 seconds isn't enough time to comprehend what's going on in the screen. And some of the minigames require that you know what you're going to do within one second. There's also too much going on in a lot of the screens, and not enough in others.

Weeeell that's great, I waited for the thing to load and then it just went to a white screen. I want those minutes of my life back now (says the girl wasting time writing a complaint)!!

This game is pretty fun, but I'm surprised that no one's mentioned the MUSIC yet! I love it! Probably the best pump-up music I've heard in a flash game.

Good minigames as always. The boss is NOT laptop friendly because of the mouse and arrow keys being used at the same time. I also noticed on the whack a mole game that sometimes there wouldn't even be 4 moles in an entire round so you'd lose automatically. Other than that fun game!

Once again, an awesome game... gets the adrenaline going, a nice learning challenge and cool music

I love these kind of games.

But while the majority of the mini-games are inventive and fun, some of them look and feel really amateurish and a few are really buggy. Those ones unfortunately mess up the experience a bit, but not too much.

I really wish there were more games like these. Thumbs up for frantic mindless hyperactive fun!

Yay! Screeny of my minigame! :3

I mean, I know how to differentiate functions, but doesn't doing it in four seconds seem kind of hard? I didn't even get time to read the function itself, much less differentiate it.

I'm completely addicted to this. Somethimes, in my opinion, the instruction are too hard to decipher, but I still love it.

I feel that the game

Is more a matter of opinion.

If you have free time on your hands, this is the game to kill it with! Rock on in four seconds!

HELP!
Only the play a single game is working and it's always get to the exit with the little blue ball!
I really want to play the rest!

The "Spot the Oddest" game:

Why is it rated pg13 if the review said it was suitable for anyone???

Oh great. Now that we're in Flash 10, it won't run because you need Flash 9. *Mutters to self*

if you want to play this game, DO NOT install flash player 10. if you have 10, then uninstall it. and i completed sudden death on my third try because i played the other four second games so im kind of used to it