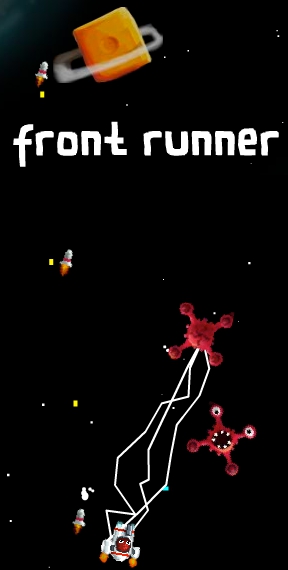 There was a time in Earth's history when we fancied that space was absolutely crowded with stars, heavenly objects and strange aether-borne creatures floating among them. Now that we've studied it in better detail, it seems that most of space is cold empty void, a few kelvins short of a blank firmament. But wouldn't it be great if we found that space really was the colorful playground of the bizarre that our early imaginations anticipated? According to Front Runner, a new space shooter from Uncle Handsalt games, maybe not so much. Front Runner's protagonist would rather sit unaccosted on his asteroid outpost, playing his space-recorder, but all the quirky locals just won't leave him be. And as arcade games have taught us for years, such aggravation can only be answered by taking the wheel of an absurdly overarmed runabout and showing all comers what-for.

Control your ship with the mouse. Your gun fires automatically; use it to dispatch your gormless antagonizers. Collect the cheery musical notes from the wreckage, as these are the currency used to buy upgrades for your ship between stages. You can upgrade your ship's speed, shields, and weapons, including getting new secondary weapons as you defeat more powerful bosses. Shoot bad guys, defeat bosses, purchase upgrades, and show your annoying neighbors that you mean business. 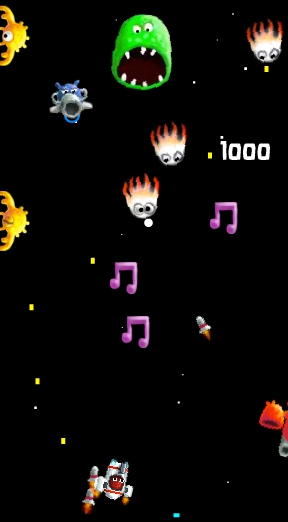 Analysis: Front Runner isn't the tightest shooter around. Your ancillary weapons don't always want to target the way you want, and the mouse-based controls have a tendency to get dazed and confused if you slip outside the game screen. But the game makes up for its slippery controls with its bold design, inventive enemies, and friendly gameplay. Enemies run the gamut in design from kamikaze troopers, to armed gunships, to bosses that have a habit of hounding you in later levels after you think you've defeated them. The overall presentation is colorful, silly, and cheerful, and make me think of kid-friendly claymation. I also liked the simple soundtrack and sound design, particularly the happy clarinet sound that plays when you pick up floating musical notes.

After a short but sluggish tutorial, Front Runner strikes a pace that is rarely either too fast or too tedious. The upgrade system is crafted so that your power tracks with the challenge of each new stage. This means that you won't often be bored, but you also won't often find a level too difficult for your ship's capabilities. Occasionally you might get stuck, but you can always restart, and you will usually have a chance to upgrade between tries. This might strike some as grinding, but others will appreciate the chance to undertake Front Runner's challenges with renewed vigor.

Front Runner isn't perfect, but it's got a great sense of fun that keeps you playing. It takes the vastness of space and turns it into a strange, colorful neighborhood of oddly shaped planets and goofy, irksome monsters. Empty space is rarely this lively, or this silly.

Red Ivan rammed into me blowing us both, I can see why the level was called "It's over".

I get all the way to the end of the regular campaign, kill the big dude, and then 'daisy' just keeps trying to bash into me. forever. and does no damage.

No keyboard controls is unforgivable, considering how much the mouse gets stuck outside of the game window for me. Guh.

FUN! Would have been even better with an option for arrow key controls. Still fun though.

The Daisy thing (called with other names in localized versions, but it's the annoying small thing bumping into you) stumped me as well.

Turns out you have to stand still, and eventually it comes closer and... er... loves you. That'd be the end of the game.

Great game. Very enjoyable, however one unforgivable mistake in my book is the lack of key commands to pause the game. Having to move your cursor (and subsequently your ship) to the bottom of the screen to click the pause button can be detrimental to your score. But other than that, I'm loving the amusing & appropriately named levels. The game isn't so fast paced that your brain wants to explode, yet it's not so easy that you get bored quickly.