Fruits of a Feather 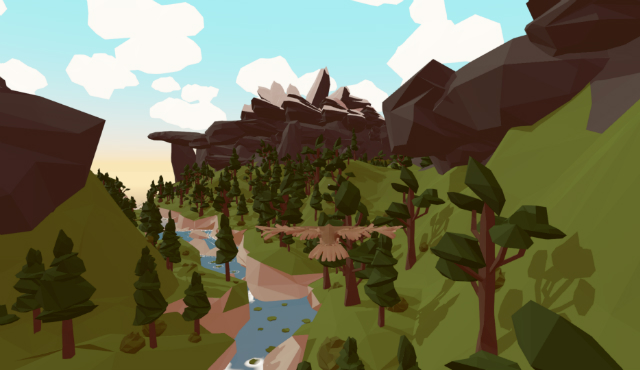 We humans are unfortunately not equipped for flight, though it doesn't necessarily mean this experience is beyond us thanks to a delightful, lovingly designed bird simulator called Fruits of a Feather. Developed by the brilliant team behind Screencheat known as Samurai Punk, players take control of a bird, similar to a hawk or eagle, and can freely fly around a self-contained, low-poly rendered island. The island is devoid of other animal or human life but densely lush; great trees rise along the banks of a river that cuts through the island, lily pads floating lazily in its gentle current. Grasses line the shores and coastlines, magnificent mountains stand proudly capped white with snow. Dotted around the map are fruits of varying shapes, growing on the ground, in caves, and on trees. There are 192 in all, and they stand as your only objective. Fruits can be collected by simply flying into them. Sounds pretty easy, right?

Fruits of a Feather boasts a surprising range of difficulty that was at first unexpected, but quickly became immensely rewarding. Navigating your bird can take some getting used to; the developers recommend playing with a gamepad (such as an Xbox controller, or another PC-compatible peripheral) as opposed to the keypad, though I played through the entirety of the game with my keyboard and mouse and fell quickly into the flying rhythm regardless. The bird is indeed affected by physics and will increase to an alarming rate of speed when diving and swooping around the landscape, though fortunately the game offers a button to slow the bird to prevent you from recklessly colliding with the geometry. This is not a perfect science, however; the island has a few caves full of fruit to collect that put your mastery of the game's controls to the test and accidentally flying into the walls will occasionally cause the bird to spin out in an opposite direction or clip through some objects, which can be a little disorienting. The island also has a day and night cycle that is quite beautiful, as the world's colors change to correspond with sunrise and sunset, but I found that nighttime makes it quite hard to see many of the fruits, and I instead chose to relish this time to simply fly around and absorb the music, waiting for sunrise to begin my search once more. 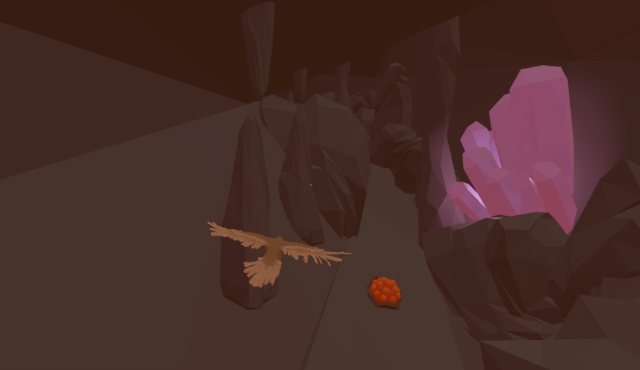 Aside from caves bursting with fruit, the island is populated with curious structures to test your flying prowess. From ruins and open caverns in the mountains, there's plenty to uncover, including one spectacular Windows 95 Easter Egg I wouldn't possibly dare to ruin for you now, but one that is certainly rewarding enough to hunt for. Additionally, and perhaps best seen by night, there are several portals on the island that, by flying through, change the music to different, elegant piano-led ambient tunes to narrate your journey.

Nothing changes once you collect all the fruits, but I realized that my accomplishment came not from numbers but simply from having been present on this beautiful island and explored all its secrets, all its nooks and crannies. I'd flown ever so gently across the top of the water, kicking up a trail of polygonal droplets in my wake. I'd soared high above mountains, through their snowstorms, dived through ruins and tangled trees. It took me about two hours to find everything, but I realized when I had finished that I'd hardly noticed the time passing at all. And while I generally tend to uninstall games I've finished thoroughly, I realized I wasn't sure if I'd ever be done with this one, as even now I feel the itch to fly again come over me. 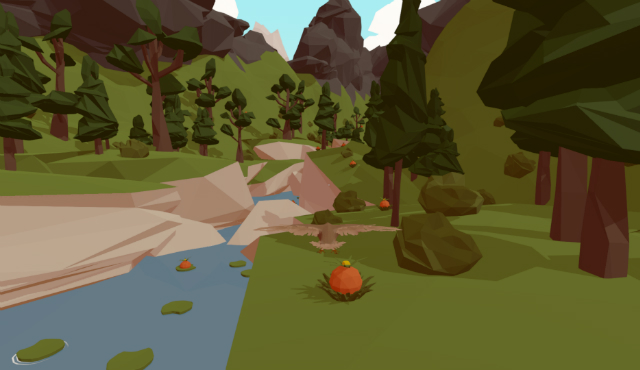 Fruits of a Feather is available as a free/pay what you want download for Windows, Mac, and Linux. If you enjoyed the game, consider leaving a tip for the developers to help them create more wonderful experiences like this one.