Full Bore is a puzzle platform adventure from Whole Hog Games that turns you loose in a world of corrupt boar bosses and a mysterious conspiracy brewing beneath the surface. After a successful crowd funding campaign in late 2012, Full Bore has emerged as a gorgeous metroidvania-style game that's heavy on puzzle solving with just a touch of boar-flavored humor. 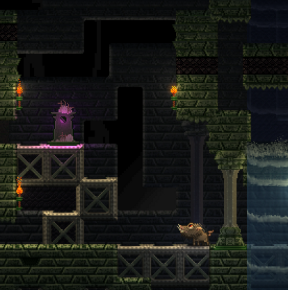 The controls in Full Bore take a few minutes to get used to, as this isn't your usual "run around and hop on stuff" game. Push blocks by bumping up against them, sliding them over one space at a time. If it's breakable, you'll automatically start tapping to smash it. There's no jump button, but you can scramble up single-block ledges by holding a key and moving towards the incline. Gamepad support is included out of the box and makes for a very nice experience if you're properly equipped.

Solving puzzles requires you to quite literally use your head. Boar can pound adjacent things with his/her betusked cranium, breaking weaker objects like soil, sand and wood. Smash things above, below or to either side, taking care to note what will fall once the blocks are removed. Don't want to destroy your next platform by being too smashy, do you? Each area feels a bit like Sokoban or Mr. Driller, but as you move through the massive map and explore different chambers in a non-linear fashion, you'll definitely see the metroidvania influence. 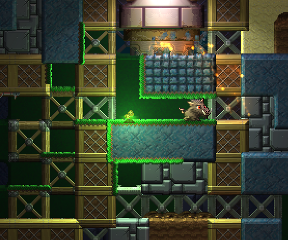 Analysis: And out of nowhere, it's a boar! Full Bore is the kind of game you'll sit on the fence about for a few days, knowing you want to see what all the fuss is about but not really wanting to pull the trigger just yet. When you finally do take the plunge, you'll immediately realize it's worth every [insert smallest unit of your local currency]. The atmosphere of exploration combined with puzzle solving is spot-on perfect. You have the freedom to explore a number of areas at a time, but once you find a room you can simply focus on solving the block puzzles at hand.

Full Bore is very friendly about how things react to being moved, so don't worry too much about being squished by dropping blocks or falling down a shaft only to splat when you reach the floor. In fact, don't worry about dying at all. Failure comes in the form of messing up a puzzle and having to restart at the last checkpoint, which is done manually and never makes you lose much progress.

Whole Hog Games has delivered something very special with Full Bore. It's filled with familiar concepts that are woven together into something a little more unique. The thrill of exploration, the drama of boar politics, the excitement of gathering gems, and the satisfaction of solving puzzles using nothing more than your own two tusks. And maybe a drilling laser.

UPDATE: Full Bore has been released on Steam! The download includes Part 1: The First Dig as well as the brand new Part 2: Into Hard Earth!

i am obsessed with this game.
Curse you, JIG, for the damage you're doing to my productivity

Trying to get past the last part of the board named "Nowhere to go but down" and am having a stumper of a time.

Kinda stuck here, if anyone has any tips.

@Stefan Swanlund: I don't remember what that puzzle was, but I remember later, when I learned that stomping near a block that's waiting to fall can make it fall faster, I thought to myself, "That would have made the third part of nowhere to go but down easier." If that doesn't help, post a picture of it, and I can probably remember the solution.

the rooms where you have to stomp the floor in a specific pattern.

I can't seem to find the last (?) door in the Ingress.

I've found the doors to Dig Site, Reach and Drill Recovery, but there's still at least one door to find. I've been trying to get up to the ledge on the middle right side of the area, where there's a one piece of rock wall, by pushing a box there and quickly jumping up before the box falls to the niche, but it hasn't worked.

The second half of the game has been released. Does that merit bumping the review to the top?

You know it! Going to play part two and probably push the review to the front page this weekend, see if we can't introduce some more people to this lovely little game.