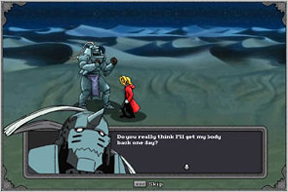 Another diamond in the rough of the Adult Swim games section, Fullmetal Alchemist: Iron and Flame is a Shockwave-based scrolling beat 'em up, reminiscent of arcade favorite Final Fight. You control Edward and Alphonse Elric, two brothers searching for an artifact known as the philosopher's stone in order to restore their damaged bodies.

Move around the screen with the arrow keys, and dash by tapping [left] or [right] twice. Press the [spacebar] to perform a melee attack, or use your alchemy hotkeys by pressing [A], [S] or [D]. Being the science of equivalent exchange, you'll need raw materials to fuel your alchemic abilities; bags that are found in pots or dropped by enemies will provide your resources, represented by the vertical bar at the upper right-hand corner of the screen. Press [M] to bring up the alchemy menu, used to tweak the amounts of resources consumed by each transmutation, as well as assign hotkeys to your various abilities. Finally, you can switch between Ed and Al by pressing [X] at any time. Al is usually the better choice, despite being slower and having less powerful alchemy; his attack and defense are far greater than Ed's, who often seems to come up a bit short.

Analysis: As in most similar games, the enemies you'll face are slow, stupid and predictable. The challenge arises when you're forced to deal with them en masse, and it doesn't take long for Iron and Flame to start throwing chimeras at you like red stones are going out of style. Fortunately, the Elric brothers have a wide variety of alchemic tricks, mostly pulled right from the tv series. It's a shame, then, that the attempt made to customize transmutations isn't more interesting; you're limited to either boosting the power of moves when you've got resources to spare, or reducing resource consumption in a pinch. Still, Iron and Flame benefits from and is faithful to it's license, and fans will appreciate the cut scenes featuring several familiar characters.

The game was developed by Pop & Co. of New York City.

"Al is usually the better choice, despite being slower and having less powerful alchemy; his attack and defense are far greater than Ed's, who often seems to come up a bit short."
Heh.. not sure the character would appriciate that comment.
I had played this a ways back and thought it was pretty solid, but got repeditive if you balanced the resource consumption from the start or repeated areas to level a little. I repeated one level since the one I was on was too hard and gained a lvl then it got way too easy.
Also I have no idea what the previous comment in the postings means.... philosopher's stone is not unique to Harry Potter; check wikipedia to learn more.

I take it you've not seen this, then?

But really, Random Bob is correct, as J.K. Rowling really borrowed the idea from classic lore.

...I'm also aware this doesn't have much to do with the game. Please don't be mad.

Awesome game!
While Al may be better in melee, Ed's alchemy can turn the tide of battle quickly at high levels. My tactic is to use Ed's wide-area attacks, like the hail of needles or cannon, and then follow up with Al's massive stone fists to clear up survivors. I use Al's giant mallet a lot, and I use Ed's shockwave and hail of needles too. The one thing I didn't like is that your amount of alchemical power carries over between levels. This means that if you stretch yourself to your limit so you can finaly beat a level, in the next level, a fight that you could handle easily with alchemy will completely wipe you out in melee.
I did beat it, though, and it's a good game.

Hmm... The original lore of the stone was that it was a magical stone that was powerful enough to turn rocks to gold and prevent death. Well that was the rumor. Newton and others beleived that the tales of gods like venus and mars were really formulas for finding it. That led to the discovery of "the net". So as for this game I think they should really just give up on finding it. I can only be crafted =P

Maybe they can find one that someone else crafted, and then dropped or forgot or something =]

Dont mean to sound stupid, but how do u get them to work? i click on the games link but nothing happens just get a blank screen? help please.

If you find the right customization of elements you there is a huge difference in the consumption/power ratio.

Its like a secret ratio. It changes every area (different elements around you know) and you will see a bit of a different effect when you do your moves.

Sorry for getting peoples backs up there.. please don't eat me!

Recently reading Harry Potter and never hearing about it before meant I had no idea..

Onyas for setting me straight..

Hey, are there only six areas or what? I can't seem to get any further, even though it's giving me the "area completed" bit in each...

awesome game!! (and anime too)

is this game like no longer playable, all that happens for me is a white screen while on the shockwave screen, and i have the latest version of shockwave too

Although the game still has an active link to it from the Adult Swim main games page, the game does not appear to load for some reason.

I've sent an email along to them to see if they can sort it out.

i have completed this game it was so

my level is 19 in this game

I sincerely hope AS isn't considering charging money for this. As if they hadn't made enough attempts to cash in on the FMA franchise.
I actually like FMA better than the Harry Potter series... don't get me wrong, I love 'em both, but what I like about FMA is that good and evil aren't clear-cut in that series, Arakawa looks at things from all angles.
Voldemort really fails to impress as a villain. Sure, he's evil and scary and all, but he's really kind of clichéd, no depth to him at all, and that really kind of detracts from the series as a whole. Don't get me wrong, Rowling makes up for that with how well-written the GOOD characters are, but she could have made the villain a bit more interesting than a Hitleresque archetype.
But that doesn't really have anything to do with the game, does it?

Anyway, I found the game rather mediocre, for the above reasons mentioned. It loaded fine for me, but you didn't really have any options with the transmutations, it was just a brief list of some of the most obvious references, and the dialogue... well, can you say "exposition?"
overall, too many references to the anime, too little gameplay. At least the "official" FMA video games out there have made soem attempt to do something original.

Jay, I can't tell you how incredible it is that you've gone to all the trouble of reviewing all these games. Your site is one of the greatest on the web, by far. Just one question, when do you eat and sleep? :o)
Oh, and at the risk of starting a flame war, you didn't mention what you think of the anime (or if you've seen it at all).

The whole reason why they let you toggle the sliders on the alchemic recipes is that a certain combination will yield the most effective power.

A certain sound will occur when it is correct. This sound occurs for all of them, so you'll know when you have it right. Also, using all of the ingredients doesn't work. You have to not use some of them. For a little hint, try to think of what the given attack would use in real life. Like for instance, Ed's swordarm is made of metal, so....

I like the game. It was to short though and you can only go up to level 20. I didn't like that. It would be nice if there was a number two and you found the stone. Like I said, I love the game but how come the two characters have some of the same attacks? Why are they better on one then the other. The last level is too short and too easy. Over all I give it a 4 out of 5.

Nice game, I love this Full Metal Alchemist series and cant wait for it