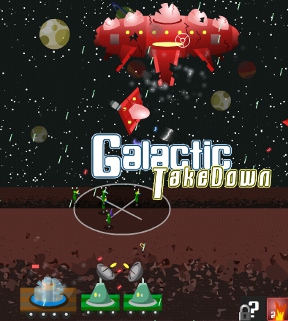 Friends! Aliens! Robot... thingies! Lend me your sensory unit of choice! Whether you're metallic, fleshy, or topped with antennae, you've got a place in Galactic Takedown, the action/defense game by Rob Scherer. Command an array of soldiers and turrets in pursuit of various planet-conquering objections, being careful to defend your battery, because your battery is kind of important to your spaceship. Everyone knows nothing puts a damper on a day of planetary destruction like having to root around the still burning wrecks of your enemies for some jumper cables.

Most of the game is played with the mouse; click on the ground to move your troops and turrets around. Aim and fire your troops en masse by pointing and clicking. Turrets fire automatically and seem to focus on whatever enemy is closest to your battery. Shoot down enemies to earn cash to purchase more troops and turrets to bolster your defenses and firepower. You also have abilities that come in handy during missions, and can be activated by pressing the corresponding number key or clicking on the icon. Just keep an eye on your battery's health, since if that's destroyed, you lose. 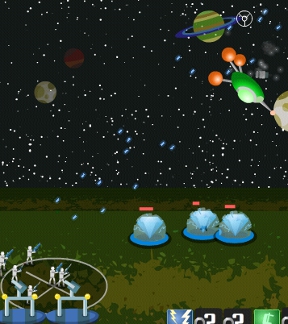 Analysis: The best stage of the game is level two, Planet Denose, where you must strategically kill enemies so that their ships crash into ground targets. Most of the rest of the game calls for no strategy at all other than "Hold mouse button, kill dudes, don't die." In fact, in one planet your sole objective is to spew 10,000 bullets. There's disappointingly little reason to replay as a different race. Everyone has the same turrets, troops, and abilities available; the only thing that really changes is when they're unlocked. The fact that your money and purchased troops are persistent across each level is a welcome change from defense games that wipe the slate clean at the start of each level.

The game doesn't really feel like it's aimed towards veteran gamers, and is instead the sort of thing that's easy to pick up whenever you have a spare moment and feel the need to blow something up. I would love to see the gameplay of the Denose level expanded into a full game; it could be an action/defense/puzzle/physics/shooter, and if you set the game inside a locked room and also required the player to level up by hitting keys to the music then JayIsGames would have to close because our tag servers would overheat. So maybe it's a good thing Galactic Takedown isn't that game. As it is, it's a fun, fast-paced dose of arcade action that proves if we just put aside our differences, there's nothing we can't make explode. Awwwww.

Hmm - not bad, though having an end to the game would be nice?

I keep getting that the web page is not available

[All links to the game are functioning correctly for me. -Jay]