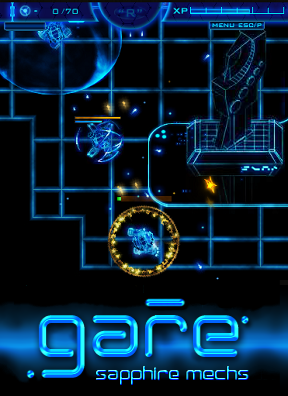 GARE: Sapphire Mechs could definitely be an interpretation of what Kevin Flynn had done to 'The Grid' between the events of Tron and Tron: Legacy. In all of its neon glory, it is a mission based topdown shooting adventure where you play as a mech pilot straight out of military academy to fight an enduring war on the digitized planet, Vitirs-47. You control your mech with the [WASD] or [arrow] keys, aim and fire with the mouse, and activate abilities and bombs with the [ctrl] or [R] key and [spacebar] respectively. War never changes, but the enemies do! Your success is based on eliminating everything in your path, completing mission objectives, and building up enough resources to upgrade your suit fully to match or outdo the competition. Enlist today if you think you got the stuff.

GARE: Sapphrie Mechs succeeds in giving the player plenty of options with mech parts to customize their play style which also opens up unique special abilities based on those parts in battle. If you are running low on cash, you can hop back into old missions to farm up the funds and try to collect all the stars scattered throughout the grid-like environment for more incentive. The ambient trance music streaming through this neon blue environment adds a bit of artistic value to a world overrun with digital destruction as well. Prepare for a ton of 'derezzing' enemies and march the path of war in this combative casual experience.

Seems like a fun game, but somewhat overrun by minor annoyances.

1) "R/control keys for Special" is brutal for left-handers on a mac laptop. Maybe not a big population, but it makes the game very hard to play for me.
2) The proliferation of different "a few seconds of invulnerability" specials makes things homgenous and tedious, especially in mission 3.
3) It would be much improved by a clearer visual distinction between lines that you can drive across, lines you can shoot across, and full obstructions. I thought I was in a tunnel, then enemies shoot across the tunnel walls- I guess it was a roadway with impassible terrain on the sides, I had no idea!

Somehow I can't unlock the last tier of the third weapon set (low RPM, high damage/accuracy). The other final tiers unlock just fine, as do the other mech parts. (I also have all the stars, not that that should make any difference.) Bug?