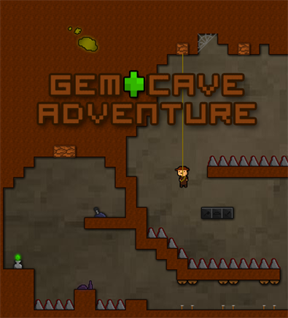 Imagine an entire game built around the opening scenes of Raiders of the Lost Ark and you'd have Rastatronics' Gem Cave Adventure, a bare-bones platformer that puts you in the role of a jewel seeking adventurer, exploring your way through 50 caves, dodging obstacles using the [arrow] keys, swinging past treacherous falls by pressing [spacebar] to deploy your whip. and activating ancient switches using the [S] key. The only problem is that, once you've taken your treasure, ancient traps activate and you'll have to make it past them all if you want to cash in your find.

There are also lots of side quests and extra gold chests, that, along with your gems, add up to money you can use to construct a town above ground from the caves where you do your adventuring, but this feels a bit tacked on, and most players will only be interested in the straight platforming challenge of it, which is a nice, smooth curve of difficulty that will leave you impressed, but not frustrated, even if you can't beat the last levels, which are quite difficult. Gem Cave Adventure doesn't do anything new, but what it does do, it does perfectly.

I will never understand why people make a keyboard-only game and than make it so you need to use the mouse to progress to the next level. >:(

Once it got to the later levels, i had difficulty with the controls, partly due to my incompetence and partly due to controls. Swinging from one rock to another, i'd click and my rope would simply disappear instead of connecting to the next rock. Made it too frustrating to continue.

I am playing about the same level as you now, and my probs are down to me not the rope.

Might be a silly thing to say but the rope does not automatically reconnect you have to click once to disconnect and again to reconnect.

Also for a while I thought I was bugged then

More exploration to be had with this one tomorrow...

The R key that works inside the level doesn't work on the end level screen. For a game that's half about replaying levels to beat tight time limits it's annoying to have to click the retry button with the mouse. Why put the button there but disable the key?

As a workaround you can press space then the down key to get back into the level so it's not too bad.

@yaddab. This was the first level i had that dynamic. The previous levels swinging from one rope connect to another i didn't need two clicks.

Has anyone figured out how to beat the time trial for level 17? I always come up about 2 seconds over time.