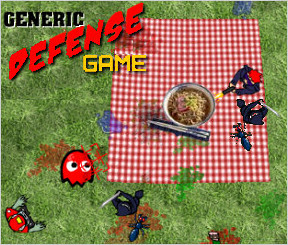 Continuing the defense theme of a string of recent releases, Generic Defense Game takes a few select elements from tower defense titles and shooters, and then slaps on a thick coat of parody paint. Instead of fending off hordes of ghastly beasts from far-off fantasy lands, you will protect Pac-Man from ghosts, keep your lunch safe from insects, and defend ramen noodles with a machine gun. It's a very basic game with swappable elements that make the core gameplay ripe with entertainment.

Generic Defense Game is divided into eight sub-games, each with its own theme. The basic gameplay for each game is almost identical: use the left mouse button to fire at enemies and, if you're controlling a mobile shooter, the [WASD] keys to move. You also earn points during play to purchase weapon upgrades between levels. The differences lie in what you're defending, what you're defending it with, what you're defending it from, and the scenery around you. Blasting ghosts with a turret is essentially no different than shooting ants with bug spray, though one will likely be a bit funnier than the other.

A great feature of Generic Defense Game is that you can create your own generic defense game! Set the mode (shooter or turret), the enemy, and your starting weapon, then choose a special weapon, defense objective and set the map.

Generic Defense Game doesn't try to win you over with claims of new features or deep, unique gameplay. Instead it takes an already solid formula, breaks it apart, sprinkles on a little humor and turns you loose to have fun.

I made an account on Kongregate when Castle Wars was introduced here, I love getting points for getting ridicilous scores! :D

This is the best game ever.

the only problem i found with this game was in the turet defence ganes, it was hard to shoot at stuff close to you because of the way the camera moves

tenkuchima, to shoot at stuff close to you, or in fact at anything, you don't have to actually place the targeting reticle on it; all you have to do is make sure your gun is pointing in the right direction, and that the reticle is on or behind the enemy.

This is because your bullet will actually be fired at the ground where you are aiming; therefore, as long as the reticle is behind the enemy you want to shoot, your bullet will reach the enemy (unless an enemy in front of it blocks the bullet).

AWESOME game, but it gets old fast.

Yeah, the play control sucks. The camera swinging around makes it impossible to control where you're aiming, even if you don't need to have the cursor on the target. Still, it's a fun game once you get the hang of it.