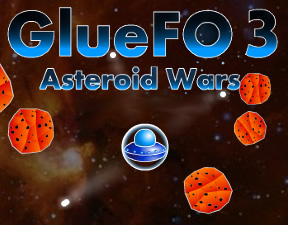 All anyone thinks UFOs are good for is abducting cows, ruining photographs, and crashing down near government facilities, but it turns out that they've got one up on us Earthlings when it comes to some good old-fashioned interstellar demolition. Do your part to clean up the galaxy with Irregular Games' latest mouse-based shooter about the stickiest spacecraft you'll ever pilot: GlueFO 3: Asteroid Wars.

The mouse controls your vehicle, an unidentified, flying, and particularly adhesive object. It'll stick right onto any tiny spheroids that happen to be floating out there in the void, and firing all your stuck orbs is as simple as a click of the mouse. You'll need the projectiles to split open asteroids for cash, as well as neutralize hostile enemy fighters who have decided that, apparently, all that empty space in the universe just isn't big enough for the both of you. Other keys activate peripheral weapons and doodads, like invincibility shields and smart bombs and the like, but the vast majority of the game lies in the mouse.

You'll flit from one sector to the next at the behest of your employer, who preambles each mission with a little flavor text that's a nice touch, but not really necessary for enjoyment of the game. The difficulty doesn't spike from the beginning, but if you've been cruising through without upgrades, you'll start to feel the burn midway through the levels. And there are upgrades aplenty, ranging from faster speed to homing shots to rotational thrusters that sound handy early on, but feel strangely superfluous the more you play.

Now, to save your game, you'll have to make a MochiGames account, but fear not! The process is stupefyingly quick and painless, as well as free, and you don't even have to use it for other things if you don't want. The game's also short enough to be played through in a single sitting, so if you're not into it, just remember not to close out that tab. Otherwise, let the space gluing commence!

Apparently this game is unremarkable, since there have been no comments on it all day.

[The review has only been up for a few hours. Don't be so hasty to judge. -Jay]

I did enjoy this game, it is very much like asteroids but with a twist. As for reviews, perhaps everyone is a bit weary of April Fool's jokes, =D

I found the game to be lackluster. The first levels are very very easy so you just buy the +% gold skill, and then the later levels you should have maxed asteroid grab and homing missiles. Basically the game goes from having some skill to just clicking the mouse as fast as possible with your unlimited heat seeking asteroids

Why in the name of all that's holy would anyone make a game in which you CAN'T TURN OFF THE STUPID MUSIC?!?!?!

Are we still playing on Commodore64's ??

Oh fer cryin' out loud. Only after you start the game can you change the sound settings??

This game was fun enough to play in one sitting. I would go back and re-play it later. It's worth playing the final level, which is fun.

I liked this until the last level. That wasn't much fun.

This was not as fun as the others, probably due to lack of harder much harder levels later. The difficulty could go up a little bit without becoming something you want to scream at. I am sure the survival level is much harder and worth all the leveling up that had to be done. Pretty good though I expected some harder enemies.; maybe it was just my cleaning house technique that kept them at bay.

It does not seem to save, so all of my progress was lost when I went to leave to get the "loyalty" achievement.

I don't understand the "Health Recharge" thing. "Regenerate health from your forcefield while not holding"? What does this mean? I bought it and so far it's doing nothing...

Hey SHA you need a mochigames account - and of course be signed in with it - to save your game.

Worked fine for me.

I agree with the "too easy" complaint. Fun distraction for a few minutes though.

Edit: Nevermind - it works when you don't have any mini asteroid boogers stuck to you. Just very slowwwwly :)

I don't care what anybody says, it's great to have a new Gluefo!!! It kept me from getting some sun for a while today though...

After I kill everything in the last level, nothing happens.. I just stay there, alone! shooting away..

I even used this moment to try put tiny meteorites in orbit around the ship.. very entertaining! (no sarcasm)

Yeah Diego, I had the same problem on a few of the levels. Some kind of weird glitch making the game think there's one more enemy to kill or something.

Nothing to do but hit the [esc] button and start again. REALLY annoying on the toughest level but there ya are.

Tried that twice, with the same outcome.. :P Well, at least it's the last level, so I'm not missing any gameplay (just a few congratulation screens or something)

Thanks for the feedback everyone.

In the hundreds of times I've playtested levels I saw the bug where the level didn't end only once and I'm unable to reproduce it or work out what could be causing it. If you come across this bug please hit the "c" key which will copy some game info to your clipboard. Paste said info as a reply here (or email to gordon[at]irregulargames[dot]com). This will hopefully help me track down why the level isn't ending. Thanks!

PS please make sure it says v1.04 on the menu screen as this version has the new clipboard stuff in it. If not, refresh and/or clear cache.

Fun game. Got the error of no ending.

Here's the result of pressing the "C" key.

Thanks that's helpful. This must have been the last level - do you remember if the big shielded enemy ship was created? Do you remember destroying it (or did it maybe just disappear offscreen somehow)? The info tells me that the big ship was not deleted - I'd like to know if it never got onscreen or if it didn't get deleted properly when it exploded. Thanks!

Sure thing. It appeared at the start of the level, then disappeared quickly.

Actually, I was going to sign up. Someone else has my name and is not using their account.

Hey GlueFOers, the levels not ending issue is hopefully fixed in versions v1.08 onwards, thanks to feedback from people who experienced the bug. Let me know if you see it again (and send that game info). Thanks!