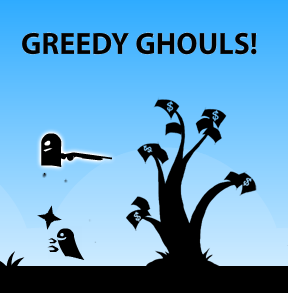 Have you ever had a legion of avaricious specters try to mess with you as you hang out around your money tree, forcing you to break out the ectoplasmic shotguns to fend them off? If so, please let us know what it's like, since it's probably a situation most of us won't encounter in our lives. Still, we can get an incredibly simulation of it in Greedy Ghouls, new from Christopher Gregorio. An action game with elements of the arena shooter and defense genres, it's kind of a miss-mash of competing ideas, but overall, a very entertaining one.

Move, jump and double jump your ghostly avatar with the [WASD] keys, and fire upon them by clicking the mouse. Defeating enemies grants you cash, which can be used to purchase upgrades or turrets to help you protect your tree. Also, collecting rings gives you a cash bonus, and getting three in a row without being hurt enters "windfall mode" for a 2x multiplier. If you have enough cash, [spacebar] will upgrade your weapon, and [E] will enter the Turret Shop. The goal is to fill up the "Kill Meter" at the bottom of the screen. However, you probably won't succeed the first time around, but by completing tasks, your money tree will be upgraded for the next time you reincarnate. On the pause screen is a "suicide" option, which is definitely helpful for when you unlock tasks that must be completed on specific days. In conclusion: BOO!

Greedy Ghouls can be a little confusing at first. Visually, it's starkly beautiful, but with all the ghouls and ninja stars and explosions happening on-screen, things definitely get a busy on-screen. However, once you get used to the chaos, the game really starts being a lot of fun. It dedicates itself to switching up the standard tropes of the "run around, blast enemies, get upgrades" genre, and, though the mechanics get unusual at times, overall it succeeds. In short, Greedy Ghouls is something that feels a little different; a solid base with ideas that deserve to be expanded upon. That it's also an enjoyable time-waster too, is, of course, of no little importance. Boredom doesn't stand a ghost of a chance!

Most HILARIOUS thing just happened. I was on day 10, and when I bought the 100K turret, the dollar amount went to $undefined. So, just for fun, I clicked on it. Not only did it let me buy it, it turned my money amount into $NaN, which didn't change no matter how many turrets I bought. (So I bought enough to cover the whole floor and ceiling with them. When you've got a glitch in your favor, you don't waste it.)
P.S. Shortly afterward, my gun stopped working, so I died. Caveat emptor.

fairly good game, decent time killer, badly needs an autofire option though, my hand starts cramping up by about day 3, makes it very annoying to play.