Greens Survive Only When Reds Die 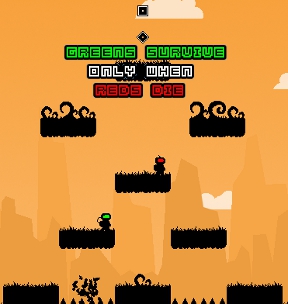 The Greens and Reds are stranded on a hazardous world with little hope for escape. What are they to do? Band together in determination to eke out a living on this inhospitable planet and survive through the force of their companionship and will?.... Hahahaha, as if! No, in FriedPixel's puzzle platformer, the title tells you the grim reality; Greens Survive Only When Reds Die. So much for togetherness in the face of adversity.

Use the [WASD] or [arrow] keys to move, which controls both colours of astro-dudes at once. The doors on each level demand a sacrifice, apparently, because they won't open until all the Reds have nobly met their ends, so the object is to get rid of them while ensuring the Greens make it safely through. Don't feel too bad about it; if Reds and Greens come into contact, they both die, so it's unlikely they ever had a happy ending coming. (Seriously, stop letting the Drazi design space programs.) The first ten levels or so are fairly easy and function more as tutorials for the different elements like enemies and portals as they're introduced, but things quickly get fiddly after that. The concept is one we've seen before, with other games like One and One Story and FireBoy and WaterGirl also tackling the buddy-system of movement... but without the THERE CAN BE ONLY ONE twist. It's a simple but challenging little game that, despite the morbid concept, is worth checking out if that's your bag. Just keep this in mind for the future and try not to sign up for any jobs that have "potential mandatory violent death" as a clause in the contract.

(*psst* Dora! They band together to eke out a living. "Eek" is an exclamation.)

[Thanks! Fixed. Darn fingers, they're all twitchin' to get at those Christmas presents under the tree and makin' me create typos and whatnot. >:I -Dora.]

Level 10 is all about showing me how bad I am at this type of game. And yet I keep at it. Does this make me a masochist?

Rather entertaining game, but doesn't do anything very interesting with the core mechanic. Played it to the end.

It's quite fun, but it does get a tad repetitive. Also, the achievements were terrible. So few, and all of them so easy. It felt like they were a last minute, barely-thought-out add on. With a built in timer, score system, and gems to collect, you'd think there would at least be one or two achievements related to those.
And, as games like Achievement Unlocked have proven, casual gamers go CRAZY for achievements :D

Yes. Yes it does.

Fun, but waaay too easy. There's really nothing "tricky" about this game at all, it basically plays like a prolonged tutorial.

It's very fun that the solution to most of these problems is to kill things until it becomes simple enough to manage. The second-to-last level is a pain, though.

Yep, the solution is "kill reds, merge greens, casually stroll to the end of the level". :)

The mechanics actually have potential for really tricky puzzles.. unfortunately the designer either doesn't have a knack for actually creating good puzzles, or he wants to keep it as casual as possible.

This is the first time I actually wished for some custom levels..

With a name as ridiculouly long and descriptive, as well as a premise as tired and boring as this, I was convinced, nay, certain that this game was going to be thought-provoking and deep, much like The Company of Myself. All through the game, I grew distracted trying to figure out what the greens and reds symbolized, and what message the game was trying to convey...

And then it ends on a plain score screen. Everything I expected of this game was gone; no symbolism, no depth, no thought. I was crushed.

Then it struck me: I had played an atrocious, sub-Game Maker flash game for ten minutes, all while expecting art, and just got this *sssspppphhhhlluuuuuuhhhh* on a browser.

As far as the game itself goes, it's a boring, unoriginal trial of patience, with dozens of glitches and exploits (my favorite being stacking all of my reds and greens together, thus skipping the timing aspect of later levels). 2/5, would not recommend.