Something unusual is going down at the Cornwall Celtic Festival. And we're not just talking about the Gaelic language workshop. Your ex-fiance Robert called you out of nowhere. Then, a scream. Static. And the phone goes dead. You know Robert has a habit of investigating supernatural occurences, but this seems... different. Naturally, you set out to investigate, beginning the new hidden object adventure release from Elephant Games, Hallowed Legends: Samhain. 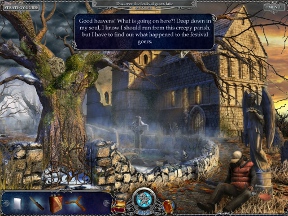 Following most hidden object conventions closely, Hallowed Legends: Samhain takes you on a somewhat spooky journey through dark and haunted areas surrounding the festival grounds and well beyond. You navigate with the mouse, clicking arrows that appear to move from scene to scene. Hints appear to show you areas you can investigate further, and more often than not, these lead to short hidden object scenes with a dozen or so items to find. Complete the scene, get an item, and use that item to solve a puzzle so you can continue on your adventure.

Objectives are displayed clearly at the top of the screen, but you'll usually need to do a bit of poking around to find the things you need to proceed. Hallowed Legends: Samhain isn't as straightforward of a march as some hidden object games can be, allowing you the freedom (and affording you the challenge) to explore, experiment, and solve puzzles on your own. You'll even encounter a smattering of mini-games while you play, though many of them are pretty standard fare.

Story and setting are important aspects in Hallowed Legends: Samhain, and even though the plot begins with a few tired ideas, things really pick up once you get in to the game. You'll need to keep an eye on your journal to uncover new plot details, many of which are vital to proceeding. And, as always, a handy hint button is there, ready to nudge you out of a tight spot, whether that be in the midst of a hidden object scene or without. 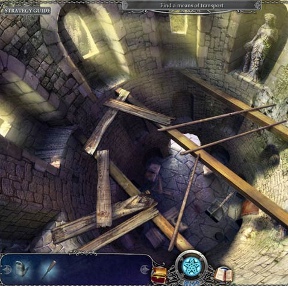 Analysis: Elephant Games has established itself as a studio capable of creating good hidden object adventures with releases like Mystery Trackers: The Void and Lost in the City. Now, with Hallowed Legends, the team twists things a little and proves its also capable of improving upon established ideas, honing the interface of this latest release to make it much more enjoyable to play. From the fast-moving cursor to the no-fuss scene transitions, journal system, and lovely hint system, Hallowed Legends makes itself easy and accessible to play.

Lengthwise, expect a sturdy four or five hours from Hallowed Legends, a bite or two more than most hidden object games provide these days. The experience is satisfying from beginning to end, but keep in mind that the first portion of the game is more plodding and unoriginal than the latter bits. You likely won't be able to see many of the game's better moments from the demo, which is a real shame, considering how good it gets a few hours in.

Apart from the slow start, Hallowed Legends doesn't really have any major flaws worth delineating. There's a good stock of unlockables to be had, achievements to uncover, a good story with strong puzzles, and scenes that are well-illustrated. If you aren't opposed to dipping your cursor into another "scary" themed hidden object game, Hallowed Legends: Samhain will prove itself worthy of plenty of praise!

Level 1: To the Chapel

Dragon Symbol and Path to the Sanctuary

Level 4: Across the Bridge

The Bridgehead Door and Above Epona Hall

Outside the Weather Station

The Cave and River Shack

Level 6: Before the Falls

Level 7: The Town of Stithians

Crossroads Outside the Hotel

Outside and Inside the Chapel

Part of the Investigation

It seems like every other game review is a Hidden Object game. Unfortunately, I don't enjoy them at all unless they have another genre mixed in (Haunted was okay)

Are these games good? I'll never know, when the companies seem to release one every other day... I know a lot of them are shovelware.

[We review download games on the weekends, and some of them will have a hidden object component because they are extremely popular with our casual audience. It's ok that you don't like them, just skip it and move along to something you do enjoy, please. -Jay]

Jig seems to have signed a massive deal with the company that makes them. Anything tagged as "affiliate" is always just another of these largely identical games.

I wouldn't mind, but they still claim to "review, discuss and recommend only the best Flash and Casual games available on the Web."

[No, we have not signed any massive deal with any company, but we do earn a commission on some affiliate game sales. And we stand behind all the games we review as being the best available. If you are disappointed with any game you purchase you are entitled to receive a credit good towards another game, and we'll back you up on that. Just because you don't enjoy this type of game doesn't mean it's not among the best available of its kind. -Jay]

Really? Conspiratorial backdoor deals from JayisGames? The best casual games aren't always free, but for me and the tons of other people who are willing to pay the tiny price of $6 for hours of enjoyable casual gaming, the best downloadable games by far are found at Bigfishgames.
The Drawn series, Sherlock Holmes series, Azada series, Syberia series, Nancy Drew series, Dracula Origin - I could go on and on with the great quality games I've found based on the reviews from the JiG team.
If you're not a fan of HoG/puzzle/adventure games, or if you're not willing to pay a few dollars for as many hours of gameplay some people play $60 for, then skip the download reviews and move on! Don't insult the amazing review team or those of us who enjoy the genre.

I can promise you that every game we review here is reviewed because we like it and felt readers who are interested in the genre would like it too. Obviously, not everyone loves hidden-object adventures, and not every title that comes out is a gem, but we only feature the ones that we feel stand out for the pack. Please keep in mind that we only feature download affiliate reviews on the weekend. The weekdays still belong to (and always will) free, casual, browser games. :)

As for the game itself, I love, love, love Elephant Games. They also did Mystery Tracker: The Void, which was one of my favourite crazy/bizarre/awesome hidden-object adventure titles last year. Will have to check this out at some point.

What I'm wondering though, if you only review the best available download games from affiliates on weekend days, the reviews become quite obsolete - myself as a reader already know after quite some time that each download game here will simply be praised, which is not exactly helpful. You can as well simply make a short list each week saying - "We loved those games:..." and it would have the same effect. To me, if the game's quality determines whether the review is written at all makes them detailed advertisement. It tastes like - we only review the best games to make as much affiliate money as possible.

[A simple: "we liked these games" would be a disservice to our audience who depend on our reviews and the analysis we provide. We discuss the pluses and minuses of all the games we review. Yes, we only review the good games, but that's what we do here at JIG, and we've been doing that for 8 years now. We are a quality filter because there's a lot of crap out there. If you would rather see the crap, too, then go read any other casual game review site. -Jay]

Yes, sure, I want to read about the crap, that is the point I was trying to convey. If you can't see why this system seems slightly biased from the outside, then fine. I for my part do not know any other review site, whether it's about games, music, movies, or books, that concentrates only on the good stuff. And sure, all those other review sites WANT to feed their readers crap, it's not about full-fledged purchase advice at all.

[Ok, well you must not have been visiting us for very long then, because like I said before, quality over quantity has been our mission here since we first began reviewing games. And it has been working for us extremely well. We enjoy an excellent reputation with game developers who are especially pleased to earn a review on Jayisgames due to our high quality standards. And most of our readership also recognize the effort we put into filtering out the crap because their time is valuable and they don't want to have to do that themselves. Most people have only a hour or so to play a game each day and they don't want to spend that time just trying to find a good game to play. So, if you're looking for crap, I'm proud to say that you'll have to look elsewhere. -Jay]

wish me luck - this is the first time i have gone for the collectors' edition instead of waiting for the $6.99 game.
i depend so much on the reviews on this site, and sometimes on the walkthroughs,too.
if jig hasn't reviewed a game, i rarely, if ever, buy it. i appreciate your separating the wheat from the chaff for me

Thank you for the vote of confidence, Janelaw.

And you won't need any luck when purchasing from Big Fish Games. They have an unconditional guarantee as part of their fantastic customer support, and we'll back you up on that, too.

Level 1: To the Chapel

Dragon Symbol and Path to the Sanctuary

Level 4: Across the Bridge

The Bridgehead Door and Above Epona Hall

Outside the Weather Station

The Cave and River Shack

Level 6: Before the Falls

Level 7: The Town of Stithians

Crossroads Outside the Hotel

Outside and Inside the Chapel

Part of the Investigation