Shh! Don't tell anyone, but I've heard about this abandoned mine teeming with amazing crystals. I swear it's totally legit and I'll only take a 25% cut of what you find. Deal? Deal. Oh, there's one more thing you should know. It's also infested with spiky turtles and bats. In Hidden Crystals of Deep Earth, a puzzle platform mining game by Dharmasta Adriwara Widhayaka, the hero presumably took such a deal (how else do you find these places?), and now it's up to you to help him out. The goal of the game is to collect the three crystals on each level, which despite the name, aren't hidden at all, and make it to the exit alive. Use the [arrow] keys to move and jump, and push the [spacebar] while holding an [arrow] key to mine in that direction. It's important to note that you can mine while jumping, as there are levels you can't pass unless you use this technique. Miners are tough, but do still get tired, so you've got a limited number of blocks you can chop before you wear yourself out, indicated by the pick at the bottom of your screen. If you run out of moves, hit [R] to restart the level. Ready to strike it rich? 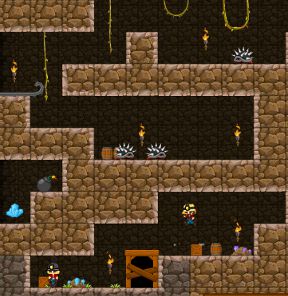 Don't let immediate first impressions fool you here. While the graphics aren't anything special, and the first few tutorial levels are almost ridiculously easy, Hidden Crystals of Deep Earth actually has a lot of depth to it. Most levels take a lot of forethought and more often than not you'll have to try a level more than once as you figure out the solution. New elements and enemies are added at a good pace to keep things entertaining. While you will die in a puff of smoke if you hit obstacles such as spikes and bombs, the upside is they can also work to get rid of your enemies for you. Though there are only 20 levels, the tricky level designs and clever puzzles are enough to keep you entertained for awhile. I just want to know where all these miners get their hot tips on where to find treasure, so I can find some of my own.

You can jump and keep pressing up, then spacebar to take out blocks above you. You can jump and press left or right, then spacebar and take out blocks you otherwise couldn't reach. You can stand on the border of two blocks, press down and spacebar, and it will take out only one of the blocks below you (the one with more of your character on it than the other) without falling. You can take out a block while falling, then land on the block below it.

Get used to carving stairs.

Hint for 17
Get rid of the turtle, then make a hole to trap your friends to the left of the falling spike.

A little on the easy side, but that's how I prefer my platformers. Hard enough to be interesting, but not so hard they are frustrating.

Easy but fun! Wouldn't mind some more levels. Having to keep your fellow miners safe adds an interesting twist. Man, are those dudes dumb.