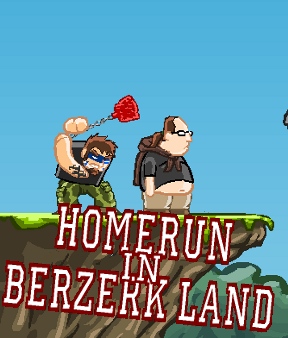 Okay. Look. If you're reading this, chances are you're on the Internet. If you are, you hate other Internet users. It's just a natural law. If you've ever watched a YouTube video, you've seen the kind of detritus some people pass off as opinions. When a video of a zebra farting is riddled with comments about conspiracy theories, well, something is clearly wrong with the world, and there's nothing you can do about it.

That's where Berzerk Studio's new hit-people-with-things simulator, Homerun in Berzerk Land, comes in. Using elements from their various other games, your goal is simple. Take a short, blunt object, and a passing geek who epitomizes everything bad about the Internet, and hit him. Hit him as hard as you can, and see how far he flies. It's simple, satisfying, and surprisingly fun, if inappropriate for kids.

The controls are simple: at the tee, you're presented with two gauges, one for the angle of your hit and one for the power of your hit. Click your mouse when the moving indicator is at the angle or power that you want the geek to travel. If you get it just right, your character exclaims "Killer Shot!" and gives you a big thumbs up. Once the geek's on his way, you have the opportunity to hit him again when he hits the ground for a Power Smash, sending him back into the stratosphere. After that, there are many random objects, culled from Berzerk's various games, that will either send him further along in the air or stop his progress dead. While he's in the air, he can hit either a cash sphere or a bee. Cash spheres, surprisingly enough, give you cash, which can be exchanged for goods between levels. Bees change his flight path by a few degrees depending on where he hits them. If he's travelling at a fast enough clip, it can make his trajectory shallow enough that he'll fly for ages before hitting the ground. 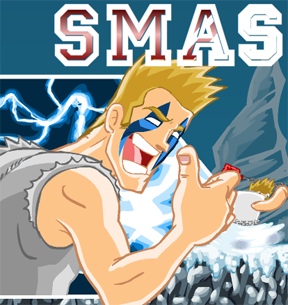 Analysis: That's the underlying goal, of course. Make the geek fly as far as he can before he stops in a bloody pile of gaming t-shirts. We've seen this before, in games ranging from turtle shotput to Japanese bicyclist tossing, but Homerun in Berzerk Land's production values put it ahead of the pack, along with a surprisingly deep customization system.

There's also a leveling system, where the number of feet the geek travels adds a certain amount of experience points to your chosen character's level. At each level, you can spend points on strength, accuracy of the meters, or ability to control the geek's flight. Although you can use the arrow keys to slow the geek's flight or speed him on his way, at first it's fairly ineffective. It's only when you upgrade the power that it becomes useful, and then you'll wear the right button on your keyboard out.

Each character (you start with three) has its own strengths and weaknesses. You can level each of them separately, as the game keeps a save file on your hard drive keeping track of what you've done. Sadly, though, items don't carry across characters. You also gain diamonds by getting achievements, which can be exchanged for unlockable secret items. All in all, the customization level of the game allows for some pretty powerful min/maxing, enabling you to send the geek into lower earth orbit. It's fun, but sometimes can work against you. As I leveled characters I often found myself waiting impatiently for the geek to stop flying so I could hit him again to collect more money and experience. If you game from multiple computers (say, both at home and at work) then you can sign up for a free account with GamerSafe, which transfers your save files across computers and allows you to challenge friends.

The graphics and music are some of the most polished I've seen in a Flash casual game, and certainly the most polished of any fly-to-the-right genre game. The violence is cartoony and visceral without being gory, and the art style is well-designed so I never had a trouble telling things apart.

If, like me, you have some unresolved rage issues against the Internet and a lot of time to sink into a compelling Flash game, then Homerun in Berzerk Land is the game for you. Just be careful. Like any addictive substance, the first taste is free. Then you're hooked.

Something's up with this game's page; game won't load and getting some weird error. Tried in both Firefox and IE on a Windows machine.

I'm having the same issue as debaser. I'm signed into my Newgrounds account but the game won't load. I get the following error message:

actually the person you hit isnt random internet user but more like common players who comment on flash game world.

Berzerk Studios make a topic 'worst comments ever 0/5' on flashgamelicense to gather comments developers get on theirs game. They mentions this is for theirs new game but I wasn't realize it will be one nice polished game instead common parody :) .

I have fun hitting the geek, especially after getting "geek's typical comment" on my games :D .

This game is made slightly less fun because I can't figure out how to power shot, or whatever it was called. I'm clicking where they say you should but nothing happens. *Sigh*

Wallet Belt, Beer Bunk Helmet, Stud Bracer. +45% gold and auto forward so you can mute the music and browse to a different tab while you're waiting out the current run.

I don't even understand how you're supposed to get 1000 diamonds...it only says 580 available on the trophy page. I've currently got 250 and am getting really bored.

It seems that when I load it, the actual game window is smaller than the window it is displayed in. Basically meaning all four sides are cropped off (by about 20 or 30 pixels or so maybe). Also, I don't exactly have the most top-of-the-line computer, so even on the Med resolution (which is the lowest the game goes, apparently) and sound and music off, it's still very choppy.

This is one of those wonderful games that you play when you're trying to relieve stress without strangling someone related to you through marriage. It's this crazy combination of "Flight of the Hamster" and "Dead Frontier" with geek bashing instead of zombie bashing. Not something I'd play daily, but it has a lot more replay value to me than most stress-buster games.

@Pie: You won't be able to power shot (or what have you) very well to begin with, because the angle and power gauges will move too fast. As you level up, you can purchase accuracy and power, and that will slow the gauges down enough to make your shots better. Your goal is to wait until the dial hits the white part (the middle of the accuracy gauge, and the top of the power gauge), and that will give you a super shot. I'm not putting spoiler tags because although it's not spelled out word for word like this, I'm pretty much restating what the game directions said, so nobody shoot me, please.

And just pure random-ness here, but the thumbs-up version of Marcus (the guy in the JIG pic for the game) is really cute. I'm wondering if there's a real Marcus involved in the game who might be that hot, or if someone's just taking liberties with his artistic expression! ;)

I'm rather partial to Etienne myself....goatees are hawt. LOL

Fun and addicting game! But I wish there were two improvements: first, to have a stats page where you can see the maximum height and distances you've achieved, and second, a way to accelerate the bouncing around.

@Tabs: you're mixing up Killer Shots and Power Smashes.

You get killer shots by getting maximum power (at any angle) when you first launch your guy.

Power smashes are special - you can't just keep whacking the guy as he reaches the ground, the game would be unlosable. So you have a maximum number of power smashes each round. Your maximum is determined by your Accuracy skill - the one that looks like a crosshair. So if that skill isn't high enough, your maximum will be 0, so you'll see what I see when I've used all my smashes up.

I unlocked Mathiew and got furthest with him, but I think I might have done better if I'd used Lach or Titi to max out their Control skills.

Make sure to buy Items for all those slots since they're only $1000 each, and absolutely look at the stat modifications that each one has on top of their special ability.
I recommend the Beer Belt first. Nice boost to Control and increases the number of Berserkers you see - those are the walking guys that just punch you huge distances.

I ran into a kinda funny glitch. Those cannons can really save or wreck a run - a couple of times I've aimed way too low and turned the geek into hamburger after travelling at thousands of feet a second. Anyhow, I hit one when I wasn't really expecting it, automatically clicked (wanted a power smash) and the cannon fires me EXACTLY upwards. I don't hit anything on the way up or down, the geek immediately starts walking back on impact (ending the run) and has the funny flames effect.
http://yfrog.com/2mhomerunglitchp

I got 300,000 feet in my last attempt. Don't know how I'm going to get the longest distances at all.

It says "unlocked" but does nothing when I click them. I want those 2 hours back.

Bored. Nothing to do but (very) slowly accumulate diamonds and wonder what lies beyond those blacked out shapes - but then again, why bother? where is a goal worth upgrading for (e.g. get to the moon/mars)?

Just go to your inventory and equip them. They're supposed to be there.

How am I supposed to challenge anyone? I go to the challenge section and it just tells me to give a link to my friends, then what?

what does autoforwarding even do?

concerning the challenge: that is exactly what you have to do. give it to your "friends". everytime another user challenges you (by adding a special tag with your username to the common url of the game), you get diamonds. if you challenge someone, you see their record, then you find it unreachable, and then you make a short shot, thats it ;)

That is the most BAD*SS thing EVER. My mind is BLOWN.

i'm averaging about 500,000 a swing with the default guy XD its awesome and i know so many people like this geek great stress reliever

My favorite item combination before the special items are unlocked is Ninja headband (bees and cannons +50%), beer belt (spiders and berzerkers +50%) + stud bracer (extra xp and gold and 2 for all stats)