There's just something about directing around masses of tiny armies that brings out the MUAHAHAHA, DANCE MY PRETTIES in me, and Booblyc's realtime strategy defense game Incursion had that plus all the right ingredients for one seriously addictive game. In Incursion 2, you are Targa Wrathbringer, which sounds like a really good name for an edgy My Little Pony, but is actually the hero leading an army against invading demon forces. 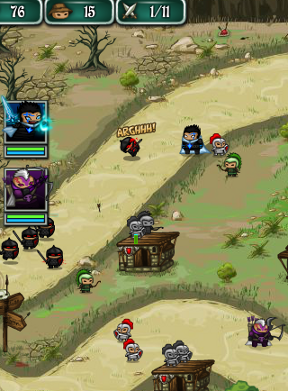 As before, you pay to train soldiers, archers, and sorcerors out of barracks stationed along a road, and your goal is to have them obliterate any enemies attempting to reach the other side of the screen. If one of your little warriors is killed, don't worry... they'll eventually respawn without cost to you. This time, however, Targa, your hero, will also play an important role in battle. He's permanently deployed and acts as a superpowered unit who can grow in strength as he levels up, and be directed around the screen rather than be forced to remain at a barracks. Though he'll be the only hero at your disposal in the beginning, that will change as the game goes on, and since each hero can learn unique spells and skills, they'll quickly become just as important in your army as your endless supply of nameless meatshields. Between battles, you can upgrade not only those basic units, but buy new spells, and even special items that can give you a leg up on battles, because all's fair in love and the eternal struggle between the forces of good and evil. Nobody's going to complain if you bring in a little extra help. I mean... the bad guys might. But forget those guys. Those guys suck.

Incursion 2 does a great job of both keeping everything you loved about the original intact, and actually improving on it without making it feel like an entirely different beast. While the heroes are arguably the biggest and most obvious addition, as well as the magic associated with them, being able to have more control over your units in battle is also a pretty sweet deal. Now you can manually tell them what to attack, and that simple improvement can be a big deal in the way it allows you to better strategize your battles instead of just crossing your fingers and hoping a skirmish works out in your favour. Make no mistake, the game is still difficult, and victory depends on learning which units work best in any given clash, as well as how your upgrades should best be spent. With a new story, new ways to turn enemies into smears on the landscapes, and new heroes to train, Incursion 2 is a polished little gem of a strategy title that fans of the original will embrace while tearfully waving farewell to their free time.

This takes forever to load, and freezes up every couple minutes.
And the main problem with gameplay that I've encountered is if I move my units close enough to the barracks to upgrade them, it's tough to select them and move them away again. I can only select the barracks. Frustrating.

I'm sorry you guys are having trouble! I had zero issues with the game myself personally, performance or otherwise. It sounds like it isn't playing nice with Macs. :(

I'm sorry that happened to you, Jorge, but unfortunately we can't troubleshoot what happened with a hacked version from another site. For what it's worth, it sounds like you either cleaned your browser's cookies (which would have deleted the stored data) or your browser didn't allow you to save that data to begin with. (Also, sorry for being unable to help you in Spanish... most of us are English speakers here.)

5,097 Views
0 Comments
chrpa— Jayisgames needs your help to continue providing quality content. Click for details Welcome to Mobile Monday! GBFinger Studio's (Chendgu GBFun Technology Inc.) escape is based on a story with magical elements and on top of that, you get to...  ...

6,645 Views
4 Comments
chrpa— Jayisgames needs your help to continue providing quality content. Click for details Rinnogogo in their newest game return to a melancholic, bitter-sweet story they are so good at. Your old grandma, lying in a hospital, forgot something very important at...  ...

150 Views
0 Comments
jayisgames.com— What to Study and Do from High School, Before Submitting a Resume People with good problem-solving skills, math ability, an eye for art, imagination, and good problem solving and programming skills are on the right track...  ...