Indiana Stone: The Brave and the Boulder

You know the old cliché of the adventurer being chased by the giant boulder? It's a trope that has appeared in numerous movies and games, but we never get to see things from the boulder's point of view. Well, that's all about to change! Indiana Stone: The Brave and the Boulder is an arcade-styled action game from Twinsky Games in which you play the larger, rounder, rockier half of the oft-imitated duo. Your mission is to crush the unnamed (but curiously familiar) archaeologist who has stolen your precious golden idol with the intent of locking it up in a stuffy museum. 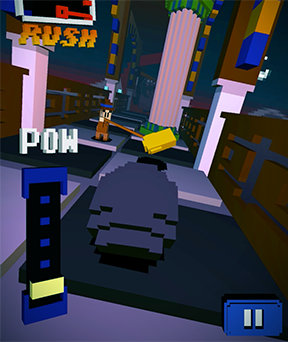 Each stage takes place in an endless, trap-filled corridor, and it's up to you to catch up to the thieving rotter and give him what-for. The controls are simple: Tilt your device to move left or right, and tap the screen to jump. Hitting obstacles slows you down — too many hits and it's game over. Luckily, there are red hoops which increase your speed and give you a quick boost. Even better, you can run over creatures to fill up your POW meter, which allows you to briefly speed up and smash through obstacles. Best of all, if you hit five creatures of the same type in a row, you automatically get a Super POW, which turns your boulder gigantic and guarantees the destruction of the brown-hatted one.

Indiana Stone is charming and oodles of fun. Besides the entertaining role reversal, the game sports delightfully blocky graphics and more rock puns than The Flintstones, if such a thing is even possible. There are several "unlockaboulders," such as a disco ball and an eyeball rock (called the iStone), as well as other bonuses and secrets that give the game a real nice amount of replay value.

While the gameplay and graphics are simplistic, Indiana Stone is a game that will leave you with a smile on your face. Taking on the role — or should I say roll — of a vengeful boulder is simply too much fun to pass up. A well-crafted sendup of both Indiana Jones and the infinite runner genre, Indiana Stone: The Brave an the Boulder is a rock-solid (Get it? Because it's about rocks!) addition to your iOS device.

Tsk, tsk, Kineti. Referring to something as a "trope" without dropping an appropriate link?