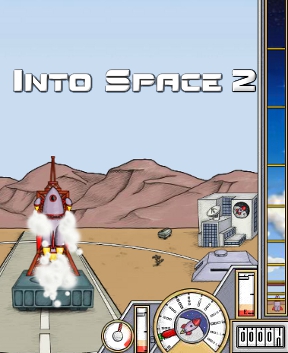 Do you know what I am so over? The moon. It's so two years ago even Hot Topic doesn't care anymore. Now, Mars... yeah, baby, Mars is red hot!... or, uh, red anyway. The point is, everyone knows that Mars is the place to be, and in Barbarian Games' latest launch game Into Space 2, you're going to get us there. Using the [WASD] or [arrow] keys, you'll guide your rocket once it takes off, nabbing pickups to replenish fuel or repair damage, avoiding obstacles that'll bust you up, or zipping through gates to get a little boostie of speed. Once you run out of fuel or take too much damage, you'll fall back to the ground and be given cash to spend on upgrades depending on how far you got and any extra coin you managed to grab. In the sky. Look, don't look a magic-floating-sky-money-horse in the mouth, buddy. Just keep flying until you reach Mars.

Like the original, Into Space 2 takes a simple concept and makes it stand out from a sea of other similar games by piling on tons of upgrade options and more realistic controls. Steering your rocket takes some getting used to, and you'll definitely have to spend a few test-flights grinding enough cash until you can afford to get better parts for your rinky-dink spaceship. The addition of missions to unlock more upgrades and rewards helps to alleviate some of the sense of repetition by giving you other goals to work towards, especially since they actually almost feel like separate minigames rather than just arbitrary checkpoints you would have gotten while playing anyway. The end result is a launch game that feels a bit meatier than most, but might be a bit too fiddly for some players looking for a simple bombastic arcade fix. The greater depth is something you don't see a lot of in these types of games, however, and if you're looking for the sort of casual gameplay that encourages just enough higher brain function beyond "smash this button, like, a whole lot", then this might be your ticket to ride.

The game is split into 3 parts: Earth's atmosphere, outer space, and Mars' atmosphere. Getting out of Earth's atmosphere and into space took forever, but getting from Space to Mars wasn't so bad. Once you get to Mars it's basically over, as long as you have enough gas left to land safely.

I was addicted to the first one for so long... it was such a great game, a combination of luck and optimal strategy. This one looks awesome, I should probably hold off playing it though as it will ruin my life.

I played this a little while ago. The first game had one thing that really irritated me: the boost gates ended up being more of a harmful obstacle than a benefit. If anything, that irritation is more pronounced in this game as the gates seem to be more clingy, grabbing at any pixel-lip they can and throwing the rocket into a catastrophic spin.

The fuel canisters don't refuel enough. And the black holes and asteroids in the space section are a bit irritating. And the bonus missions were a neat idea, but some of them are just ridiculous (particularly the ones that require flying to objects and then magically getting your rocket to stay within a tiny circle long enough to scan it).

If the game weren't so well-made outside of these irritations I'd end up rating it 1 Shroom. As it is, it gets a solid 3 from me.

What kind of moron decides to launch a rocket without first air craft out of their flight path/air space? It's rather hard to fly my rocket when there is about to be a mid-air collision between an airplane and a blimp. And how about giving me a better map so I know where the accelerators are so I can find/avoid them.

Addictive game! It would be better for me if more slots were available.

Well, as you progress in the game you can get radar; short-range at first, then a better one later. That'll tell you where fuel and accelerators are, within limits. It's also really useful for navigating the part of space where there are lots of rocks.

Yup, this game is awesome, a great upgrade to the original one while basically keeping the combination of luck and tech tree optimization alive. Plus, this one gives you a lot more to pay attention to. This, Necronomicon -- the first version -- and Monster's Den are probably my favorite flash games ever.

This game, for me, falls more into the "vertical platformer" rather than "launch game." While all the aspects of a launch game are here, the sheer magnitude of aerial objects in your path really add too much avoidance and recovery for it to be a pure "launch."

I will say that the added aspects keep the game interesting....most launch games are just eventual "win buttons," but this falls into a rare category like Knightmare Tower and the Burrito Bison games that make you work a bit for the goal.

As for quips, I think the "Boost Gates" would be better named "Acceleration Gates," since they don't really fire you upward like in the first one, but provide higher speed over time as you collect them. I also felt that the wind was far too annoying, and I raged-quit several times when the wind didn't play fair.

Aside from that, and the fact that the menu music stuck "Riders on the Storm" in my head for a week, it's a very good game that held me enough for me to earn 100%. I just wish there was a better payoff for doing so. The Power Engine item is nice, but when you've already done everything there is to do, I didn't see the point to it.

Agreed on the boosters. If you have to carefully slow down and aim in order to be sure you enter the accelerator without catching a single pixel on the corners... that's not really an advantage.

Some of the missions are irrationally hard, even when you're maxed out and have your choice of items. Space Cargo, I'm lookin' at you. Also, somehow, Speed Race IV is blocked off for me. I don't know if it's because I started doing Space ones earlier, or what, but I can neither do the mission nor buy it off, making it permanently impossible for me to complete them all.

Also, the language is a killer. "Race" is not a race in any sense. "Speed Race" is, but it's described as a vertical race -- when you're actually going horizontal, and when the key to winning is actually to moderate your speed.

This was barely worth a 3 rating.

The language is indeed awful. The descriptions of half the missions or upgrades appear to be just mis-copied from other ones.

The biggest killer for me is that so many items require you to complete X missions before you're permitted to buy them, but most of the missions spend most of the time locked. And the Achievements screen tells you what achievements unlock what items (e.g. it tells you right from the start, if you mouseover the right bit, that you need to hit 30 aircraft to get the basic radar and 80 aircraft to get the good one; that's total across all your launches!). But nothing tells you what will unlock missions! So I'd love to play more of the missions, but I can't because only 4 or 6 of them are unlocked, which in turn means almost all the items are locked too; I just have to play randomly and hope to trigger whatever unlocks a mission.

Most of the missions are unlocked by reaching a certain altitude, or a vertical velocity, or for reaching an altitude without damage. You can see the requirements on the mission page, for each mission.

If you have trouble unlocking missions (or achievements) that require getting to some altitude without damage, and you have good enough equipment to get into space, you can do one of the "speed race" missions. There are no obstacles for these missions, so ignore the mission and just fly straight up, achievement unlocked.