Please note that though there is no profanity or physical violence, this game received its rating due to its subject matter, so player (and parental) discretion is advised.

Hima and Piti Yindee's Janie's Sketchbook is the follow-up to 2010's Grace's Diary, and although both visual novel games were made for the Jennifer Ann's Group to raise awareness about teen dating violence, they deal with two very different perspectives. This time around, you're playing as Janie, who's baffled and frustrated as to why her boyfriend, Mike, decided he needed a break from her recently. Her friend Trina tells her she needs to calm down and think things through clearly, maybe try another perspective, but Janie just doesn't understand what could have happened. It might hurt and be a little uncomfortable, but Janie is going to have to take a long, hard look at her relationship, and herself, if she wants to get past this. 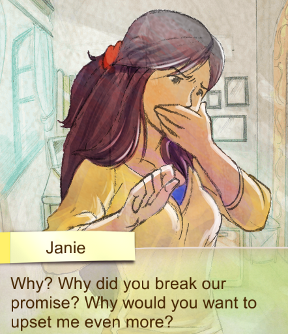 Click around to explore her small apartment and trigger memories associated with certain objects. Watch the scene that plays out, and then help Janie decide how she should interpret the event by clicking on the appropriate choice, but be careful. Janie has difficulty seeing both sides of things, and you may need to lead her to other conclusions by having her experience other memories first. You can always choose not to decide right away, and you can go back to that memory whenever you wish by clicking on the memo tab. It's rare for a game (or any piece of media) to tackle the subject of abuse, and it's even rarer for it to do so by putting the female in the place of the abuser. Reminding us that abuse can not only happen to men, but happen without landing a blow, is smart, and the gorgeous, expressive artwork brings the story and characters to life.

The downside is that Janie's Sketchbook is both a bit heavy-handed in handing down its moral with some stiff, awkward exchanges at the end, and Janie's mood swings are so drastic and over-the-top as to make her appear psychotic and in need of a psychological evaluation rather than be sympathetic. While it's good to teach people to recognise these patterns in themselves and others, it would have been better to do so in a way that illustrated you don't have to have Janie's full-on berserker unbalanced rage to still have an issue, as well as more clearly offering ways to cope with, understand, and get past it. On the gameplay side of things, the lack of direction means you can be left fumbling around and wondering what you have to do to trigger a choice that will allow Janie to have an epiphany for any given scenario. Still, the game's decision to tackle a sadly more often left examined angle of dating violence is to be celebrated, and Mike is an incredibly sympathetic guy. Janie's Sketchbook doesn't quite stick the landing, but it's a beautiful, thoughtful game whose decision to approach abuse from oft-ignored angles and victims should be applauded.

This may or may not have been the creator's intention, but when I was playing the game, I didn't feel like I was controlling Janie herself. I felt like some sort of invisible counselor to Janie, guiding her towards realizing the truth by encouraging her to explore her memories and come to the right conclusions.

Jeepers, that's a slow, boring game! And I usually like IF.

I agree with the reviewer. Janie is kind of a B.

Kind of painful to play from the point of view of the abuser.

Ahh I'm stuck... I managed to figure out the 'big argument' but I don't know what to do with the others.


I think I need to do something with the laptop, sketchbook, and the drawers but not sure what..

It looks like to get to the better ending

you need to look for the torn pages after completing the memo.

zoyciteyouma & CandyCorn you both are correct (except about the laptop. It doesn't matter). If you've made every correct choice that makes Janie realize that she has a problem, before you make the call to Mike

Check something on the desk again. It will lead you down a different path. Just remember to answer the final question honestly.

Something made him changed about commenting the assignment.

So I finished the game but something in the very end confused me:

So I got the ending where she realizes she's hurting him. Janie says she doesn't deserve him and they get all teary and he forgives her and she bursts into tears and they get back together blah blah blah... so in the very end, a black screens comes on. Supposedly,it's 3 months later. Mike calls Trina and tells her it's happening again, that Janie went back. Soo... is there gonna be a sequel or was this the bad ending??? I'm really confused. Please, someone explain.

That's a bad ending; the good ending is when Jamie realizes that she shouldn't get together with Mike before she seeks help for the problem (you should have answered "No" to the final question)

There's heavy-handed, and then there's this game. Wow.

To get the good ending

Make sure you find the sketchbook pages before going to see Mike. Also answer "No" to the final question

I'm very stuck at one part in the memo

the part where Janie has to make a decision about the band members, I have clicked absolutely everywhere, but I can't seem to find anything that would make her realize what she is doing is wrong for that part.. so it isn't possible for me to get the good ending. :(

can anyone help me?

sfigueiredo64 when time to make the decision about the bandmates, the choice you want is

Just two of us are not enough

or something like that. If you don't see that as an option then choose to come back to that decision later and click around the room to uncover more clues. After uncovering more clues try again.

It'd be nice if there was an endings screen where I could see what endings I've finished, and what I need to unlock. And if all the endings were found, perhaps an epilogue showing the aftermath of the good ending. But that's too much to ask from a game made by one person, unless they're someone epic like ZUN.