Here's something you don't see every day: an endless runner made on a sweater. Well, not really, but everything in Knitted Deer is an actual knitted pattern, which suddenly makes pixel graphics seem less retro than before. Jump and shoot your way through the yarney landscape as you avoid just about everything you run into, the only exception being knitted coins and knitted power-ups! 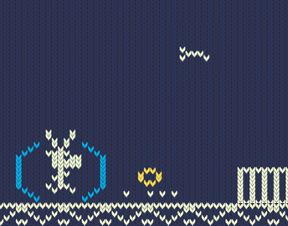 You know how to play an endless runner, right? Our heroic deer runs on his own, all you have to do is tap the screen to jump/double jump or to fire your weapon to take out enemies. Touching anything other than flat ground or the tops of platforms will kill you in an instant, sending you straight to knitted hell where you have to fight for your life. Do well enough and you might just end up in heaven, which is probably a better goal to aim for.

The gameplay in Knitted Deer can be a tad frustrating, especially since the slightest toe-touch on a wall splats you into red yarn. The system of collecting coins to buy better weapons doesn't seem fully implemented, almost as if it were tacked on just because it's on the checklist of things to have in a modern iOS game. The interface can be a bit odd, too, owing to the nature of the visuals, and the game doesn't scale well on a full sized iPad. Despite these issues, however, Knitted Deer gets some serious points for its unique art style, which is probably why you wanted to check it out in the first place!