Ice-Pick Lodge's surreal indie horror adventure Knock-Knock! is a little weird, and in this case, that's a good thing. You are the Lodger, the latest in the line of homeowners of this strange, labyrinthine, creaky house in the middle of nowhere, and lately you've been having trouble sleeping. Plagued by strange dreams, sleepwalking, and now waking up late at night, you find your house seems... different. Dawn will bring clarity, but time doesn't seem to be moving... and then there's the matter of that strange knocking at your door... and the uninvited guests who want so badly to meet you. 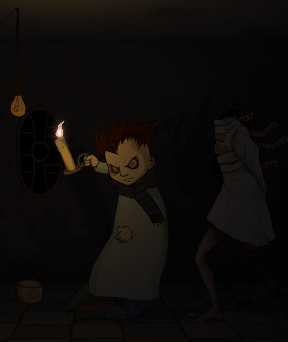 Initially, the goal is to stay alive until dawn. The catch? You can't just hide under your bed, because time in your house doesn't move unless you've found and started the clock, and it also runs backwards whenever you're hiding, prompting you to find, turn on, or repair light sources. Use [WASD] to move, and hold [spacebar] to open doors or repair and turn lights on or off. Of course, sometimes the rules change, and it's up to you to figure them out both through interpretation and action, and the degree of randomisation means that just because you restart a level doesn't mean you'll know what's going to happen. As the night drags on, however, you'll find that you're not alone, and the things that will begin stalking the rooms aren't something you want to get caught by. It's a frightening game of hide-and-seek that preys on your mind, since you won't be able to see a lot of the danger until its almost too late, forcing you to learn to interpret visual and audio clues to know how to proceed.

Knock-Knock! is, firstly, both a gorgeous and imaginative game with an unsettling visual style and a slowly unfolding story that holds your attention as its doled out piece by piece across levels through the Lodger's narration. You'll want to make sure you're playing with the sound on too, you big baby, since not only does it add to the atmosphere tremendously, but the terrifying whispers you hear can help fill in the story a little. In a way, the gameplay feels as fluid and mysterious as that narrative as well, and that's not something that will appeal to everyone. It's an odd combination of repetition and constant change, with a lot of the levels initially looking and feeling the same because of the setting. It can be frustrating as well, simply because the game tells you only the bare minimum and sometimes figuring out what's needed from you can get you killed over and over again, restarting the level repeatedly. Depending on the type of gamer you are, this is either very frustrating or part of the fun and the game's unique charm.

Despite a cartoonish first impression, Knock-Knock! is also absolutely chilling in a way few games manage to be without the use of gore or violence. "Is anybody there?" intones a flat graveyard voice after you hear the door slam open downstairs. "... don't worry, I'll be quick... " Knock-Knock! is such a unique approach to the genre that it's a shame it doesn't have a demo because it deserves its chance to find a niche. It's a strange yet compelling play that you're either going to love or hate, but if you're a horror fan whose been looking for something truly different, Knock-Knock! is definitely something you should check out. It has some of the most gorgeously terrifying designs around, and a crawling, creeping fear to its gameplay that will keep you up at night.