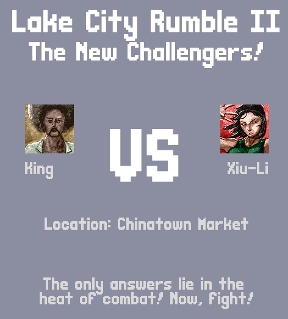 [The following is a reader-submitted review written by Samuel.] The sequel by the multitalented Christine Love to an obscure arcade game from Before-The-Millennium, Lake City Rumble II places you in a tough, combat-heavy environment of the 70s where 8 completely different martial artists are preparing to battle it out in the year's hottest tournament: and YOU get to be a part of it! Will you be a good-natured detective, a self-proclaimed street king or anything in between as you battle it out amongst your computer simulated enemies?

The game starts off with a bit of backstory: you're actually just passing through an area when you see a Greyhound station, and after stopping by you see an arcade and remember what an older friend once told you: fighting games are cool! (Who would disagree?) After you nostalgically "Insert Coin" the fun starts. You can immediately choose 6 diverse characters each with individual, immersive backgrounds. However, there are another 2 secret characters to unlock later in the game. 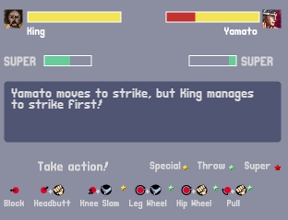 Lake City Rumble II is not really a typical "action" game: everything is controlled turn-by-turn, similar to some combat RPGs. The player selects a move and then the computer selects a move. Depending on the nature of both moves, many possible things could happen: you could end up missing, giving a one-hit-KO or barely scratching your enemy. Certain elements of the game, such as the Super bar which builds up over time and the different types of attacks, make the gameplay interesting and varied.

Love has delivered a realistic, believable game, once again proving she has an uncanny knack for writing great (and occasionally, even funny) dialogue and scene sequence. The game itself is highly polished, incorporating technical wizardry and good design. What may put some people off is the persistence players must go through to win; beating Qaisar does take time, but it is possible, I promise! What this reviewer particularly likes about this game is the setting, which gives playful allusion to her other games Digital: A Love Story and Don't Take it Personally, Babe, It Just Ain't Your Story.

Conclusively, Lake City Rumble II is not your run-of-the-mill fighting game, but instead offers an experience where choice and interpretation is everything if you want to pack a real punch into your attacks. Will you beat Qaisar, or accept defeat? Time to enter the arena.

In the fine tradition of fighting games everywhere, Qaisar has totally gamebreaking powers. You can't block him, he can heal himself up, and he deals monstrous damage.

After further bashing my head against Qaisar, I can add that you can't stop his special (which heals him), and that he almost always strikes first. So all you can really do is use specials and throws, and hope that he doesn't block or attack, respectively.

The main problem with this game is that it doesn't explain what determines who strikes first, if you both try to attack. One hint tells you that specials are faster than regular attacks, but what happens if they both pick regular attacks?

He has a very specific pattern. extremely predictable.

I think if you both use the same type of attack, both attacks miss. I'm not sure this includes supers, though.

Quaisar becomes a complete joke once you learn his pattern. He always blocks on his third turn if you only use a single special move on the previous two.

Special, special, throw. Repeat. As Yamato, block instead of throw.

I beat the game as all the characters, but I still didn't unlock any of the two supposed secret characters alluded to on the Help page.

Was that just a joke as part of the Help page being in the style of a magazine review of the game, or are there really 2 unlockable characters?

Select a character, then replace their name in the address bar with "qaisar"

Select a character, then replace their name in the address bar with "qaisar" or "lily"

I got the first secret character after beating the game with all the regular ones.

Qaisar - Zero surprise to any fighting game fans, beat the game with every character to unlock the final boss. Yes he is -just- as OP when you control him.

Lily Rook - Jake Rooks sister and a very humurous storyline, to unlock the game beat the game with Qaisar