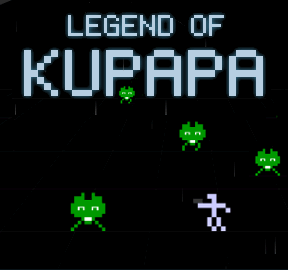 Once, the Kupapians were a peaceful folk. They knew not of the anger and hate that could fill one's soul, and as a result they were all of them blessed with lives of joy and harmony. Well, not all of them. There was one of the Kupapa people, shunned, and cast aside for he had no room in his heart for the love and elation that filled the rest of his kind. He was banished, a memory erased seemingly forever from the mind of the Kupapa people. And then the creatures came, mercilessly invading the Kupapa who, without a hint of animosity in their heart, could not defend themselves. They would be forced to turn to an outcast, and the outcast would become the Legend of Kupapa.

Beneath a blackened sky you become that outcast tasked with defending and training the people that once turned their backs upon you. In this strategy defense/shooter hybrid from Ahmet Ali Bati, not only do you fight back the hordes of grotesque enemies before they wipe your people out, you must raise an army and become its general. 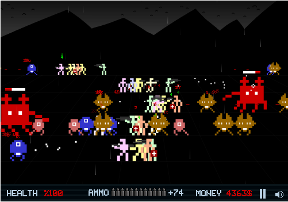 Most of the action takes place on the battlefield and is pretty simple to grasp. You can use either the [arrow] keys, or [WASD] to move while the [spacebar] lets you fire your equipped weapon. Get hit or let one of the enemies get from either side of the screen to the other (they come from both sides), and you'll take damage. Take too much, and, well, the Legend of Kupapa will be a short one. Of course, you won't have to go it alone for very long for between each stage you'll be given a number of options to improve your odds against the invading army.

First you can recruit and train soldiers. Depending on how many resources you have at your disposal you can bring onboard soldiers with a number of different weapons from pistols to shotguns, or you can even enlist medics to help regenerate the wounded on the field. After that you'll be taken to the upgrade panel where you can buy upgrades that affect both you and your army, or you can purchase more powerful weaponry for yourself. Just be careful, while you can freely roam about the entire battlefield, your soldiers can only travel back and forth on the row you assigned them to.

Can you regain the trust and respect of your people? Can you stop the oncoming nemesis? Will you indeed become the Legend of Kupapa? There's only one way to find out. 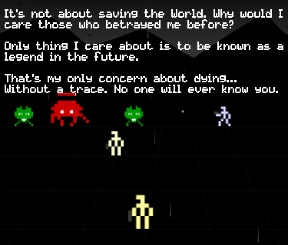 Analysis: Bati's freshman game offers up a compelling story wrapped in quality retro graphics and smooth, fast, yet casual gameplay. Definitely a little rough around the edges, Legend of Kupapa is nevertheless a pleasure to play.

In many ways, Legend is quite similar to games like Eternal Red and The Next Floor. The key difference here is that instead of building lifeless turrets and traps, you are recruiting fighters that think and act for themselves. Also, your character can actually die, upping the stakes and increasing the game's intensity. Forcing you to fill in the gaps of the defenses that you built yourself, though, is a formula that ultimately works and provides for a fun time largely because it lends a more casual flair to parent genres that have a tendency to get pretty deep. No, you can't upgrade each soldier five different ways from Sunday, nor can you cycle between eight different weapons in the blink of an eye, but that only means you get to focus more on the smooth controls and shooting down bad guys. And, come on, isn't that the point?

Maybe not. One of the things that really drew me into Legend of Kupapa was a narrative that I found to be gripping. True there are a number of grammatical flaws, but I find this is easily forgiven considering that English is clearly not Bati's native tongue. Beyond the occasional error, the story is surprisingly well written with a gritty and grim edge. There's a lot of emotion and cynicism buried in the paragraph or two that you are treated to between some of the levels, definitely enough to stir up the suspense and keep you playing on to read the next bit.

Even the production is pretty solid here. The Atari era graphics are neat, though going back that far might be too retro even for retro enthusiasts, I'll admit. Personally, it's not the blocky graphics that I liked so much as the pretty neat rain effects, the occasional forks of lightning that split the sky, and the clouds of black birds in the distance, all of which give the game a nice, apocalyptic, feel. Supporting all of this is a good backtrack that taps into a kind of adventurous, militaristic spirit that is a perfect fit to both the action and the story.

Of course, there's more than plenty room for improvement here. While the action in the game is suitably fast and satisfying, it does start slow and has a tendency to flirt a little too closely with repetition and tediousness towards the end. What's more, I don't think enough was done to identify your character apart from the rest of your troops, and later on when the playing field gets crowded, it can be a little too easy to lose you character. Even the narrative, which is easily one of the game's strongest points, ends with more fizzle than flair.

But here's the interesting thing about Legend of Kupapa. As flawed as its components can be, they end up working well at compensating for each other. Though the gameplay may wander into the realm of repetition, the story makes it worth it. The graphics might not be your cup of tea, but the smooth and quick action help you look past that. On top of that, an adjustable skill setting makes this title accessible to a wide audience. As a result, Legend of Kupapa performs well despite its flaws, and I can't wait to see what Bati comes up with next.

I think more should have been done to differentiate the planes, especially since the window is so tiny.

There was some bug where I died, but was able to keep playing. I had this for a few levels until I died for real. Now my save file is on a level that I don't have nearly enough troops to complete.

I got the same bug; I think it was because I died when I was reloading.

I stumbled across a strange bug: I died the first time I played (on medium), then when I restarted the game (still on medium, I assume), every enemy died with only a single shot from the pistol, including the big red "boss" enemies. Kind of odd.

Same as kaustic, after restarting I'm one-shotting everything out there, and I think my men might be invincible, to boot. They certainly aren't dying, even without having been upgraded, even when

they get dragged across the screen by the red tentacles. Is that supposed to be an instakill?

Anyway, I'm getting to see the story quickly, but yeah, not much of a game now.

Bug report: The "distribute troops" button seems to quit working once you fill the rows and have more than 11 troops in each row.

The ending was quite anti-climatic. You start the wave thinking it will be quite awesome, but as soon as you end the wave, it proclaims you're a legend and you can submit your score.

I liked this. I like the idea of causing players to change the way they play and think about the game simply because of the narrative, revealing nothing more than emotional shifts of your PC and the characters around you.

And the story is basically the definition of concise. Much better than the daunting walls of text in Braid. That said, like Reece, I was hoping for a heftier ending than just "You are a legend". I sort of took that for granted by wave 12 after all.

Gameplay-wise, I never died, so I never encountered the restart bug. Throwing guys with uzis at a problem always solves everything, I find. In this game, and in life as well. >.> (but the tentacle attack isn't an instakill...except maybe if you forgot to level up your ally health?)

I had that restart bug myself. It made the game much too easy. By the end, I had so many dudes that I was struggling for things to do. However, I think this is a great game concept.

Not being able too see the lines and not reading your review (sorry;-) I was wondering much how the game works when starring at the screenshots. I expected something fascinating... Well the lines mechanics was a bit dull as discovery. But maybe I should develop a new creative technique: Just look at the screenshots before reading the review or trying the game and try to imagine how you think the game could work. Maybe this might be a good start for a well of new gaming ideas :-)

I had this glitch where i paused and after i unpaused it, the game started, but the pause screen was still there. Although there a bunch of glitches in this game it's still a good one.