Ever thought that regular fairy tales aren't scary enough? We've all heard about the big bad wolf tricking a little girl and then swallowing her grandma, so that's old news. Which is why Cerebral Games went for a more Tim Burton-esque version, where the forest is full of thorns, huge spiders lurk in the dark and fluffy bunnies are locked in cages. Their Twisted Adventures: Little Red Riding Hood is a two parts spooky, one part sweet one-button puzzle platformer in which our young protagonist jumps around spinning globes in hopes of reaching her grandmother's house. To make Lil' Red Hoodie jump around, simply click when the arrow is pointing in the desired direction. The goal is to reach the farthest globe to the right, while collecting flowers, apples and bunnies. There are three apples to find and one fluffball to free in every level, and twelve levels in each of the three worlds (or five in the mobile version). To unlock the second and third world, you'll need a certain number of apples and rabbits. 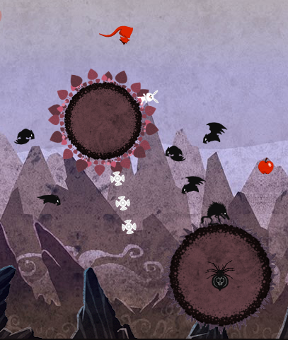 The jump mechanics are good enough, though they can be surprising at times: the jumps sometimes feel a bit too short, and it's easy enough to misdirect the little girl, sending her straight into the abyss. Luckily, the first world doesn't introduce too many obstacles early on, so there is time to get the feel for the physics. The difficulty doesn't follow a curve, and it can almost seem like the levels are in a random order, but this doesn't take away from the game's appeal. Rather, the difficulty is often up to you and whether you're really determined to collect every single flower. But even if you happen to find the game too hard, you'll want to keep playing, because it's so utterly enchanting. The delicate, yet eerie visual design goes hand in hand with the music-box soundtrack and makes for a perfect environment for this type of gameplay. And this is only the first installment of what will hopefully be a full series, so we can expect to continue our critter-liberating journey through the woods. Freedom for the bunnies!

Hi, I'm a member from the CerebralGames team; thanks for the review, but I wanted to add something: the free flash version has three different worlds, while the android paid version has five (that is, 60 levels!). We'd be really thankful if you can update that, thanks :)

*facepalm* I had a weird feeling the tag list was somewhat short... Fixing right now!