LostWinds2: Winter of the Melodias

Gently wafting down from the world of Wii Ware games, LostWinds2: Winter of the Melodias is an iOS port of the 2009 sequel to LostWinds, a game that also recently made its way from console to mobile marketplace. Frontier Development has created a fantastic sequel to an adorable and easily lovable game, translating the same sense of awe and wonder that made the original such a pleasure while adding new elements (literally) to toy around with. It's a platform adventure ("metroidvania") like few others, and once you get a taste of the richly animated world LostWinds2 has to offer, you'll sit down and absorb the entire game without hesitation. 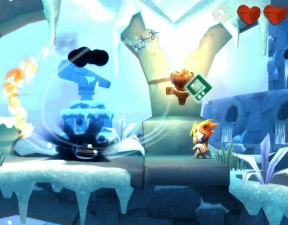 LostWinds2 controls surprisingly well for being on a device that lacks physical buttons. You can choose between a virtual d-pad for movement or stick with the tap-to-go method the game defaults to. The former is much more precise than the latter, and as such we recommend you switch to it right away. But, you know, follow your bliss! Toku hops up small ledges on his own, but for bigger gaps, you'll need to break out some wind power. Swiping the screen activates gusts of air courtesy of Enril the Wind Spirit. You can use these gusts to manipulate things in the environment, both for fun and for profit, or to toss Toku around like a paper bag in the wind.

In addition to using the wind as a glorified springboard, you also have a few special abilities you can activate. Pinching the screen captures objects in mid-air, allowing you to hold them in place so you can send them flying with a big gust of air. In areas where snow falls, you can even craft snowballs in mid-air, using them for breaking ice barriers or just making heaps of snow on the ground. And finally, the wind vortex plays a strong part in the game, allowing you to funnel other elements like fire and water around the screen so you can use them to, say, light torches, burn flammable objects, make plants grow, or deal with enemies. 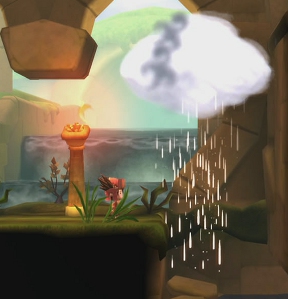 This is just a small sampling of the things you can do in LostWinds2. The list of environmental interactions keeps growing the longer you play (like being able to switch between seasons), and no matter what you're trying to accomplish, you'll always be convinced there's more than one way to do it, whether it be a creative wind ride over a ledge or a series of vortices that just manages to melt a block of ice. LostWinds2 gives you a lot of freedom, both in terms of what you do and where you go, as the level design is open and encourages backtracking once you get new abilities. Metroidvania to the core!

Analysis: For those of us who first came to LostWinds2 on the Wii Ware platform, the first question to ask when eyeing the iOS release is this: how well does it control without physical buttons? The answer is "quite well", though purists will still narrow an eye from time to time when little hiccups in the game would have been prevented with solid controls in your hand. Still, for the generation that didn't grow up with joysticks and NES controllers in their hands, nothing will feel amiss in this smartly-built port.

While the story isn't anything to speak of, the level and puzzle design is definitely a high point of the game. The world is filled with high ledges, secret tunnels, and non-essential items hiding just out of sight or just out of reach. To collect everything, you'll need to do some backtracking, picking up new abilities and returning to earlier areas play clean up. But since moving around in this game is so much fun, you won't be frustrated in the least by going backwards to go forwards. And with intricate, creative visuals like these, there's always something lovely to look at.

There's a lot to do and a lot to experience in LostWinds2. It's a big, gorgeous game created with luxuriously imaginative visuals that often look like they were taken from an animated feature film. The sense of wonder you'll feel while exploring the game's world and using various elements to interact with the environment is priceless, a feeling so few games manage to convey these days. LostWinds2 is easily one of the best platform adventure games on the iOS market, no matter the player's preferences or skill level.