The following is a reader-submitted game review by Marcus:
Too often do we come across Flash games (especially shooters) that are either too brief or too repetitive. Luminara by John Cooney is a brilliant example of how to avoid those problems.

It's simple enough: you are a dot and you fire bullets. Use a combination of keyboard and mouse for control: cursor arrow keys move your ship about; aim and fire with the mouse. And like any good game, the premise always stays exactly that simple. What gets more complex are the subsequent waves of enemies that come at you. 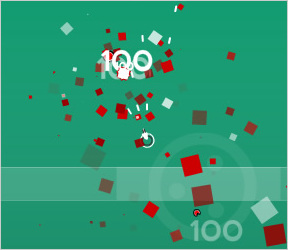 Ranging from meandering green boxes and laser-wielding orange triangles to ominously growing orange squares, Luminara knows how to do justice to the concept of "increasing difficulty". It never gets too hard, but it never lets up on you either. There are no intricacies to level design, but the seemingly endless combinations of enemies and numbers is more than enough variation.

But to make sure that the game doesn't turn into a mindless exercise in "click-move-repeat", John has thrown in an absolutely wonderful host of power-ups, ranging from a boost in your bullet size to a powerful auto-lock laser that literally shakes the entire game environment to its foundation.

Despite being such a graphics intensive game—the sheer number of objects rendered at any given time is mind-boggling—the game engine handles the challenge well, automatically adjusting quality as needed to cope with the number of pixels moving about the play field.

The music that accompanies the game is also a huge draw, hectic enough to get you excited but not loud enough to make you turn off the speakers. Sound effects are finely balanced, as well.

Luminara is deceptively simple, needing no instructions to pick-up and play. But the minimalism here shouldn't be chalked up to paltry design or shoddy work. Instead, it's the practiced minimalism of good game design at work.

Very fun. I like how he can make up all the different enemys. It's original and has a lot of replay value.

Wow, I was firing so wildly that I clicked a link by accident and exited the game. (The "Buddy" powerup is my favourite!)

Got a score of 337,015 on my first run through. Good enough for 76th place, although I doubt it will stay there for long.

Gar: You can hold down the mouse button for continuous fire. That might help with the wild clicking.

The game is decent. I had a real problem locating the cursor sometimes, though. Perhaps it should be made larger, or given a high contrast? As someone else has mentioned, the ads were placed very annoyingly, but you can circumvent them by resizing the window the game opens in to only be as large as the game window. That helps a lot.

I think it might have been better if the game just went on forever, with progressively harder waves, rather than having a definite end. That does keep it from dragging on too long, on the plus side!

I feel stupid...I didn't know you could fly around...I survived ten levels by staying in the middle.

I usually like to include a short "how to" with the controls for those needing a little help getting started. I think I'll edit Marcus' review to include that.

As good as it's ability to cope with graphics intensity may be, it wasn't enough to stop it from slowing down on my system. But then, I can't even run Psychonauts, so the problem could be on my end. Good game nonetheless, and definitely requires you to pay attention (any lack on this part, of course, results in you getting killed later).

Sweet, I just finished it. Hey Jay, you may want to make a note that when submitting your highscore, the game doesn't call attention to the fact that you can neither resubmit after changing your name nor that you're given a default name in the first place. I got a score in, IIRC, the 500K-600K range (and 68th place or so as of the writing) but didn't realize until after I submitted my score that I needed to change my name, and then it was a bit too late to do so.

I agree that it could have gone on longer, but as it is it is a nice, short, and sweet game, and I'd rather have a game that ends too soon and leaves me wanting more than a game that goes on longer than it should and eventually wears me out on it.

This doesn't make sense - it's more fun to lose than to win?

Fantastic, and thanks for hosting it Jay. 80th Place! Whee... I need to get me a mouse.

Man, my computer was starting to go really slow when the game window got crazy.
I also accidentally clicked a link... bah.

Very nice. The enemies reminded me of math class :)
Nothing in the graphics or music really stood out, which is a feature of all good graphics and music. I mean, graphics aren't supposed to take you out of the game and have you going "whoaa...." like you're watching a cinematic or something. They're supposed to enhance the experience. I think this will become the gold standard of flash shooters :)

Hm, let's see:
- Beat the game with a top-100-score on first try? Check.
- While not even realizing that you're supposed to move with the cursor keys? Check.
Something tells me that this game is a tad on the easy side... well, at least as long as you just unshakably sit there in the middle of the screen and concentrate on blasting every geometric shape that dares to come close. Stylish visuals, though. Reminds me a bit of Kenta Cho's games.

Wow, I love the visuals. And the "Awesome" meter is a great touch. Best shooter I've played in a long time.

Thanks for another great review :).

This looks like a lot of fun. I'm going to waste so much of my free time on this.

One question - How do you collect the power ups?

Uri - To collect power-ups, just move your ship to intersect the power-up and you will collect it automatically.

Yes, I clicked an ad too... sniff. That's flash's problem though, not the author's.

First playthrough, got over a million points and beat the game. Bang.

I noticed that some of the tiny turret buddies are named after people who worked on the game.

And if it isn't immediately obvious, you can also use the WASD keys to steer.

The problem I had with this game was I couldnt see where I was, and where I was shooting at. With so much happening, it is easy to lose track of where you are--especially when you get the crazy lazer!

thanks though
I love power-ups

Honestly, I can barely see where my pointer is located most of the time, I click on links outside the field way too often.

There are problems that I would like to see corrected. Lots of potential though.

Arrg! I can't see either my little ship or the pointer sometimes.

I died because after a new level I wasn't sure where the enemies came up at because they just sort of come up right on top of you, and then the explosions are so heavy I forgot where I was.

Great fun! I enjoy the paper effects immensely, really add to the kinetic frenzy of the game. Good find, Marcus.

Fun game, but I just kept losing my ship and cursor in all the mess - often my eye will follow a piece of white confetti/shrapnel instead of the ship. A larger sized ship and a higher contrast cursor would help a lot, IMHO.

I beat the game and got a score of NaN on my first try. So yeah, beat that.

I honestly don't know how I won, given that I didn't know where my ship was or where I was firing a good half of the time.

at first i was dubious, but it is indeed pretty easy to win the game without ever moving. it's not that fun, though, since you never get to pick up any power-ups. still, i think it actually makes the game easier. the first time i played the game i moved around, grabbing every power-up i could and i maybe got half-way through. the second time i just stayed in the middle, shooting like mad and finished the game.

check highscore number 55. I am swarm420

Question: Isn't it possible just to keep one of those shooting enemies alive and get an indefinite amount of points? While this would take time, it is doable...

This is a stunning, lovely little game! I'll add my voice to those that find it a little hard to dig the ship and the aimpoint out of the visual chaos. They both need to be easier to distinguish against the chaotic background. It would be better if the explosion debris was all one color, or had some other visual separation cue as well.

Wow. Best online shooter ever. I really liked the varied enemies, particularly the shuriken ninja ones and the enlarging orange squares. I was unreasonably scared by the fast-moving diamonds though.

Great game, died only one time because of the fast-moving triangular ships (appears just before the blue ball). 658,100 points, but got the 53th place. Maybe there's a limit of points, because the first, second and third place had the same points! But the purple diamonds weren't very dangerous, since if you don't move, they stop moving at a safe distance.

it feels like a pastel geometry wars. also i like the little touches like when you get the buddy upgrade, they have usernames (rock on ATDK26)

Definitely needs a much bigger targeting reticle. It's very easy to lose the tiny targeting cursor among all the bullets, enemies, explosions, etc.

use P for pause or to adjust the graphic quality. Hmmm...how does 'lackluster' look....

I believe that this is a Great Game. The explosions of color are great and I think the music is fantatsic. Only down points are not being able to locate the targeting cursor and not knowing when Luminara 2 is coming out. Will there be one?

I love the music! Great game!

Although a coupla times I was like, "I'M GONNA RUSH THIS GUYYY!!!" and ended up smashing into it. XD

Pretty fun, not boring at all, it really has you on your toes. :D